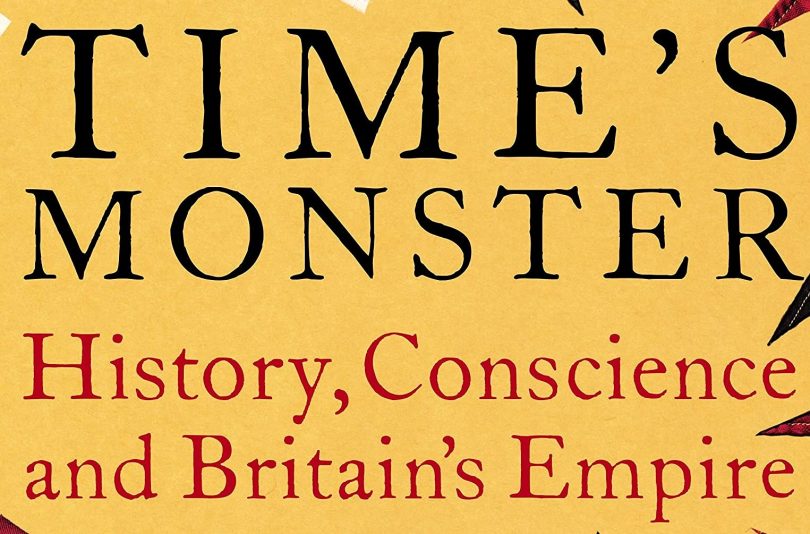 With a double chair in history at Stanford University, it may seem surprising that the author should have chosen to write an uncompromising polemic against her own discipline.  Time’s monster for her is history as narrated by historians, who also determine the events they predict and then salve their guilty conscience with pseudo-ethical ends to justify evil means.  Most of us might agree with her about some instances; but she takes no prisoners in a sweeping condemnation of almost all Western historiography from Thucydides and Herodotus, through Enlightenment Utilitarianism and Victorian Social Darwinism, down to our own postcolonial times.  Only a small handful of anticolonial fellow-warriors like Shashi Tharoor, Priyamvada Gopal and Afua Hirsch escape her censure.

A conceptual problem about this from the outset is a failure to define and differentiate history, what actually happened, historiography, how historians interpreted it, and historicism, how it was hijacked to legitimise outcomes.  Most of Satia’s charge-sheet uses these terms as though they are interchangeable.  Citing examples as diverse as Alan Bennet’s History Boys and Winston Churchill, Satia asserts: “Historians were prominent among the architects of British power from the eighteenth century until very recently, as both policymakers and advisors to other policymakers….   Modern imperialism promised progress. It was grounded in a vision of history understood as necessarily progress-oriented.”

Satia makes it clear that this need not have involved conscious deception and that some individuals might even have been sincere in their progressive intentions.  “For the most part, empire was not the work of villains”, she concedes, “but of people who believed they acted conscientiously….The British Empire, especially, embodied the apparent ideological contradiction of ‘liberal imperialism.’ But this was in fact an approach to conquest that preemptively insured against ethical doubt: the empire was an exploitative and repressive political formation built by men who often sincerely believed they were in the business of spreading liberty.”

What follows is a blow by blow account of the many instances in which historians have conspired to delude themselves and others, resulting in tragic outcomes.  Much of this is highly selective, citing only sources that fit Satia’s hypothesis and claiming even major British soul-searching as exercises in moral exculpation.  She presents the parliamentary impeachment of the first British Governor-General of India, Warren Hastings, led by the fanatically anti-imperial Edmund Burke, as merely paving the way for worse to come in colonial Bengal.  She is more scathing about the “virtuous heroism” of British abolition of slavery as a moral evasion of Britain’s “central role” in the transatlantic slave trade.  Even twentieth century decolonisation is condemned for entailing “horrendous violence”, as she accuses the British of partition-mania in regions as diverse as India, Cyprus, Palestine and Ireland, regardless of the very different local conflicts they were trying to resolve.

“We might …ask,” says Satia, “how conscience was managed, what enabled individuals engaged in such crimes to believe and claim that they were enacting good intentions.”  But instead of an open-minded enquiry into people’s thoughts, she goes on to equate any such process as akin to excusing the atrocities of Nazism because of benign intentions.  The equation between the yet unpunished crimes of British imperialism and those prosecuted at Nuremburg figures prominently in this book.  “Nazi objectives were openly murderous…” Satia tells us, “but the ideology of liberal empire required respectable cover, and lasted longer because of it.”

A telling example she offers of how ethical conscience could be distorted is of a Quaker gun manufacturer reconciling “necessary” violence with his pacifism.  She rightly points to the emergence of “great man” history, epitomised by leaders as disparate as Byron and Winston Churchill, to sanitise dubious events.  She is equally critical of Marxist determinism for drawing on Enlightenment ideas of progress.

Despite such wider comparisons, this book concentrates almost exclusively on the British Empire, and especially on the Raj in India.  But the Indian illustrations Satia chooses almost invariably ignore empirical evidence contrary to her theoretical case for the prosecution.  So she castigates British Orientalists for perpetuating notions of Oriental despotism, but ignores the work of Orientalists like Sir William Jones and James Prinsep in rediscovering and celebrating India’s classical heritage.  We are told that the liberal reformers who abolished sati (the immolation of Hindu widows), female infanticide and Thuggee (ritual murders) were merely “exoticising the image of India” and, by contrast, “justifying the British presence in a humane and moral light.”

Thomas Macaulay as the archetypal historian-policy-maker is a particular bugbear, condemned as much for his codification of Indian criminal law (still in force today) as for his essays on imperial founders like Clive and Warren Hastings.  Satia repeatedly refers to the Mutiny of 1857 as a “massive” national uprising against the British, but fails to mention that it was mainly feudal, confined to a tiny portion of British India and suppressed with the backing of both the vast majority of Indian sepoys and the urban middle class.  She refers to “racist accounts of Indian atrocities” but ignores the very real Cawnpore massacres of British women and children.  We are told that General Dyer, who ordered the Amritsar massacre of 1919, became a “national hero”, but not that his conduct was debated and condemned in Parliament and that he was forced to resign.

This narrative accuses the Raj of dividing Indians, especially by granting separate electorates to Muslims, although this was the demand of Muslim representatives.  The Raj is held responsible for India’s partition, ignoring its strenuous attempts to broker a pan-Indian federation from the 1930s down to the failed Cabinet Mission Plan of 1946.  The British are blamed for confining their troops to barracks during India’s horrendous partition riots, but we’re not told this was at the request of Prime Minister Nehru.  Satia repeats the now outdated “drain” theory of imperialist economic exploitation, but ignores more recent computation by Indian economic historians of the huge benefits of British capital and technology to India’s own industrialisation.  Instead she welcomes Mahatma Gandhi’s opposition to industrialism.

“The post-independence Indian government,” Satia tells us, “never really questioned the moral and intellectual underpinnings of the colonial project from which it emerged ….  Such ambivalence is, of course, the very mark of that state’s ‘postcolonial’ nature, the seemingly incurable hangover of colonialism.”  This would have been news to modernising nationalist leaders like Nehru, though Satia would attribute this to the false consciousness imperialism fostered among its children.

This book credits the Romantic sensibility and near-mystical poetic imagination as laying the basis for a critical, twentieth century remaking of history, seeking to expose “the scandal of empire”.  Satia prefers Hindu beliefs in cyclical time and reincarnation to the linear, progress-oriented narratives of Abrahamic religions. “The teleological format of history,” she complains, “…enabled tolerance of pain as merely birthing pain in the cause of some greater epochal labour.”  Ironically, much of her own counter-thesis might appear equally teleological in positing evil empire as the end-result of every benevolent intention of liberal imperialism.

This book blames European colonialism for promoting the twentieth century idea of a “homogeneous ethno-nation-state”, but it ignores the role of empires, both Western and Eastern, for millennia in accommodating ethnic and sectarian difference.  It has surprisingly little to say about the present-day imperialism of powers like America, Russia, China and India that have long replaced Britain’s; but it castigates continuing British imperial illusions for fuelling Brexit.

“While Britain continues to celebrate the empire’s role in defeating Nazism,” Satia observes, “formerly fringe neo-Nazi views of non-white immigration to Britain have fuelled the xenophobic Brexit movement.”  She concludes this bleak analysis of postcolonial Britain with the plaint that her “British publishers have co-opted even anticolonial thought into the neo-imperial project of extending British cultural influence” by refusing to relinquish Indian rights to this book.