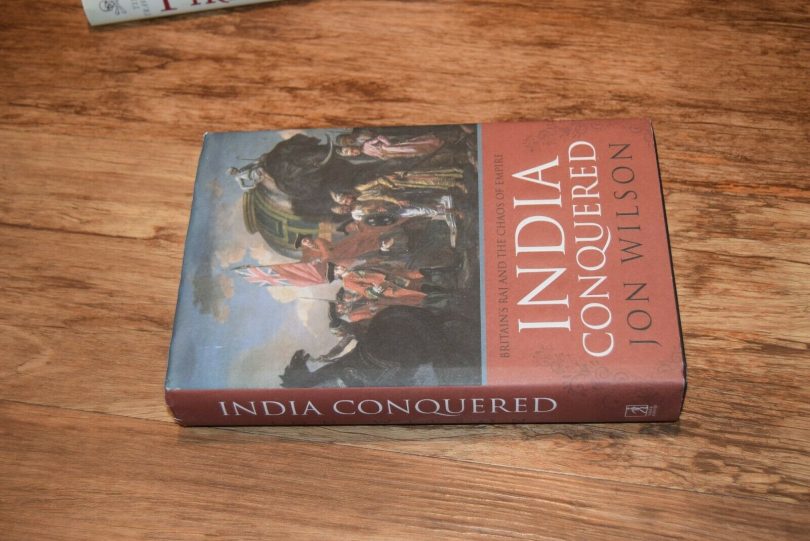 Yet another history of the Raj invites comparison with its two most distinguished predecessors, Penderel Moon’s The British Conquest & Dominion of India (1989) and Lawrence James’s more recent Raj: The Making & Unmaking of British India (1997). Both were sympathetic to Indian nationalism, critical of British racism and yet objective in their assessment of the remarkable institutional foundations of British dominion and its enduring legacies in independent India.

Jon Wilson’s book makes no such attempt at historical balance and sets out to demolish what it labels “The Great Delusion” that the Raj had anything positive to offer rulers or ruled.  It presents an ideologically driven thesis that the British empire in India was won and maintained by ruthless violence, that it created chaos instead of order and that its administrators were driven, not by any civilising mission, but by paranoid anxiety and fear of those they governed.  Wilson’s research has been extensive, both in the usual archives and in drawing on new work by other academics.  It demonstrates how the same factual sources can lead to diametrically opposite historical theorising.

Wilson’s thesis rests on an idealised picture of India before the British conquest.  The despotic Mughal Empire, imposed by Central Asian, Muslim invaders, is characterised as a regime of “friendship and conversation”, affection and negotiation.  Its collapse, we are told, far from creating a political vacuum which sucked in the British, saw the emergence of strong regional native states.  The East India Company, “prickly”, “anxious” and “paranoid” at every turn, swallowed up these Indian rivals because it envied their success.  It then set about replacing their friendly, consensual, locally based administration with its own highly bureaucratic, violent and autocratic forms of governance and justice.

The problem with this bleak, monochrome picture is that it hugely over-simplifies the complexities of British and Indian politics over a span of three centuries, constantly reducing its protagonists to one-dimensional stereotypes.  This is most evident in the characterisation of imperial administrators as “aloof”, “anxious” and reluctant to mix with natives.  Though undoubtedly true of many during the Victorian high noon, especially after the Indian uprising of 1857, it’s a stereotype that’s hard to sustain during earlier and later phases.

It’s true, as Wilson reminds us, that Robert Clive spoke no Asian languages.  But why no mention that his multi-lingual successor Warren Hastings spoke fluent Bengali, Hindustani and Persian and commissioned translations of the Sanskrit classics?  Conspicuous by their absence are the White Mughals, the late 18th and early 19th century British “nabobs” who enthusiastically went native, took Indian wives and blended into Indian life as seamlessly as any Mughal aristocrat from Samarkand.

As for the Indian Civil Service, dubbed “heaven-born” for their incorruptibility, this book is scornful of their talents or commitment.  It says nothing of their recruitment (from the 1850s on) by open, competitive examination, which attracted some of Britain’s best brains and made them the envy of Europe, well ahead of Britain’s own domestic civil service.  Wilson’s picture of the typical British district officer portrays him as a lazy, remote, anxious figure, skulking in the shade of his official bungalow and clubhouse.  No inkling here that ICS officers were required to speak two Indian languages and spent most of their time out in the midday sun, touring remote areas on foot or horseback, dispensing quick justice to villages that still miss them today, studying local flora, fauna and social customs and writing valuable books about them.

The most conspicuous absence in Wilson’s evil empire is the active consent and cooperation of Indians themselves.  No regime based on violence alone could have enabled a maximum of 100,000 Europeans to rule for two centuries a land of 400 million.  Wilson mentions that by the 1940s most ICS officers were Indian, as were most Indian Army officers.  He also concedes that the judiciary, universities, professions and business had long before been “Indianised” and that the new Indian middle classes were active in elected local and provincial governments.  But he sees none of this as a genuine partnership between Britons and Indians that produced the most developed civil society in modern Asia.  Instead, the very idea of India is critiqued as a centralising, imperial construct, still used after independence to crush local identities.

This book is important because it seeks, however unsuccessfully, to substantiate so much of the anti-imperial guilt of the British left today.  Most depressing of all is its conclusion that the end of empire left the imperial metropolis itself with little more than the insular racism of Enoch Powell.  No recognition here of the multicultural legacies that make Britain so cosmopolitan, nor of the intellectual curiosity that still fuels historical research into its imperial past.