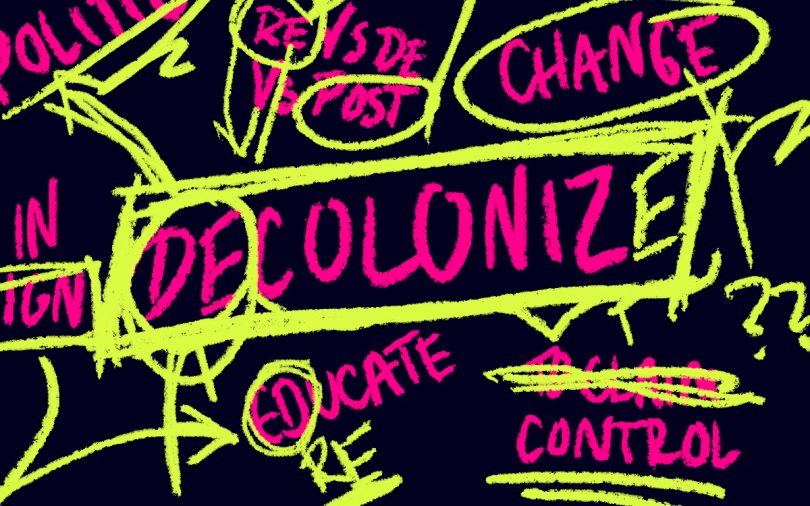 Decolonising theories can offer hypotheses for establishing disciplinary knowledge, but to date they lack adequate criteria with which to test the truth of their claims. Some advocates of post-colonial and decolonial theories are at best confused about truth, and at worst, dishonest.

For the purposes of this article, I take decolonising discourses to be those theories that are more concerned with the social processes of knowledge construction rather than issues of how truth is validated. For example, Andreotti and de Souza write, ‘We define postcolonial theories as tools-for-thinking rather than theories of truth. In this sense, we acknowledge their situatedness and partiality’.[1] While post-colonial theory originated among scholars in newly independent colonies in the 1980s and 1990s and focused on the cultural interrelationships between the artistic and intellectual classes of former colonial and colonised countries, the focus of decolonising theories focuses on asymmetric power relations between immigrant and native groups within the former colonial country. Where the former retains some research interest in the disciplines of politics and economics, the latter is influenced mainly by psychology.

Andreotti and de Souza’s definition tells us something important about the current moment when cultural politics of identity, which include calls to decolonise, influences both the external facing (promotion, procurement, HR policies) and internal facing (departmental formal and informal codes, and curricula) relationships in education. It tells us that advocates of some post-colonial and decolonial theories are at best confused about truth, and at worst, dishonest. Note that Andreotti and de Souza’s statement defines post-colonial theories as supplying tools for thinking; and by implication non-post-colonial theories that aim at truth, do not. Their implication is that theories aiming to find more truthful knowledge do not require thinking. If so, then on what do such knowledge claims rest? For supporters of decolonising established epistemology, the answer is rooted in a particularly reductive version of social constructivism that maps socio-political relations onto relations of knowledge.

If disciplinary knowledge aiming at truth has had, and continues to have, high social status, it is because it benefits those in power. The contest is often presented as one between embodied and abstract knowledge. Bhambra sees abstraction of formal or disciplinary knowledge as a deracinated form of knowledge which, she alleges, has been historically created on the back of colonialism and/or slavery.[2] Its continued presence and valorisation in academia perpetuates harmful influences of an original historical act of oppression. Formal knowledge, in the decolonising framework, has no cognitive properties or effects independent of socio-political relations; its status depends on the powerplays of established academics who, in teaching disciplinary knowledge, are teaching students not to think. Thinking, remember, is something claimed to be offered only by decolonising theories.

This presents the decolonising critics with a quandary: one can think until the cows come home. But if we want someone to believe what we say, to accept our claims as valid and draw on them as their guides to action, then some criterion of validity is needed. Decolonising theories do in fact need a theory of truth, and they have one. But they seem unable to state it explicitly, maybe because to do so might draw attention to its severe epistemological and ethical limitations. If established disciplinary criteria for judging the validity of a knowledge claim, whether that be through experimental, empirical or logical methods, are ruled out of court as ‘the master’s tools’ as Audrey Lorde would have it, what replaces them? ‘Situatedness and partiality’ do not offer the same scope of generalisability or prediction as knowledge claims based on established disciplinary standards. Let’s look at two examples where decolonising lens is applied to disciplinary knowledge in history.

First: Gauri Viswanathan’s historical account of the introduction of English literature into India’s education system in 1832 argues that the British government’s main purpose in introducing the study of English literature in Indian schools was to maintain control of Indian subjects through an exclusionary process of cultural othering.[3] Her argument owes much to Edward Said’s influential account of cultural processes of othering. The concept of othering is the imposition of normative standards of a dominant culture upon the cultural practices of another subordinate culture. Cultural and academic judgments are produced by an accumulative process of shared ideas and values but participation in this process is not equal. In this frame, any binary categories which describe features of either the dominant or subordinate culture and carry positive or negative charges respectively. For Viswanathan, there is little difference between the hard power of colonial military might and the teaching of English literature. Both collude to disavow the difference of colonialist power: instead its standards and practices are presented as universal norms.

By way of illustration, Viswanathan refers to Horace Wilson, an administrator for the East India Trade Company, who arrived in Calcutta in 1808, as part of a moment when the British administrators ‘discovered a wholly unexpected ally in English literature to maintain control over their subjects in the guise of a liberal education.’ (p.85). In the process, ‘culturally unambiguous texts’ (p.97) are presented as the voice of authority whose truth depends upon designating other truths as falsehoods. Yet Wilson was one of many Orientalists whose knowledge and respect for truths contained in ancient Sanskrit texts led them to undertake works of translation as well as grammatical and philological work. This does not suggest that they thought they were dealing with falsehoods or were interested in attributing any negative cultural charge to Sanskrit. This, of course, does not mean that Indian scholars themselves were afforded the same respect or equal treatment as Sanskrit itself. The Asiatic Society of Bengal, for example, established by William Jones in 1784, only accepted Indian members in 1829.

Second example: according to Levitin, Edward Said’s claim that the Bibliothèque Oriental (1697), was an example of marginalising or othering indigenous scholars and imposing western classification systems on existing Oriental knowledge, has been proven to be factually incorrect.[4] In his discussion of Oriental historical scholarship, Levitin points out that d’Herblot, the author of the Bibliothèque, preferred to refer to Arab scholars. He used his alphabetical classification system on the advice of Ottoman scholar Katip Celebi.

There are kernels of truth and insights in both Viswanthan’s and Said’s work.  But their sacrifice of historical empirical evidence to the needs of a critical theory of society, actually obscures the complexities of historical relationships, motivations and events. It tells us that the political commitments of the authors outweigh their commitment to truthful knowledge: or rather than their theory of truth conflates it with the subjective truth of feelings and spontaneous response. Subjective interpretation and response have a place: in the arts and in aesthetics, not in the social sciences, humanities (where it has a role, but not a primary one), and certainly not in democratic politics.

The fact is that established scholarly work is capable of expansion and self-correction. Disciplinary knowledge offers the intellectual resources with which new questions can be posed to established interpretations and, through undertaking the admittedly arduous work of scholarly study, can yield more complex and compelling interpretations. The challenges presented by decolonising theories can offer interesting and potentially fruitful hypotheses for established disciplinary knowledge, but to date they lack adequate criteria with which to test claims. One consequence is that advocates of decolonising discourses often end up using a fair few binary categories themselves and risk re-racializing knowledge itself.

Alka Sehgal-Cuthbert is co-editor and contributing author of What Should Schools Teach: Disciplines, Subjects and the Pursuit of Truth