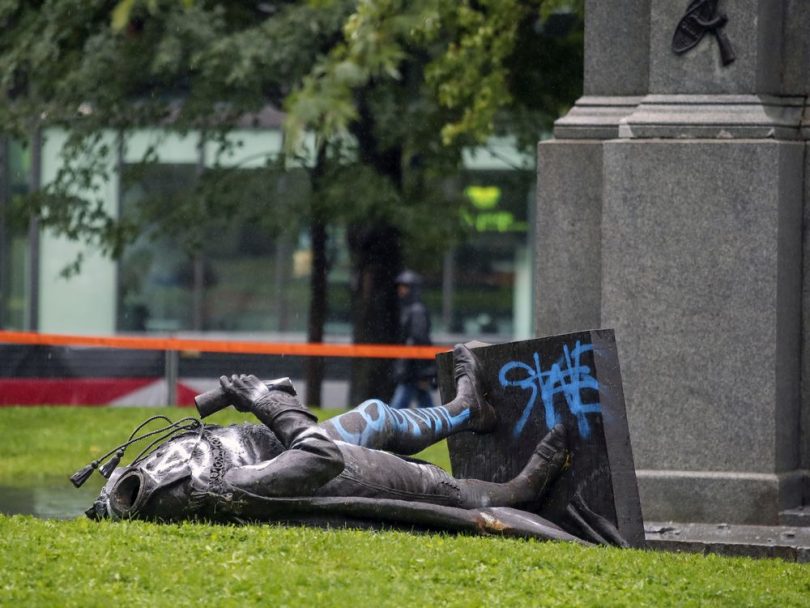 Why is scrutiny overwhelmingly directed onto European empires, especially the British? The reason is that the real target of today’s anti-colonialists is the West or, more precisely, the Anglo-American liberal world order that has prevailed since 1945. Anti-Western Westerners risk sawing off the very branch on which they so comfortably sit.

It is customary on the Left to dismiss the “culture wars” as a Right-wing distraction. The former Labour minister Lord Adonis has asserted that the Right’s “stoking” of the culture wars is designed to hide the Government’s “lack of substance”. And in their joint submission to the Times Education Commission, he and Tony Blair claimed that the Higher Education (Freedom of Speech) Bill is “a reform in search of a problem since free speech is hardly a key issue on university campuses”.   They could not be more wrong. Not only do they appear to be ignoring the scale of the assault on our values in universities and beyond, but the significance of it too.

Foreign and domestic policy is profoundly shaped by national identity and culture. A nation’s identity draws from its past, and so disputes over history have significant implications.  Empires have been the norm throughout history. While the transatlantic slave trade is taught in British schools, the Ottoman Empire, which colonised swathes of Europe and was involved in the Barbary slave trade, is barely touched upon.  Why is the bright light of scrutiny primarily directed onto European empires, especially the British one? The reason is that the real target of today’s anti-colonialists is the West or, more precisely, the Anglo-American liberal world order that has prevailed since 1945. The rows about Rhodes and slavery are not about the past at all; they’re about the present.

To undermine the West’s allegedly oppressive international and national orders, the anti-colonialists have to undermine faith in them. That is why “decolonialists” propagate the phrase “colonialism and slavery”, implying that the two were identical and that slavery is Britain’s dirty secret, epitomising its essential racism. This, they claim, is who we are and must repudiate. This is why Rhodes and his like must fall.

Politically, this makes sense. If you want to make others do your bidding, it is helpful to subvert their self-confidence. But in this, anti-colonialists at home are allied – inadvertently, no doubt – with illiberal regimes abroad.  If Henry Kissinger is to be believed, ever since Sun Tzu’s Art of War, Chinese realpolitik has placed a premium on gaining a psychological advantage. So, in 2011 a British diplomat in China was told: “What you have to remember is that you come from a weak and declining nation”. And when, in July 2020, Britain criticised the Chinese regime for trampling over the Sino-British Joint Declaration of 1984 on Hong Kong, Beijing’s ambassador was quick to dismiss the criticism as outdated colonial interference.

America now seems to accept this narrative. US Ambassador to the UN, Linda Thomas-Greenfield, argued that she has seen for herself “how the original sin of slavery weaved white supremacy into our founding documents and principles”. The US has to “acknowledge that we are an imperfect union” she continued “and have been since the beginning”.

Whether in the case of China and Russia today, or possibly some future Islamic State, a prerequisite for their rise is a degree of confidence and civilisational purpose. What does the West have to offer to counter these highly illiberal states and social forces? What is the glue that holds free countries together with a common purpose to defend their shared institutional order, upon which their rights and freedoms – all highly fragile and historically contingent – now rest?

The desire among so-called progressives to undermine the West, deconstruct its morally justifying narrative, and overthrow its institutional order is an impulse that, ironically, takes for granted a more assured Western hegemony. The West’s post-1945 boom, which helped fund the welfare state and universities throughout Western Europe, provided the post-1968 generation of Left-wing intellectuals – the ideological architects of today’s social justice movements – with a false sense of security.

They could call for revolution in the expectation that, if their dreams ever materialised, the West could become a benign force of global change. However, in the present context of rising illiberal “civilisational-states” and the weakening US and UK – in large part because of the raging culture wars – anti-Western Westerners risk sawing off the very branch on which they so comfortably sit.

With the increasingly top-down enforcement of faddish “decolonisation” across universities, and the censure of “heterodox” ideas across British institutional life, Adonis and Blair could not be more misguided. The outcome of these struggles over history and identity will determine whether the British remain willing to identify with “Global Britain” in playing a role that builds on, rather than repudiates, the liberal order it has helped build. In turn, that outcome will be determined by the defence of the freedom to challenge the new “woke” secular theology sweeping across the Anglophone world.

Doug Stokes is Professor & Head of Research and Development, Strategy and Security Institute (SSI), University of Exeter; The Thomas Telford Associate Fellow, Council on Geo-Strategy; and an advisory council member of the Free Speech Union.