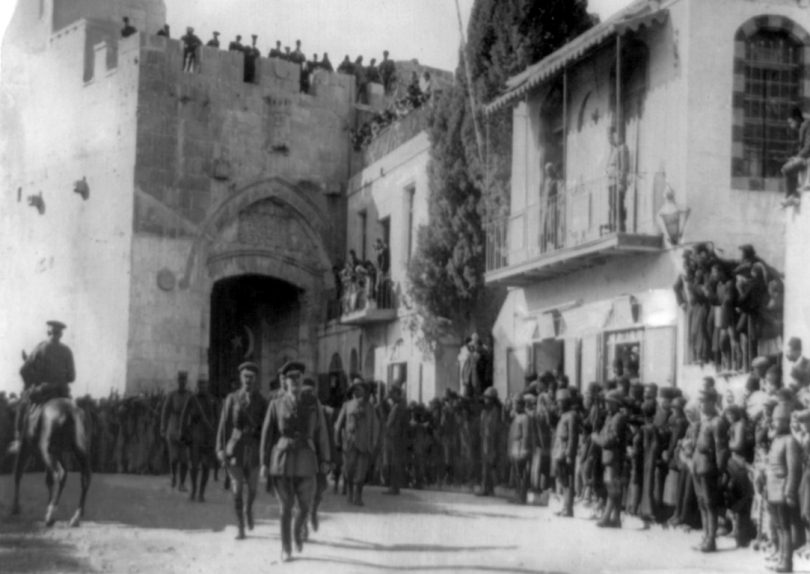 More than a century has passed since the British won control of Jerusalem during the First World War by defeating the Ottoman Turks and thereby altering profoundly the modern history of the fabled holy city.

The victory that came on Dec. 9, 1917 was achieved under the command of the stentorian Gen. Edmund Allenby, and when he strode into Jerusalem two days later (accompanied by T.E. Lawrence “of Arabia”) he did so as liberator.

The British Prime Minister, David Lloyd George, had declared that he wanted Allenby to win Jerusalem by Christmas as a “present” for the war-weary British people. And this he did, setting off widespread celebrations, especially amongst those who saw the victory as evidence of Britain’s stated commitment to the establishment of a new Jewish national homeland in a wholly reconfigured Middle East.

Defeating the Ottomans was the main precondition for such a reconfiguration, although in so doing the British completed an about-face in their long-time support of the Ottoman Empire as a bulwark against regional Russian expansionism.

The earlier courting of the Turkish sultan by imperial Germany in its late 19th century bid to exert influence in the Middle East had forced a sea-change in Britain’s policy concerning the old so-called “Eastern Question.”  The much-publicized sight of Germany’s Kaiser Wilhelm II mounted on horseback and parading regally into Jerusalem in 1898 had left the British with no illusions as to the direction in which he was taking his increasingly robust and militaristic country. By the time war came in 1914 the Germans and Ottomans were allies, which meant that ultimately their joint defeat was necessarily key to Britain’s military strategy.

Four years later, therefore, 400 years of Ottoman imperial rule in the Middle East came to an end and in its place was put that of the victorious Anglo-French allies. Great change was portended. Both the Jews and the multifarious Arabs assumed they would now each be able to achieve national status.  The British, for their part, had promised as much to certain of the Arabs in 1915, and then to the Jews more broadly through the Balfour Declaration of two years later.

All parties, from the Great Powers — at least initially — to Prince Feisal, the acknowledged leader of the Arabs, to Chaim Weizmann, the indefatigable head of the Zionist Organization, believed the vacuum created by the fall of the Ottomans could, and should, be filled by a number of new states to be formed on the national principle.

Inspired by the great Victorian British Prime Minister, William Ewart Gladstone, American President Woodrow Wilson had made, of course, this principle a key part of his idealistic “Fourteen Points” for creating a new postwar and postimperial world order.

And so, when General Allenby chose to simply walk — in clear contradistinction to what the Kaiser had done 19 years before — through Jerusalem’s Jaffa Gate on Dec. 11, 1917, he did so carrying the hopes and dreams of both Jews and Arabs, who yearned to belong to their own modern nation-state.

In the 100 years that have followed, years of triumph as well as duplicity, war, terror, and chronic unrest, the nationalist dream has been realized by many, though not by all, of the region’s inhabitants.

The forced departure of the Ottomans and the arrival of the British did indeed reconfigure the Middle East by unleashing a dynamic process whose peaceful resolution — as we have been reminded of yet again last week — remains stubbornly elusive in our own time.

As Prince Feisal wrote to Felix Frankfurter, a contemporary American Zionist, a member of the U.S. delegation at the Paris Peace Conference in 1919, and a future Supreme Court justice: “We are working together for a reformed and revived Middle East, and our two movements complete one another …. Indeed, I think that neither can be a real success without the other.”

In December of 1917, Allenby — and the British more generally — thought that in defeating the Ottoman Empire a new era of state-building might be inaugurated in the Middle East. After the First World War ended the peacemakers who would gather at Paris in 1919 worked from this same assumption, as did those at the San Remo Conference of 1920 where the Mandate System was put in place. European and American policymakers were confident that the Paris-inspired statist, pluralist, and nationalist prescriptions for post-war state-building would take hold in Palestine, Arabia, Iraq and elsewhere in the Middle East.

Their (over-)confidence in this regard, however, would not be repaid with long-range success in most of the territories over which the Ottomans had ruled for the previous four centuries. In Palestine especially, the hoped-for construction of a modern pluralist state in which Arab and Jew (and Christian) might live together in harmony would founder in the 1920s and beyond. For Allenby himself, the British plan for Palestine was always ambitious and would remain difficult to implement. Much criticism has been made of the British — as well as the French — for what many have regarded as a plan for the Middle East that amounted to little more than Great Power manipulation. While both London and Paris had local imperial interests that they wished to protect, the attempt to implement the national principle in the Middle East was genuine, though flawed. Allenby himself believed it to be the right way forward because it would begin the process of regional political modernization in the war’s aftermath. In maintaining an essentially sanguine stance about Palestine’s future, he would be joined by many others, including Feisal. Alas, their hope has not (yet) been realized.

Brad Faught, FRHistS is Professor and Chair, Department of History & Global Studies, Tyndale University, and Senior Fellow, Massey College, University of Toronto. His works include Kitchener: Hero and Anti-Hero (2016) and Cairo 1921: Ten Days that Made the Middle East is forthcoming