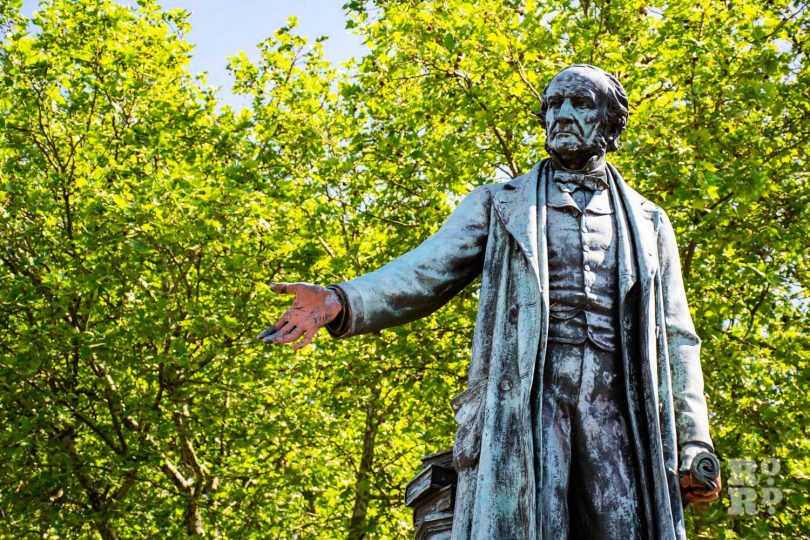 William Ewart Gladstone has been added to the hit list, and Liverpool University predictably rushed to deprive him of the obscure honour of a hall of residence named after him. If ‘the People’s William’ is looking down from an Evangelical Heaven, he must regard such a minor humiliation as a just chastisement for his sins, of which he was obsessively aware. But should we be happy about this sudden wave of historical scapegoating?

The reason given is that Gladstone came from a wealthy slave-owning family, eventually benefited financially himself, and in his maiden speech in the Commons in 1833 defended his father from charges of mistreating slaves on his plantation.  There is worse, seemingly not yet noticed by the ‘Topple the Racists’ organizers: during the American Civil War, he for a time supported the slave-owning Confederacy.

Whether this wipes out the reasons why he has long been honoured (and was loathed by the Right) is, I suppose, a matter of moral judgment.  On the virtuous side of the scale is his creation of modern progressive politics; urging democracy as a moral right; attempting to give Ireland home rule; creating a modern civil service; supporting sexually abused women; advocating Italian freedom; opposing arms spending; campaigning against ethnic atrocities in the Balkans; criticising imperialism and arguing for an ethical foreign policy, and so on.  His political record is unsurpassed—60 years in politics, and prime minister still in his eighties.  He was arguably the most wide-ranging, intelligent, unpredictable, dynamic (and psychologically odd) of our great modern politicians, a progressive hero across the globe, loathed by reactionaries, and worshipped by his huge working-class following.

Personally, I am not an unalloyed admirer of his rather sanctimonious style of politics, allied with a shameless opportunism (playing with an ace up his sleeve and claiming that God had put it there, commented a colleague).  But it is an odd spectacle to see some on the modern Left destroying their own heritage.  It is a distortion of history: Gladstone was not a slave trader, or owner, or defender of slavery.  The past is different from the present: the educative purpose of looking at history, however superficially, is to try to understand that difference, and in this case to understand why the eminently moral Gladstone took the positions he did.  He thought that the legal and peaceful abolition of slavery was to the general good.  In the American Civil War, he accepted Lincoln’s statement that the war was not about slavery.  He believed that it was dragging on endlessly, causing huge suffering, not least economic suffering to the workers of Northern England, many of whom supported his desire for a negotiated peace.  These may have been wrong opinions, as Gladstone later acknowledged.  But they were understandable, and hardly wicked.

I am not one of those who regard all historical monuments as sacrosanct.  No one has the right to a statue or even a hall of residence in their honour, and certainly not in perpetuity.  We can surely choose to remove the statues or other honorifics of people we no longer respect, or have merely forgotten.  I rejoiced when the many statues of Stalin and Lenin in the old USSR were pulled down: I’d be pretty worried if they were put back.

But my main reason for feeling uneasy about this present campaign is less historical than political and ethical.  If we crudely apply the most ‘woke’ criteria to figures in the past, few will emerge untarnished, and the campaign itself will soon become ridiculous: on the hit list already are Captain Cook and for no obvious reason Robert Peel (another popular hero, for reducing the cost of food).  More seriously, to attack a figure like Gladstone, or vandalize the statue of Churchill, due to distorted historical understanding or just for the hell of it, is a deliberate rejection of our shared history, not just the bad but also the good.  It is a clumsy attempt to start a nihilistic culture war and offend as many people as possible.  Is that the real aim?