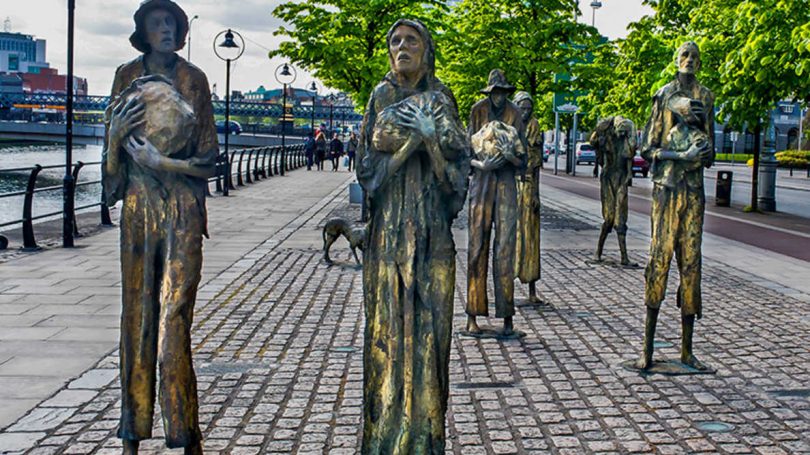 Writing as a historian of Ireland I take a particular interest in the Canadian Historical Association’s recent embrace of the term ‘genocide’ to describe the experience of indigenous peoples at the hands of white European settlers.

The CHA statement was boldly headed: ‘The History of Violence against Indigenous Peoples fully warrants the Use of the Word “Genocide”.  It was issued on Canada Day, 1 July 2021, presumably to underline the momentous significance of the claim.

We have had our own ‘genocide moment’ in the writing of Irish history. The mid-1990s marked the sesquicentenary of the Great Irish Famine of the 1840s. This was the most horrific episode in modern Irish history in terms of deaths and destitution. One million dead, one million fled, as the saying goes. Tens of thousands found their way to Canada, via Grosse Ile. Whether those who survived, and indeed other economic migrants to Canada, might be categorised as settler colonialists, I do not know.

The sesquicentenary gave rise to passionate debates round British culpability for the catastrophe. Some teachers, journalists, writers, ideologues and political activists reiterated the traditional nationalist narrative of the deliberate destruction of a people by starvation, famine-related disease and neglect. Murals on gable-end walls in IRA-dominated housing estates in Belfast projected the message of genocide. Politically-charged readings of the Famine were, if anything, more pronounced in sections of Irish America. In some states in the USA the Irish Famine was placed in school curricula alongside the Jewish Holocaust as historical episodes fit for comparison.

The United Nations’ convention on genocide, as adopted in 1948, was invoked. The prize, for political activists at least, was securing the label of genocide for the Irish experience. In the end, the virtually unanimous view of academic historians, based in Ireland, Britain and North America, was that the Irish Famine did not qualify as a case of genocide.

Evidence-based explorations proved unhelpful to those promoting the genocidal interpretation. It was impossible to reconcile facts such as the employment of three-quarters of a million people on public works’ schemes, or the feeding of three million at soup kitchens in the early summer of 1847, with notions of genocide. Then there was the small matter that the British government spent £9-10 millions (in the region of one billion pounds sterling in today’s value) on famine relief. Of course the state should have spent more, but that’s a longer story. Crucially, in terms of Article 2 of the UN convention, no evidence of genocidal intention came to light. In short, waving the genocide flag directed the public down a cul-de-sac. I fear the Canadian initiative may produce an equally sterile historiographical turn. It may also serve to devalue the horrific experiences of those who suffered what was unambiguously genocidal terror as under the regimes of Hitler, Pol Pot and in more recent times the victims of the Rwandan civil war.

There are dangers also in sacralising the provisions of the UN Convention on the Prevention and Punishment of the Crime of Genocide. At its core is Article 2 which, unfortunately, is rather woolly. There is no guidance as to how many people might be killed, or what fraction of an ethnic or racial group might be slaughtered before a verdict of genocide should be pronounced. Small groups of jihadists in France, for instance, have been responsible for a series of killings and maimings in recent years. Their professed intention was to wipe out infidels and other non-Muslims. Nonetheless, we would hardly count these actions as amounting to genocide. Similarly, the charge of causing serious bodily harm or mental injuries to members of a group, even if intention can be demonstrated, is similarly fraught with imprecision. At best, the Convention offers some useful signposts but its provisions can hardly be applied mechanically.

Some but not all historians and social scientists would have reservations about how meaningful it is to project concepts developed in a recent period backwards in time to earlier phases of human history. This is debatable but some at least would see this as anachronistic. Ironically, the council of the CHA seems to believe that debate itself on the question of genocide is now anachronistic. It is time to accept the charge.

What of the evidence for genocide in the Canadian case? Extensive research, it is claimed, makes it ‘abundantly clear’ that genocidal intent has been amply established in the historical scholarship. The revealing moment in the statement, the touch of hesitancy, is in the use of the adverb ‘abundantly’. It is either clear or it is not.

It is even more abundantly clear, to coin a phrase, that the CHA council is at variance with the thinking of at least some Canadian historians who regard the issue as far from settled. Its tetchy response to the letter of dismay from more than 50 leading historians and political scientists is unworthy of a major scholarly body (https://cha-shc.ca/news/recognizing-genocide-in-canada-2021-08-20). It would seem the ‘consensus’ discovered by the CHA council, not to mention the abundance of clarity on the matter, cannot be tarnished or disturbed by the arguments of a collection of mainly ‘white’, ‘retired’, and mainly non-specialist academics.

A new orthodoxy has been proclaimed, privileged by racial distinction, age and exclusion from the genocide debate. The term ‘debate’ is redundant of course as we are now in the enlightened realm of dogma. One might have thought of universities as bastions of disinterested enquiry and freedom of speech. Hallmarks of the historian include confronting complex historical experiences with intellectual integrity and attention to context, evidence, and the values of the time. Holistic accounts are normally preferred to selective and partisan renderings of the past that can be dished up so easily in the service of contemporary political positions.

Perhaps a wider debate is what is called for. As an outsider, though I should say some of my happiest teaching days were spent at the University of Toronto, I would like to see notions such as ‘First Nations’ interrogated in dispassionate fashion, in view of the millennia of a distinctive human presence in North America. Who were the first peoples, did one formation tend to displace another as in other parts of the world, did they practice warfare and torture, did some keep slaves?  That is, before Europeans entered the northern Arcadia.

Most historians on this side of the Atlantic are sceptical of practices that celebrate uncritically national or other group narratives, as typically deployed by partisan interest groups. The alternative, though, is not a descent into national self-denigration and collective self-abasement, as the CHA council seems to be doing. The watchwords once revered in the academy are open debate and critical enquiry, not the laying down of dogma.

I do of course accept that the indigenous peoples of North America – a term that might also be subjected to some critical scrutiny – suffered terribly from unequal contact with white Europeans. Some of the malign consequences are still with us. To give one example, the death rate of indigenous peoples from drug overdoses in British Columbia last year ran at five times that of whites (The Economist, 24 July 2021). But might there not be a danger in the CHA directive of infantilising these ‘others’, of robbing them of agency by promoting an image of the past that is one of unrelieved victimhood, culminating in genocide? The words of the great Irish and British historian, ATQ Stewart come to mind: ‘history is not a branch of social welfare’.

My own view is somewhat less austere. It is that social activism on the part of historians and social scientists is both laudable and desirable. But clear boundaries need to be drawn between the role of politically-engaged citizen and professional academic. At the very least, some appreciation of the possible dangers is desirable. Social anthropologists speak of the value of reflexivity, of looking inwards and outwards to understand how and why we come to be doing the research we do. We might at least agree on that.

To return to the opening theme, the CHA directive is worse than any of the ideologically-loaded pronouncements that shaped the Irish Famine debates. None of the antagonists in those controversies sought to close down discussion. There was no burning of books. But the CHA council insists, as an article of faith enjoined on all in the historical profession, and beyond, that the fate of the indigenous peoples of Canada was one of genocide. Many, possibly most historians of ‘indigenous’ origins take that view. But do they want to go a stage further and endorse the genocide thesis as a test of faith or virtual entry requirement to the profession?

Might this be a variant of what used to be known as the white man’s burden, albeit turned upside down? Roll over Rudyard Kipling, there’s a new civilising mission in town. The largely-white council of the CHA is zealously proselytising the wider Canadian society with its gospel of evil European invaders bent on exterminating indigenous peoples. The picture is one of dastardly motives and unrelieved gloom. Like an old-fashioned Hollywood western, this is black-and-white history with the hat colours reversed.

Why, we might wonder, did the executive take on a project or mission that discourages intellectual curiosity, that simplifies complex issues, and that violates some of the deepest values of academic scholarship? Group thinking and guilt seem to be in the air. We are informed that ‘we are all embedded in the structures of Indigenous dispossession in what is now known as Canada.’ Maybe, but guilt feelings may have more than one source. White privilege, if such it be, also runs along lines of social class and other closely correlated inequalities. Could it be that the evangelists of the genocide thesis have a need, consciously or unconsciously, to set aside other strains of concern regarding their own privileged position within the deeply unequal structures of North American society?

There is a strand of the psychological literature on human behaviour that might, or might not, offer a little illumination. It is presented here in a spirit of friendly comradeship; it is a hypothesis, let us say. An article entitled ‘A Cleansing Fire’ was published in the journal Motivation and Emotion in 2017. The joint authors, Zachary Rothschild and Lucas Keefer, argued that expressions of moral outrage are ‘sometimes a means of reducing guilt over one’s own moral failings and restoring a moral identity.’ There is certainly no shortage of moral outrage in the directive issued by the council of the Canadian Historical Association.

Latest book: Who Was Responsible for the Troubles? The Northern Ireland Conflict (Montreal: McGill-Queen’s UP, 2020).