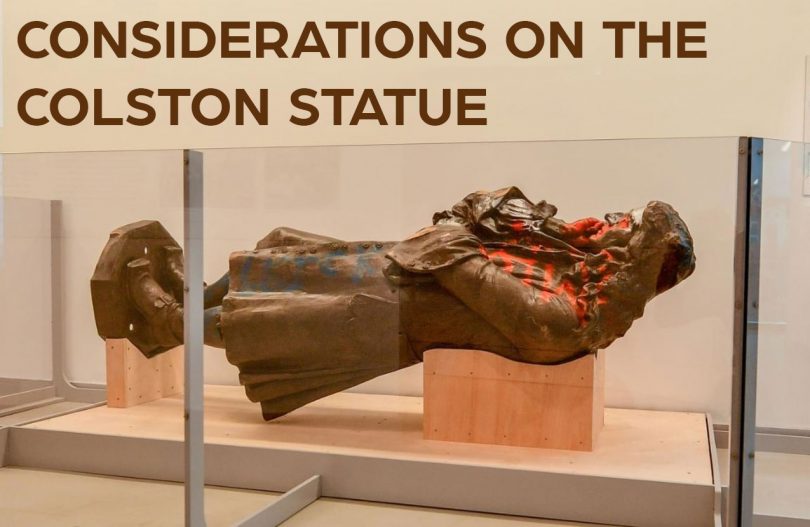 Two members of the History Reclaimed group offer their thoughts.

Last week a jury acquitted of criminal damage the four people charged with pulling down the statue of the seventeenth-century Bristol slave trader, Edward Colston. The defendants did not deny that they had pulled it down. Rather, they and the historian David Olusoga, who was called as a witness, pointed to the evils of the slave trade, and one of the defendants described the statue itself as a ‘hate crime’. Since the criminal damage legislation does not include moral or political objections to an object as a lawful reason for damaging it, the jury’s verdict raises some deep questions about the rule of law. The case also raises a different sort of question. Was there in any case good reason to object to the display of Colston’s statue – whether by pulling it down, or simply by seeking its removal or complaining about its presence?

Many – even among those who were shocked at the violent removal of the statue, and are disturbed by the jury’s verdict – would argue that the statue of such a person should not be on public display, because the transatlantic slave trade was a great evil and Colston was very deeply involved in it. Neither of these contentions can be denied. With regard to Colston’s involvement, he was a for 12 years a member, and for three years Deputy Governor, of the Royal African Company, which held the monopoly in England for trading, among other things, slaves from the West coast of Africa. As to the evils of the slave trade, it is, indeed, arguable that we are guilty of anachronism if we condemn anyone in the past who owned slaves or profited from slavery. Slavery was widespread and generally accepted in many civilizations until the nineteenth century or later, and in some times and places, such as the Roman world, the relationship between slave and master was often less oppressive than many other economic relationships. But the transatlantic slave trade was exceptional in its cruelty. Since at the same time as British slave owners profited from their plantations in the Caribbean slavery was illegal in their own country, it seems that the transatlantic slave trade can be called evil without anachronism.

How then can we defend honouring someone who, despite his philanthropy, was so thoroughly involved in evil? Of course, we cannot – but it is completely wrong to think that the existence and display of his statue is a way of honouring him. At the moment when statues are erected, the purpose is, indeed, usually to honour or celebrate the person sculpted. In rare cases, where the person remains celebrated and respected, this purpose endures. Usually – at least in Britain – it quickly disappears. The fate of most statues is to become familiar but ignored features of the urban landscape. Rarely do people know who these monuments depict or, if a plaque gives them a name, anything beyond it. Nor do they care.

Historians might worry about this widespread carelessness and ignorance, but they should not. The British attitude to statues is a way of living at ease with a long history. Public memorials are, paradoxically, less a way of remembering the past than of gently forgetting about it, by allowing its details to fade into a parade of grand but semi-anonymous figures.

‘But’, the statue-removers will say, ‘you should not be able to live at ease with your history. Do you think that Germans should live at ease with Hitler and the holocaust? The slave trade was also a holocaust.’ (One of the defendants did in fact compared having a statue of Colston to having one of Hitler.) The answer is that not only is the scale of the evil different, but there is vast disparity with regard to time. Hitler’s crimes were immediately recognized: it was unthinkable to any decent person that there should be any commemoration of the era except of its victims. Britain’s participation in the transatlantic slave trade ceased two centuries ago.

David Olusoga claimed that the four defendants were on ‘the right side of history’. But human history does not, as his remark implies, move from the worse to the better. Rather, it runs from disaster to disaster, cruelty to cruelty (read Augustine on the City of God if you doubt this). Opponents of the statue-removers are inclined to say that our history is under attack, and we should be allowed to keep it. Their fear is misplaced: our history has happened and we cannot but keep it. What is under attack are, rather, our ways of living, peacefully and even constructively, with our history. And they are among our most precious cultural assets.

John Marenbon is a Cambridge philosopher. His The Battle for Britain’s Cultural Identity – Against the New Normal is published by Politeia, and featured elsewhere on our site.

And a bonus on a more positive note: a dear friend, who happens to be a lifelong Labour Party supporter, wrote me this a couple of hours ago: ‘I agree with you about the futility and sadness of destroying the emblems of bygone years. There are numerous generals and dukes whose monuments seem unjustified today, but that isn’t their point. I wish we were as energetic in dealing with modern slavery as statues of men associated with oppression hundreds of years ago’. Wise words, don’t you think?

Mark Stocker is former Curator, Historical International Art, at the Museum of New Zealand Te Papa Tongarewa.  He has taught at the universities of Canterbury and Otago.