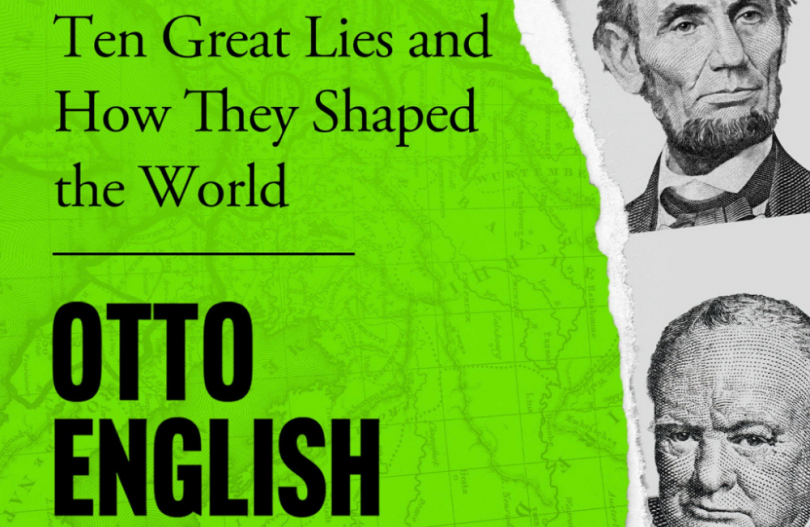 Otto English attacks what he regards as politically motivate fables about Winston Churchill. English styles himself as a dispassionate revisionist, overturning the taboo on criticizing Churchill. Of the “thousands” of biographies written by other authors, English contemptuously writes that many of them will be full of either things that “Churchill never said… or never did”. How lucky we are that English is here to dispel the myths!

Fake History includes a bit of fake historiography. For example, I have not once encountered an author portray Churchill as having come from anything other than a privileged background. That isn’t to say that Churchill never faced difficulties though. As a young boy he was physically abused by the headmaster of his school. For some reason English doesn’t mention that when discussing Churchill’s childhood. English goes on a lengthy diatribe against quotations attributed to Churchill apparently ignorant of authors like Richard Langworth who regularly debunks false Churchill quotes. English accuses earlier biographers of downplaying the importance of Churchill’s wife, but doesn’t give any examples. I am unaware of a single historian who regards Winston and Clementine Churchill as on a reputational seesaw.

English characterizes Churchill as a consistent supporter of wanton imperial violence. He can only sustain this claim by ignoring anything that contradicts it. Thus, English mentions that Churchill was involved in the one-sided British victory at Omdurman, but neglects to mention that Churchill criticized the British treatment of enemy wounded. He mentions that Churchill said that the colonization of Australia and America was not in itself a “wrong” but ignores that Churchill opposed imperial atrocities such as the brutal suppression of the Bambatha Rebellion, or punitive expeditions in Nigeria, or the Amritsar massacre.  Incidentally Churchill wasn’t “defending the suppression of Aborigines” when he made that infamous remark – he was refuting an argument against Jewish emigration to Palestine. Had Churchill been listened to, more Jewish people would have survived the Holocaust. It is also fanciful to suggest that a majority of white Americans or Australians in the 1930s would have disagreed with Churchill’s view.

Omissions aside, English also makes numerous factual errors. Each one in itself may be minor, but as they are so many that they collectively undermine the value of English’s book. For example, Churchill was observer of the Cuban insurrection, but he did not fight for the Spanish. As Churchill put it “I have not even fired my revolver. I am a member of General Valdez’s staff by courtesy only, and am decorated with the Red Cross only by courtesy”.

I could go on, so I will. Churchill did not “reinvent” himself as a journalist for the Second Boer War – he had previously covered the Cuban insurrection for the Daily Graphic, been commissioned as war correspondent for the Daily Telegraph, and covered the reconquest of Sudan for the Morning Post. Churchill was not “alone” in his opposition to Indian independence in the 1930s – the Government of India Act of 1935 was intended by the government to secure British rule of India, not pave the way for independence. Obama did not remove Churchill’s bust because his grandfather was tortured while Churchill was PM – it is doubtful that his grandfather was ever imprisoned by the British and in any case, he was allegedly arrested while Attlee was PM. Artillery did not shell the East End of London during the siege of Sidney Street.

Amusingly, even when English is trying to be evenhanded, he gets his facts wrong. For example, he credits Churchill for cancelling the dispatch of troops to Tonypandy, ignoring the fact that Churchill reversed his position within a day because of widespread rioting in the town. The soldiers didn’t kill anyone but their presence brought the rioting a close immediately.

According to English, anything Churchill did was mainly for the purposes of self-promotion. When Churchill achieved anything good, it apparently can be attributed to the influence of his wife. English gives as an example of this the social reforms Churchill introduced while at the Board of Trade. However, Churchill stated his support of social reform as early as 1899, five years before he even met Clementine. While campaigning in his first ever election, Churchill said:

English’s characterization of Churchill’s time on the Western Front is especially egregious. According to English, Churchill was miles away from the “real war” and was never in any real danger. English also suggests that Churchill proved inept as an officer. But Martin Gilbert – whose books English claims to have read – described numerous instances of Churchill surviving German artillery or machine gun fire, and of leading soldiers into No Man’s Land. The soldiers who served with Churchill didn’t think he was a bad commander. To quote Captain Jock McDavid:

“After a very brief period he had accelerated the morale of the officers and men to an almost unbelievable degree. It was sheer personality …. No detail of our daily life was too small for [Churchill] to ignore. He overlooked nothing…. I have never known an officer take such pains to inspire confidence or to gain confidence; indeed he inspired confidence in gaining it”

In summary, English has not produced a work of history. I cannot comment on the other chapters of his book, but the chapter on Churchill doesn’t inspire confidence. It is an inaccurate and mean-spirited political polemic. Readers who want to read a decent work on Churchill’s life and career would be advised to pick up biographies by Martin Gilbert, Andrew Roberts, Richard Langworth… in fact, by just about anyone other than Otto English.

Herbert Anderson writes about Churchill misconceptions that he sees online and in the media. He blogs at https://churchill-myths.blogspot.com