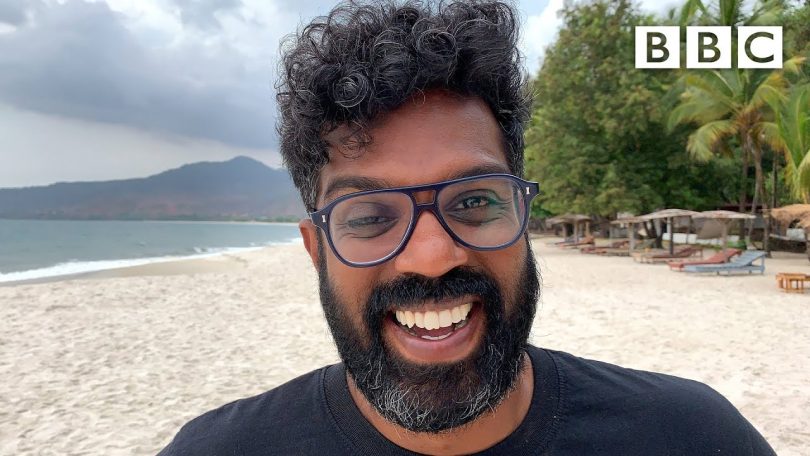 “Some people are now claiming that the BBC has lost it impartiality and is keen to interpret history in an anti-British way. So far, they are proved right.” Mr Chris Tett wrote to the BBC complaining about ‘The Misadventures of Romesh Ranganathan’ transmitted on BBC2 on Sunday 13th March 2022 at 21:00. We publish here their correspondence, so that readers can form their own opinion.

The programme was about Sierra Leone and after 15 minutes Ramesh visits Bunce Island close to Freetown in the estuary of the Sierra Leone River.

This is the original complaint submitted on 15th March 2022:

Romesh Ranganathan visited Freetown and a fort on Bunce Island where slaves were held until being shipped to the Americas. This nasty fact should not be avoided but history was then distorted by the choice of facts covered. Statements made:

In Freetown, slaves freed by the Royal Navy walked through the ‘Freedom Arch’ to the Old King’s Yard to be given treatment and food. Declared a National Monument in 1949, it is a UNESCO World Heritage site. Its website says:

The Gateway to the Old King’s Yard compares with the Statue of Liberty in the United States in enduring as a highly potent symbol, inspiring contemplation of ideals such as freedom, human rights, democracy and opportunity…

Surely such a monument was worth showing. But no mention.

Ranganathan said that slave trading was something ‘..the white British did..’ A racist statement ignoring African involvement. British involvement in the slave trade was shameful but could not have taken place without active involvement of Africans.

The programme covered the history of Freetown without mentioning who set it up or efforts by Britain to end the slave trade. African involvement in the trade was not mentioned at all. A defamation of Britain by a biased selection of facts.

Thanks for getting in touch about The Misadventures of Romesh Ranganathan.

I note your concerns with information in the programme.

Thanks for watching the programme and sharing your thoughts with us. I checked the examples you provided. The 138-year period was an overview. However, a single programme or report wouldn’t always be able to break down extensive historical information as much as we’d like due to time constraints. This is the same for other areas you highlighted in not including such as the ‘raiders’, the number following the abolition as well as the local chiefs point. There is always a lot more to include and we appreciate that not everyone will agree on what’s discussed. With regards to ‘white British’, this was looking at Britain’s involvement on a British series with a British presenter. That was the main focus; it wasn’t to suggest no other parties existed too.

Looking at the remit of the programme, Romesh found it impossible to think of anything other than Sierra Leone’s dark history – a horrific civil war, child soldiers, blood diamonds and Ebola, as was noted in the programme. He explored the country following the green light to travel there for the first time since the start of the pandemic, and sought to find out whether Brits could and should plan their next holiday there.

Rom was picked up by Gwyn Jay Allen, a local musician who agreed to spend a week showing him around and opening his eyes to incredible places, either unknown or forgotten. They ventured through spectacular national parks, hoping to witness extraordinary and rare wildlife such as the elusive pygmy hippo, sampled the national drink poyo, took in miles and miles of the most incredible beaches and met locals living truly off-grid. They also settled down at a once-in-a-lifetime camping spot on a remote archipelago.

Then Rom delved into its complex and brutal past, which has lasting effects today. Visiting Bunce Island’s slave fort, the capital Freetown, a diamond mine and the incredible athletes that make up the Flying Stars amputee football club, he learned about the trauma endured by Sierra Leonians – their unbelievable resilience and astonishing hope for the future, of which tourism forms a key part.

So there was clearly a lot to cover on the programme and it wasn’t solely focused on slavery. Yet, we do appreciate the examples you’ve provided in how you felt it could’ve been improved, and your comments are most welcome.

All complaints are sent to senior management, and we’ve included your points in our overnight report. These reports are among the most widely read sources of feedback in the company and ensures that your concerns have been seen by the right people quickly. This helps inform their decisions about current and future content.

Thanks again for getting in touch.

Your reviewer, Phil Young, ignored or completely missed the point of my complaint.

There are three aspects to slavery in Sierra Leone. British holding slaves before selling wholesale to shippers, Africans who captured free people and brought them to the British for sale and British efforts to shut down the trade and right the wrong.

You reply states other points could not be included due to ‘..time constraints’. There is little difference in airtime between the statement made: ‘Freetown was set up for freed slave’ and an alternative ‘Britain set up Freetown for freed slaves’?  Again, what is the different between the statement made ‘Feed slaves were brought to Freetown’ and an alternative ‘British Navy ships brought slaves they had freed to Freetown’?

Your reply stated that the programme asked ‘….whether Brits could and should plan their next holiday there.’  Well, if so, a reference to a UNESCO World Heritage site would surely be attractive to visitors.

There is a modern woke version of history which only mentions the transatlantic slave trade and leaves out both African involvement and especially that it was Britain that stopped the awful trade against huge opposition from other countries including black nations. This is one instance, and we should recognise it for what it is.

The omissions and focus on one aspect show the programme intended both a lack of balance and racism.

Thank you for contacting us again about this programme. We note you continue to have concerns.

You suggest that the programme stated that slavery was ‘something the white British did’. This is incorrect. In the programme viewers hear Romesh say:

“It would be very easy for me to say, ‘Well, this is what white British people did, my parents come from Sri Lanka, so this is nothing to do with me.’ But the truth of it is, is that my parents wanted a better life for their children. And the reason that they moved over to the UK is because of the economic, the infrastructure, all of these things, the, the standard of living that is built upon benefits that were gleaned from slavery….  You know, you can’t just go, ‘this is nothing to do with me’. It is part of British history, it’s part of black British history, and it should be acknowledged as such.”It is clear that these are Romesh’s views on the complex legacy of slavery and not a simple statement of fact regarding responsibility for the slave trade.

We note there are a number of other facts about slavery that you feel should have been included. As previously stated, this is a travel programme about the country of Sierra Leone and not an in-depth look at the slave trade. The issues you raise are complex and time constraints do not allow for every issue to be explored in the depth that some viewers might like, nor was this the aim of this programme.

Thanks again for taking the time to contact us, we have shared your feedback with the programme makers.  Should you wish to pursue your complaint further there are details below on how you can do this.

This concludes Stage 1 of our complaints process. That means we can’t correspond with you further here. If you remain unhappy, you can now contact the BBC’s Executive Complaints Unit (ECU). The ECU is Stage 2 of the BBC’s complaints process. You’ll need to explain why you think there’s a potential breach of standards, or if the issue is significant and should still be investigated. Please do so within 20 working days of this reply.

Full details of how we handle complaints are available at http://www.bbc.co.uk/complaints/handle-complaint/.

We’ve provided a unique link for you in this email. This will open up further information about how to submit your complaint. You’ll be asked for the case reference number we’ve provided in this reply. Once you’ve used the link and submitted your complaint, the link will no longer work.

I am glad the second reviewer admits what was said. Quoting the full context does not alter the sentiment which was that slavery was  “…. something the white British did. …..”  adding “It is part of British history…”  Romesh added “…. the standard of living that is built upon benefits that were gleaned from slavery” which is much disputed by some very eminent economic historians. Your reviewer then adds   “…. these are Romesh’s views on the complex legacy of slavery.”

Your reviewer also stated this was a travel programme. Well, it took time to delve into history in a way to discredit Britain. The programme sets out clearly racist views because the whole programme section blames the white British for the slave trade and mentions only items which discredit British history.

There is much for Britain to be proud of in Freetown, including the UNESCO World Heritage site. Many more rescued slaves were taken to Freetown than ever were shipped as slaves from Bunce Island. Clearly a lack of balance was shown.

In a programme about Sierra Leone and Freetown that talks about history it would have been easy to mention that Freetown was set up by the British to take slaves freed by the Royal Navy where they would be safe because black Africans continued to enslave and sell other Africans. It did not.  This clearly shows the programme makers wish to avoid mentioning anything good about Britain.

Let us be clear. A travel programme does not need to mention history but if it does, it needs to be balanced. This was not. Further, this programme was racially biased because it blamed only the British but did not mention black African involvement.

Some people are now claiming that the BBC has lost it impartiality and is keen to interpret history in an anti-British way. So far, they are proved right.