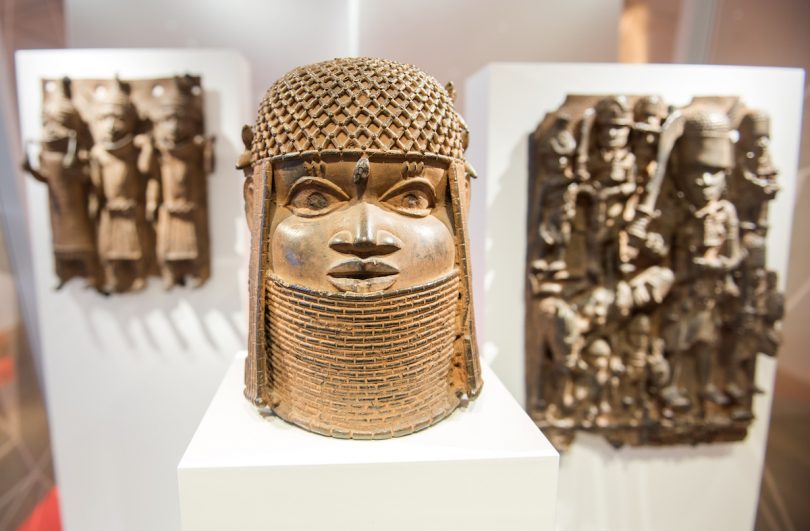 The demand by TV historian David Olusoga, speaking at the Hay Festival, for British museums to repatriate “looted” treasures is a familiar anti-colonial trope that has little historical basis and would be impossible to implement in practice.

Olusoga’s prime example, the Benin bronzes of West Africa, illustrate the complexity of determining ownership of art produced hundreds and often thousands of years ago.  The bronzes were acquired as war booty by a British military expedition in 1897 and are now spread across dozens of different museums and private collections around the world, including two of the largest collections in Nigerian museums.

War booty or licensed plunder by armies was considered normal practice in warfare across the world till the 20th century.  It accounts for a large proportion of art treasures in museums everywhere, including those in pre-colonial empires like China and India, who plundered conquered peoples every bit as rapaciously as any Western colonialists.  Even if today we think of such plunder as theft, its return would be near impossible, not least because of the difficulty of determining to which new, indigenous nations they now belong, especially where the populations that produced them have died out or moved on.  Very different from returning objects to individuals with proof of ownership, as with much Nazi plunder during World War 2.

Great art has also travelled the world in peaceful trade since ancient times, and separating that from wartime plunder is often well-nigh impossible.  Who owns a Greek sculpture that turns up in a Beijing excavation or a rare Chinese vase found in North Africa?  Most problematic of all would be the fate of Asian or African art treasures discovered, excavated and conserved by Western explorers, the much maligned Orientalists, Arabists and Africanists whom Edward Said so unjustly caricatured.  It was their dedication, often at huge personal sacrifice, that unlocked the wonders of many lost classical civilisations.

Take the Indian example.  Before the British arrived, there was no indigenous tradition of exploring or conserving antiquity.  The wonderful Buddhist stupas of the Mauryan empire (circa 2nd century BC) were destroyed, abandoned and forgotten during the Hindu revival of medieval times, and then many Hindu temples met a similar fate during Muslim invasions from the 12th century onwards.  18th century British visitors were surprised to find even recent Mughal monuments like the Taj Mahal neglected and languishing.  The Indian approach, still true today, is to embrace the new and discard the old.  If it’s broke, don’t fix it.  Chuck it and get something new.

The rediscovery of a classical past and the romantic appeal of its ruined remnants was a peculiarly European sensibility.  And so it was intrepid British explorers who discovered and rescued some of India’s most iconic antiquities.  The so-called Elliot Marbles in the British Museum are a case in point. They come from a 2,000-year-old stupa in south India, intricately carved with scenes from the life of the Buddha.  It was a Scottish revenue official, Sir Walter Elliot, who excavated the site in the 1840s, rescued it from being pillaged by locals, and carted off some of the finest sculptures to the Madras Museum, whence some later found their way to the British Museum.

Today they are housed in a special, climate-controlled gallery in the BM, as part of a Japanese-financed centre for the study of global Buddhism.  Back in India, the stupa itself is sadly neglected, while the Madras Museum’s collection of its sculptures is one of its least visited rooms.  That hasn’t stopped the Indian authorities from demanding the return of the BM’s collection, a request that’s been politely declined.  It’s hard to imagine that they would really be better appreciated or conserved in the land of their birth.

The fact is that we have no idea what would have become of the world’s “looted” antiquities if they hadn’t been preserved in Western collections.  Would the treasures of Beijing’s Summer palace have survived Mao’s Cultural Revolution?  Would the Elgin marbles have survived Turkish tour guides chopping off chunks to sell as souvenirs?  Would Isis and the Taliban have spared the Middle Eastern antiquities that survive in European museums? And if all foreign treasures are to be returned, should our great global museums be reduced to narrow, native collections?

What such repatriation demands ignore is the role of great collections like the British Museum and the Louvre in making our global art heritage accessible to us all in a world of growing mobility.  Would David Olusoga, the British-reared child of an Anglo-Nigerian marriage, have grown up enjoying Benin bronzes here in London if they were confined to a local museum in Benin City, Nigeria?