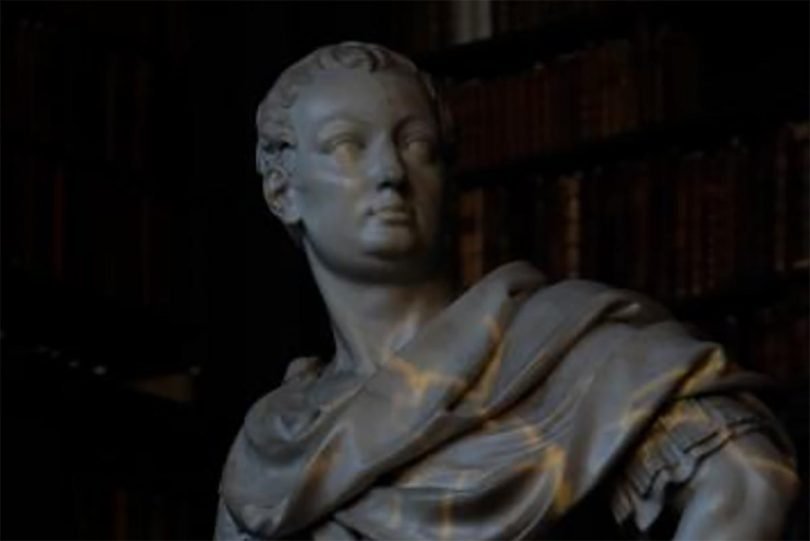 Earlier this month All Souls College, Oxford, unveiled its application of the government’s policy to “Retain and Explain” in respect of the monuments in the College connected with Christopher Codrington, who inherited slave plantations in the West Indies c1700. Robert Jackson, a former MP and Minister of Higher Education, and a former Fellow of All Souls, suggests that the displays at All Souls are a travesty of the policy of “Retain and Explain” and set a dangerous precedent for the application of that policy elsewhere.

The government’s policy with regard to “contested monuments” is to “Retain and Explain”.  The Secretary of State for Culture should take the time to visit All Souls College at Oxford have a look at that College’s way of applying this policy, and to consider the precedent it may set for similar travesties elsewhere.  She will find that what All Souls is offering is a case not so much of “Retain and Explain” as of “Vandalise and Vilify”.

In an earlier article on the “History Reclaimed” web-site, I set out the background to the controversy concerning “Codrington at All Souls and Barbados”, supplying evidence for the suggestion that Codrington’s great benefactions in those places in 1710 are best understood in terms of what I described as “The Awakening of the Anglican Conscience concerning Slavery”. For our times this is arguably the best “explanation” of Codrington’s monuments at All Souls, and perhaps the best justification of their “retention”. But this is evidently not the perspective preferred, or even entertained, by All Souls College.

The College decided last year to “cancel” the name by which the library has been known for three centuries, referring to the benefactor who paid for it. And now it has installed various digital displays in the library, the thrust of which is to denigrate his memory.

These displays are of two kinds. On the one hand, a projector has been installed to project imagery of cracks, damage, and graffiti onto the marble statue of Codrington in the library: this is intended to be permanent and is switched on at all times when the library is in use.  This is All Souls’ version of “Retaining”.  On the other hand, a set of displays on TV screens has been installed in the vestibule to the library, exhibiting material which is All Souls’ version of “Explaining”.

One of these TV screens provides straight-forward factual information without further explanation, concerning the College’s recent engagement with Codrington’s legacy. Another gives a factual account of the architectural history of the library, in the crabbed manner of Pevsnerian positivism and without  reference to its high artistic value and its historical significance as a noble monument of English aristocratic taste in its palmy days.

A third screen has been allocated to Codrington College at Barbados, allowing it to give an account of its contemporary mission and of its own view of its controversial origins and history. This is an impressive and moving document.  Codrington College is evidently a vibrant Christian institution continuing to do God’s work although with limited means (now aided by small hand-outs from its much more wealthy sister in Oxford). Its display at All Souls does not explicitly attempt to justify what seems to be its policy of retaining the name of its founder (note the contrast with All Souls’ cancellation of this name). But it does Codrington the justice of citing in full the limited documentary evidence we have of his personal intentions for his foundation.

It is important to take notice of this evidence. After coming into his inheritance in 1698 Codrington wrote to his friend William Popple concerning his inherited slaves: “their condition has cost me many a mortifying reflection, and yet I know not how I shall be able to mend it in any respect but feeding my slaves well. I shall certainly be opposed by all the planters in general if I should go about to secure their limbs and lives by a law, though I will certainly recommend something of the kind”. In his Will of 1703 he attempted more concrete measures: “the foundation of a college in Barbados for the study and practice of Physick and Chyrurgy, as well as divinity, that by the apparent usefulness of the former to all mankind, they may both endear themselves to the people and have better opportunities of doing good to men’s souls whilst they are taking care of their bodies”. 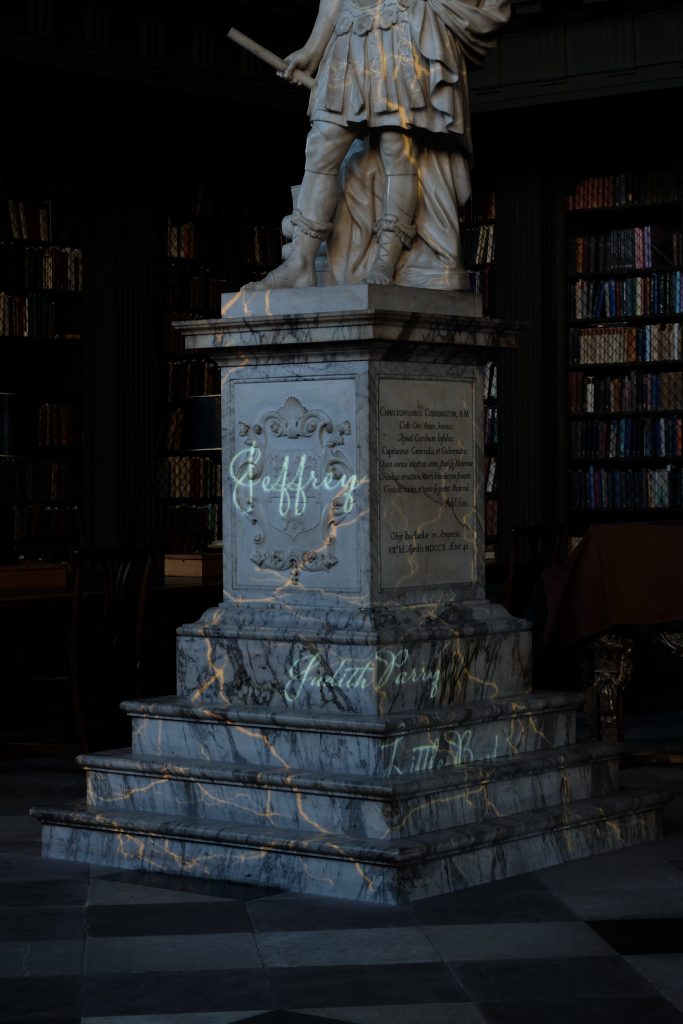 All Souls has allotted the fourth screen to an organisation titled “Museumand: The National Caribbean Heritage Museum”.  The status of this organisation is obscure, and its representations are anonymous. It is based in the UK and not in the Caribbean, and its claim to represent a “National Caribbean” history evidently begs many questions. Its display consists of a series of slides, each stating what it describes as a “Myth” concerning Codrington, counterbalanced in each case by what purports to be a statement of the “Reality”.  The most notable feature of these “Reality” statements is the absence of any evidence or references to evidence.  Consider “Reality # 1” which gives “Museumand’s” account of Codrington’s attitude to his slaves. “He treated people as social capital – the more enslaved workers you had, the higher your status”. “The enslaved saw Codrington as a cruel abuser who ruled by fear”. “Codrington’s methods for punishing the few who [ran away or rebelled] were atrocious and inhuman”. “The enslaved weren’t allowed to keep their names, speak their own languages, or carry out their own religious and cultural traditions and practices”.  This is a farrago of late 20th century sociologese (“social capital”); of unverifiable assertion (how his slaves “saw Codrington”); of claims that are unverified and improbable (“Codrington’s methods”); and of assertions which imply a profound lack of insight into the circumstances of slavery in the period, e.g. in respect of the planters’ opposition to Christian mission among the slaves, which Codrington’s foundation of his College at Barbados was manifestly intended to circumvent.

The character of “Museumand’s” displays, sponsored by All Souls College, is that of the anonymous denunciations and lynchings which were a prominent feature of the Chinese Cultural Revolution. They are unworthy of a British university. Any claim by All Souls that they are merely facilitating the presentation of one side in a civilised academic debate is wholly and entirely meretricious. This is an exercise not of “explanation” but of “vilification”.

The most interesting aspect of these displays is what they tell us not so much (though all too revealingly) about the state of contemporary university culture in Britain, but what they reveal about the perilous future of Britain’s former colonies in the Caribbean. These are islands in shark-infested seas: with increasing populations, limited and depleted economic resources, high exposure to climate change, to corrupt governance, and to intrusions by powerful drug barons, American commercial interests, and increasingly by the ambitions of the Chinese state.  Public opinion in the islands seems to be divided, between those seeking to preserve the stabilising force of their historical connexions with Britain, and those seeking to rupture those connexions. Much of the motive force behind the disruptors seems to come from outside the islands themselves, notably from academic and political fashions in the USA and the UK. In this cacophony any intervention by All Souls in these far away lands of which it knows nothing is no more than a bat’s squeak – but it is a bat’s squeak which is tuned in to and essentially supportive of the cause of the disruptors.

All Souls’ destructive attitude is evident not only in the displays in the vestibule of the [Codrington] library but also, and most vividly, in the light-show perpetually projected onto the statue of Codrington.

Because this statue is a protected Grade I listed monument in a Grade I listed building designed by one of Britain’s greatest architects, it has not been possible for the current Fellows of All Souls to effect its removal. They are obliged to accept that they must “Retain” the monument. So they have hit upon a cunning plan, perhaps even better than the banishment of the statue. Since they cannot Colstonise it by throwing it into a river, they have chosen to fall back on the next best thing: a “virtual” Colstonisation by which the statue remains in place while the Fellows allow their primitive instincts of hatred and destruction to wreak themselves virtually upon it by means of a permanent light-show.

While the TV displays in the library’s vestibule have the effect of vilifying Codrington, the light-show in the library has the virtual effect of vandalising his monument. On the model of Mao’s Cultural Revolution, on the one hand we have the denunciations, and on the other, the lynching.

When I was elected to an Examination Fellowship at All Souls in 1968, the publication of Anthony Powell’s “Dance to the Music of Time” series of novels dealing with aspects of Establishment life were drawing to a conclusion. The junior Fellows of that time practiced an amusing game of matching their seniors more or less plausibly with various figures in Powell’s novels.  I recall, however, that there was concern about the plausibility of the denouement accorded by Powell to the central figure of Widmerpool, the sharp-elbowed but accident-prone careerist who ends up abasing himself, licking the feet and chanting the mantras prescribed by a guru in one of the New Age cults of that period.  But Powell had a poet’s prescience: none of us could have imagined that All Souls itself would eventually accomplish its own Widmerpoolian descent into sinister farce.