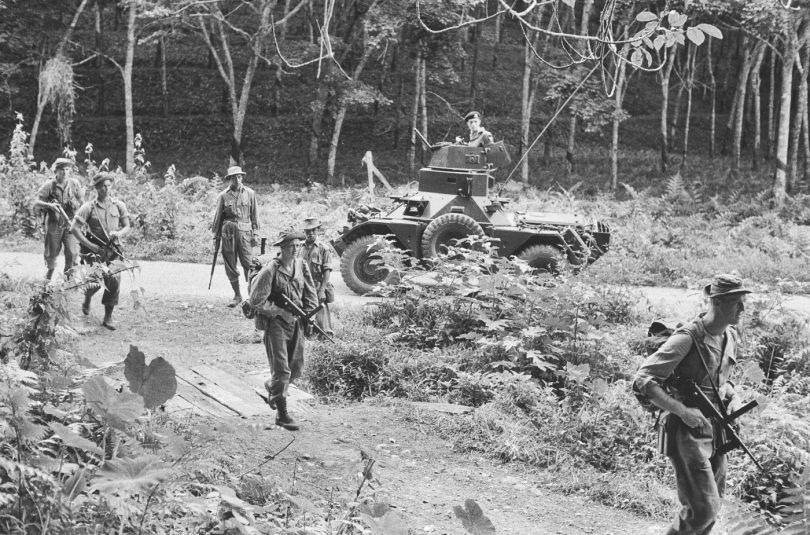 It seems to be a new anti-colonialist orthodoxy that the British counter-insurgency campaign in Malaya before independence was a shameful story of imperialist violence and repression. The truth is the very opposite, as the people of Malaya and Singapore are well aware.

Eight thousand civilians and police were killed by communist China’s attempt to seize power in today’s Malaysia and Singapore between 1948 and 1960. The armed struggle against British rule had begun under the tutelage of Moscow in 1930 and, after a brief lull during World War II, resumed under the close supervision of the soon-to-be communist government in Beijing in 1948.

But the so-called “Malayan Emergency” was more than just a local communist insurgency. Moscow and Beijing wanted the Communist Party of Malaya to be the spearhead of a push into Southeast Asia as well, moving first into Thailand and then into Indonesia.

The reason the insurgency failed is that ordinary Malays and Singaporeans (as well as Thais and Indonesians) had no desire to live under communist rule, especially given evidence of the turmoil and terror coming out of the communist movement in Vietnam. “We coerced the people too much,” said one political organiser, Liew Thian Choy, a view that was later confirmed by senior communist organizer Lam Swee in his 1951 pamphlet My Accusation that carried the subtitle Written Against the Blind Struggle of the Communist Party.,

Modern academics portray the Beijing-backed rebels in Malaya as heralds of a progressive vision that was tragically thwarted by a cruel and reactionary British response. If not for the unjustified colonial repression, they insist, the peoples of Southeast Asia would have prospered under the gentle rule of the Comintern. If only the British had treated the communists as a legitimate political party with aspirations to rule, the story goes, these places would be more democratic and more prosperous.

In her otiose Legacy of Violence, Harvard professor Caroline Elkins describes the communist insurgency as “anti-imperialist” and as “waging a war for national liberation”, a rather difficult claim to square with its external direction from Moscow and Beijing. The insurgency, Elkins rhapsodizes, sought “freedom and human dignity”, presumably of the sort known in Mao’s China, whose “New Democracy” it promised to replicate. The communists gained “traction” in Malay society because the British could offer only “social crises, homelessness, disease, and semistarvation.” The British response, she assays, was merely an attempt “to reassert colonial control in Malaya with its own form of liberal imperial harshness.” The 300,000 Malays, Chinese, and Indians who took part in the fight against communism were not thinking people but playthings of colonial manipulation. The British practice of “brutalizing individuals and communities”, not fears of communist terror, caused the insurgency to collapse.

In fact, the British were at first willing to entertain the communist movement as a legitimate political actor. Its trade union operated freely throughout the 1930s and its armed units were integrated into the British effort in World War II. After the war, its troops were given pensions, the party was allowed to contest elections, and its leader was awarded the Order of the British Empire. Once it declared war on the British colony in 1948, all that changed.

The problem for this “people’s movement” was not British repression but the small technicality that the people wanted nothing to do with it. The movement was 90% Chinese in a country whose population was only 38% Chinese. Even the Chinese population mostly opposed it. The insurgency spread terror by executing not only “traitors” who worked for the government but also “backward elements” who refused to go along with the communist program. Styling itself the voice of the peasant, its activities involved destroying peasant livelihoods by sabotage of tin and rubber plantations. In 1950, after villagers of Simpang Tiga in northwestern Perak state refused to comply with orders from the communists, a squad of goons burned the village to the ground. Among the “hundreds” of communist atrocities reported by police in 1952, the peak of the insurgency, was a Chinese farmer and his wife hacked to death with a machete and their eight-year old daughter thrown into the flames of their burning hut. Another young Chinese girl had a nail driven through her skull in Perak. At Kampar, a terrorist heaved a grenade into a crowd watching a circus, killing five people.

While the British were keen to negotiate a settlement with the communists, the local Malays, Indians, and Chinese in the colony wanted nothing to do with them. When the insurgents briefly came out of the jungle in 1955 claiming they wanted to talk peace, the Malay chief minister Tunku Abdul Rahman said No. “It was a big juicy red apple but Rahman was shrewd enough to realize that it was poisoned,” wrote the architect of the British counter-insurgency strategy, Sir Robert Thompson. The insincere communist approach to the peace deal signed in Vietnam a year earlier would prove him right.

The British response focused on sapping communist support through “New Villages” that would protect locals from communist terror and deny recruits and supplies to the insurgents. It worked well and became the basis of the “hearts and minds” approach to counter-insurgency. The 423 villages were strictly run according to published rules in order to avoid any perception of arbitrary administration or favoritism. The 500,000 mostly Chinese migrants who were forced into the villages gained land rights for the first time and proved loyal to the British cause.

Contemporary academics work up the New Villages into a Wagnerian drama of repression and control, ignoring their success and legitimacy with the residents. The insurgency’s membership, which had peaked at 8,000 in 1952, collapsed by 1957. Monthly attacks fells from 100 to 20. As U.S. military strategist Wade Markel wrote: “The evidence suggests that the main lesson to be drawn from the British practice of counterinsurgency is that physical control of the contested segment of the population is essential.”

While the French had lost the stomach to defeat communism in Southeast Asia, the British took it head on. Thompson was justifiably proud of how the British saved Malaysia and Singapore from collectivization and terror. He was called upon by the Americans to help them in Vietnam in 1964. His advice – focus on a defensive war to build up a South Vietnam that is “free, united, independent, politically stable and economically expanding” rather than an offensive one to drive the insurgents out of the country – was not closely heeded despite an attempt to replicate the New Villages program there.

Historians of colonialism like Elkins always end their tales of colonial oppression at independence. This allows them to ignore the fact that postcolonial leaders in places like Malaysia, Singapore, Thailand, and Indonesia carried on the same policies as their colonial rulers (or, as in Africa, abandoned them with disastrous results for “freedom and human dignity”). In Malaysia, the communists restarted their insurgency in 1968. Again, there was no local support. They finally gave up in 1989. The Democratic People’s Republic of Malaya never came into being. Thank the British.

Bruce Gilley is Professor of Political Science, Portland State University. He is the author of “The Case for Colonialism”, The Last Imperialist: Sir Alan Burns’ Epic Defence of the British Empire, and The German Colonial Achievement and Its Aftermath. A graduate of Princeton University and the University of Oxford, he is a member of the board of the National Association of Scholars.