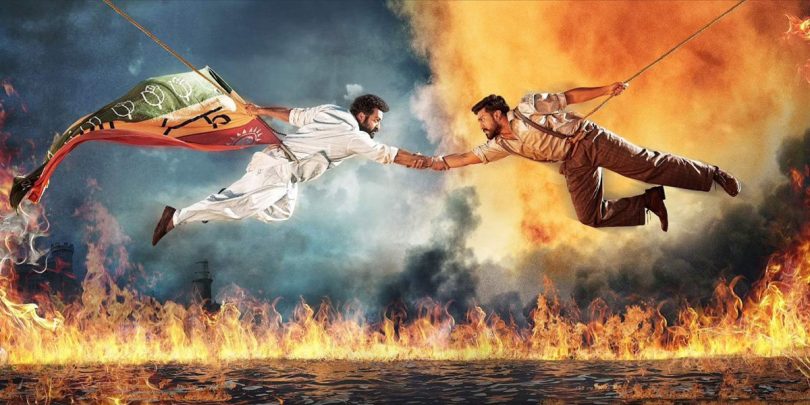 The vogue for facile anti-imperialism is not innocent. Apart from the distortions and slanders it often peddles, it also panders to some nasty political trends.

Netflix is promoting a new pseudo-historical blockbuster, an Indian film which has been playing to packed houses at home, and will soon be available round the globe.  It is called RRR (which stands for Rise, Roar, Revolt) and those expecting the usual Indian crowd-pleaser featuring magic, romance, stiff-upper-lip male heroism, and improbably gory violence will not be disappointed.  It is set in the 1920s, when India was still in the British empire.  The villains are British.  No surprises there.  But the portrayal of the two main British characters, ‘Governor Scott’ and his wife, is unusually nasty and at the same time amazingly silly.

Among other incidents, the Scotts kidnap an Indian child and try to murder the mother.  Hapless Indians are brutally tortured by assorted Brits.  To portray British officials and soldiers roaming the country casually committing crimes is a sign of absolute ignorance or of deliberate dishonesty.  The Indian Civil Service—the highest ranks of the administration—were regarded as an incorruptible elite, highly selected and dedicated to their jobs.  In any case, in the 1920s, many of them were Indians: in 1929, there only 894 British officials in the ICS.  So viewers of RRR will have to imagine Indian colleagues and indeed Indian superiors sitting back and allowing rogue Brits to commit murder.

If similar films were made slandering other nations, they would be regarded as crudely racist.  Imagine a film showing twentieth-century Nigerian rulers as cannibals, or Hindu politicians burning widows alive.  But we can’t imagine such films, because they would not be made.  However, the British have long been fair game.  Usually, we shrug this off.  We have played such an important role in the world over the last few centuries that we have accumulated enemies as well as friends.  In many nationalist myths, we are cast in the role of villains.  It’s a way that quite a few countries make up heroic stories about themselves.

But that is no reason why we should accept these stories as true, or start apologizing for things that did not happen.

That is not to say that there is nothing to regret.  Almost every conversation about the British Raj sooner or later mentions the Amritsar Massacre in 1919, when a squad mainly of Gurkhas commanded by a British officer opened fire on an illegal demonstration, and killed several hundred people.  Yet this was regarded at the time as a unique and shocking atrocity.  Churchill condemned it in parliament.  The officer responsible was sacked.  But priests of the Golden Temple in Amritsar (the holiest Sikh shrine) thought he had done the right thing, and made him an honorary Sikh.

I have stood on the spot where the massacre took place, with feelings readers might easily imagine.  Some young Indian men came up to me.  I was expecting at least a reproachful comment.  But they just wanted to say hello and practise their English.  I mention this because hardly any British person who has been to India—and I have been half a dozen times to as many different regions—can have experienced hostility arising from the memory of British rule.  Usually the opposite is true.  I know Indians whose parents or grandparents held office under the Raj.  Indeed, in the 1920s, when this film is set, India was mostly run by Indians, under fairly distant British supervision.  The distinguished Indian writer Nirad C. Chaudhuri (whose father was a nationalistic city official) recalled that he had never met or even seen an Englishman during his childhood, until a British inspector came to his school—and presented him with a paintbox.

So films like RRR do not reveal some hidden truth about the past, nor do they express genuine popular feeling.  They try to stir up synthetic emotions.  Their main purpose, of course, is to entertain and make money.  So should we just laugh, and even enjoy the melodrama?  Perhaps.  But although absurdly unbelievable, we know that nowadays people will swallow almost anything bad about the British empire.  Doubtless many viewers in a range of countries will regard this as just as accurate as the most serious academic study.  British adolescents will watch it too.  Perhaps it will be discussed in schools as a piece of historical evidence.

But the worst result will be in India.  RRR panders to the reactionary and violent Hindu nationalism that is coming to dominate Indian culture and politics, fanned by the Modi government.  Those who suffer from this are not the British, but Indian minorities, above all Muslim but Christian too, and indeed any liberals who stand up against extremism, persecution and bigotry.  In reality, RRR does not record the nastiness of 1920s British rule, but it does reflect the growing nastiness of today’s India.  Netflix should be ashamed for promoting it.