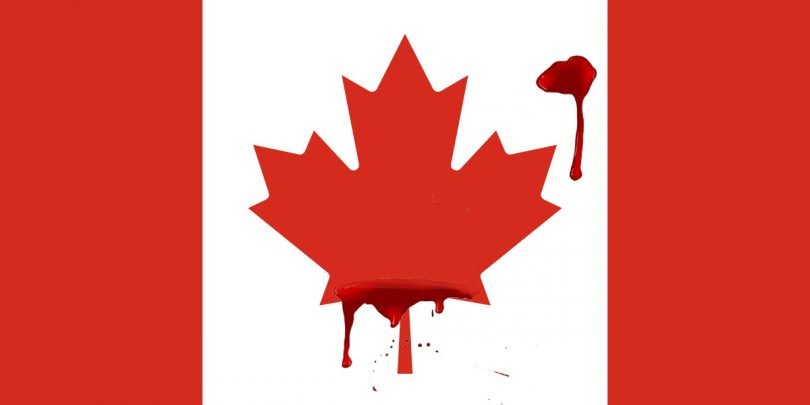 We have previously published material on the extraordinary claims of ‘genocide’ in Canada, based on stories of mass abuse, killing and secret burial of indigenous children in boarding schools, mostly run by the Catholic Church.

Abuse of various kinds occurs in boarding schools all over the world, and they rightly cause public shock and demands for retribution.  It may indeed have been sadly common in schools for indigenous children in Canada, perhaps aggravated by underfunding and inadequate supervision.  But the claims being made in recent years go very much further and amount to mass hysteria.

Among the accounts to be found on the internet was one asserting that Queen Elizabeth had kidnapped and murdered ten children from one school while on a picnic in 1964 (when she was not even in Canada) – a story circulating for several years.

The stories on which such hysteria are based seem to have begun circulating in the 1990s.  Evidently, many of the extreme allegations originated with people who were mentally disturbed or dishonest, or both. Yet many of the stories – though presumably not that concerning the Queen — were accepted by many politicians, and even by the Canadian government itself, which, as we reported earlier, ordered the national flag to be flown at half mast, and it has also made very large sums of money available in order to seek evidence of mass killings and secret burials in unmarked graves, and to aid supposed survivors.  Many churches were burnt down or otherwise vandalized in consequence of these accusations.

Yet – despite the lavish funding — no evidence has been produced to support claims of killings and secret burials, in spite of their being given some credence by Canadian academics.  What can we make of this mind-boggling episode, which is still going on?  If this affair is undoubtedly at the most extreme and delusional end of the Woke spectrum, it nevertheless demonstrates the credulity of many, the dishonesty of some, and the power of intimidation exerted by Woke narratives.

A recent article by Tom Flanagan and Brian Giesbrecht published in the Dorchester Review (1 March 2022) examines the origins of these stories. To read the whole article see https://www.dorchesterreview.ca/blogs/news/the-false-narrative-of-irs-burials    We provide a few extracts here:

“RESIDENTIAL SCHOOLS took centre stage after Barbara Frum’s 1990 CBC television interview with Phil Fontaine in which Fontaine, then Manitoba Regional Chief of the Assembly of First Nations, unexpectedly made allegations of widespread sexual abuse at the residential school he had attended as a child:  “In my grade three class … if there were 20 boys, every single one of them … would have experienced what I experienced. They would have experienced some aspect of sexual abuse.”[4]  Although Fontaine did not elaborate, the scale of what he described suggested widespread student-on-student abuse.

Since that interview, preposterous stories have taken hold and become deeply-rooted in First Nations communities — stories of murders and clandestine burials on a large scale, of babies thrown into furnaces, of children imprisoned in underground chambers and cisterns, hanged in barns, and shocked in electric chairs,[5] with the result that $321 million dollars of federal government funding has been committed to searching for unmarked graves all over the country, and helping survivors heal from their trauma.[6]

There is no documentary evidence to support these stories. There is no record, for example, of a single student being murdered at a residential school —never mind thousands — in the 113-year history of residential schools. Nor — and this is key — are there any records of indigenous parents claiming that their children went to residential schools “never to be seen again,” as claimed by Truth and Reconciliation Commissioner Marie Wilson.[7]

This has not stopped indigenous leaders from proclaiming these conspiracy theories as fact, nor has it stopped the media and general public from believing them. In 2021 there were vigils across the country for the 215 children supposedly buried in secret by Catholic priests and brothers in the apple orchard at the former Kamloops Indian Residential School, despite the fact that the RCMP and the BC Coroner declined to investigate, suggesting they did not give credence to the claims. To make matters worse, the original story of 215 burials in the apple orchard at Kamloops was amplified in a recent CBC Fifth Estate program, The Reckoning: Secrets Unearthed by Tk’emlúps te Secwépemc,[8] to include stories of sexual abuse, children who mysteriously disappeared, the lifeless bodies of four boys hanging in a barn, abortions, and babies thrown into the school furnace.[9]

IT IS WORTH noting that prior to the interview with Phil Fontaine in 1990, one would have had to look very hard to find anything even resembling these claims.  It was only after the Fontaine interview that stories of residential school atrocities gained ground, even though they were contradicted by the explicit evidence of some contemporary indigenous leaders.

Former Dene Chief Cece Hodgson-McCauley, whose weekly newspaper column, Northern Notes, ran for thirty years, was the most outspoken.  In a column in 2018, she wrote: “We all heard of horrible lies created by some individuals in order to receive as much money as they could.”[13]  In her final column she said, “I always tell you the truth.”[14]

In his autobiography, Breaking Trail,[15] Senator Len Marchand, the first status Indian to be appointed to the federal cabinet, recounted his experience at Kamloops Indian Residential School, which he attended by his own choice for a year.  Marchand praised the quality of teaching there and said he knew of no abuse: “The reader might be expecting me to tell a few horror stories about physical and sexual abuse at the residential school. But I know of no incidences at KIRS.”[16]

Chief Clarence Jules, a respected three-term chief of the Kamloops band, also attended Kamloops Indian Residential School. In Our Chiefs And Elders, published in 1992, he complained that he had been strapped for speaking his own language at the school, but thought it was “probably the best system we had around at that time.”[17]  He said nothing about murder and mayhem, nothing about secret burials or any of the other fantastic claims now being made ….