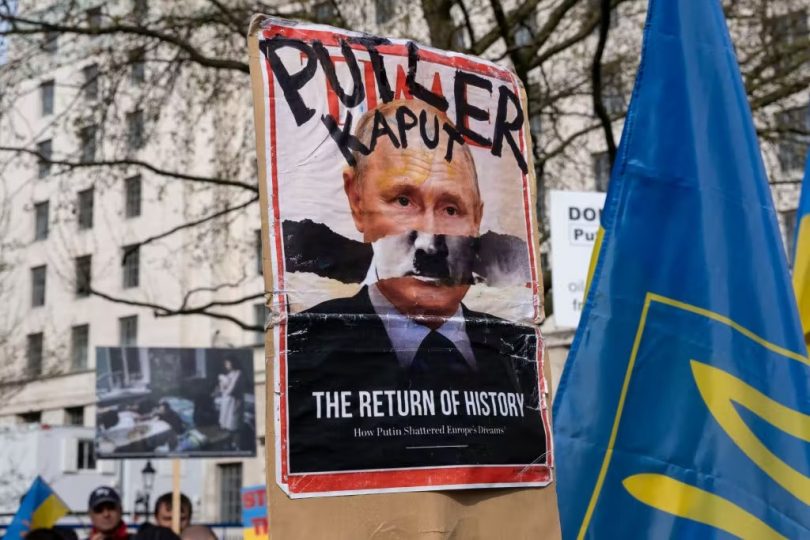 We should not believe those who tell us that our own history, culture and politics are morally indistinguishable from those of Russia today, and just as compromised by falsehoods and delusions. Corrosive cynicism about our own history and political values suits the Russian state’s purposes very well.

This article was first published in The Critic, as is posted here by their kind permission.

A favoured Kremlin disinformation tactic is not simply to deny clear evidence of Russian or Soviet crimes, but to distract attention from them by claiming that the democratic world is no better. As Peter Pomerantsev has documented, the purpose of Russian propaganda is both to spread falsehoods and to sow a pervasive, postmodern doubt as to the very possibility of truth or objectivity. A corrosive cynicism about our own history and political values thus suits the Russian state’s purposes very well. As I was walking to a rally in support of Ukraine held outside the Radcliffe Camera in Oxford on 27th February, three days after the Russian invasion began, I overheard a student who was walking away say ‘well, we invaded Iraq, so we’re not in a position to criticise’. This was a (hopefully unconscious) echo of one of the many specious justifications offered for Russian aggression by Vladimir Putin in his strange, rambling address to the Russian people three days before the invasion. One callow student opinion, casually expressed, doesn’t count for much, but very similar sentiments can be found in a spectacularly ill-judged emission by Pankaj Mishra in the London Review of Books, where the eminent author and critic appeared to suggest that Putin had received his lessons in aggression from a succession of American Presidents, beginning with Bill Clinton and culminating with – well, you can probably guess. In Mishra’s world nothing can Trump the evil of American empire, so the real danger posed by the Russian invasion of Ukraine is that “an ageing centrist establishment … seems suddenly galvanised by the prospect of defining themselves through a new cold war” – in other words that the united western response to Russian aggression is actually a bad thing. To borrow Leila Al-Shami’s term, which she coined in reference to atrocities committed by the Assad regime and the Russians in Syria, it is a perfect example of “The ‘anti-imperialism’ of idiots”, a product of ignorance and narcissism:

“blind to any form of imperialism that is non-western in origin. It combines identity politics with egoism. Everything that happens is viewed through the prism of what it means for westerners – only white men have the power to make history.”

Iraq and Afghanistan are thus frequently and predictably cited by those on the Left who wish to make out that Russia’s war in Ukraine is all the West’s fault, and that there is no real moral distinction to be made between authoritarianism and democracy.

Al-Shami’s argument has been extended by Taras Bilous, Jan Smolenski and Jan Dutkiewicz into a powerful critique of ‘Westsplaining’ the Russian invasion of Ukraine, referring to the widespread tendency in some parts of the Left (and indeed the Right) to blame it on NATO, rather than Russian aggression. None other than the Guardian’s George Monbiot has taken up this critique and apparently understood it, which makes his own contribution to the genre all the more baffling. In an article entitled “Putin exploits the lie machine but didn’t invent it. British history is also full of untruths” he writes:

Here an older historical example of western perfidy takes centre stage, namely the British Empire – or a caricatured version of it. Comparing the 1943 Bengal famine to the Ukrainian Holodomor of 1932-3, Monbiot writes that “Britain’s cover-up was more effective than Stalin’s” and that “as in Ukraine, natural and political events made people vulnerable to hunger” in wartime Bengal. But in 1930s Ukraine the population starved because the Soviet state deliberately took away their food through excessive grain procurement and then forcibly collectivised agriculture. While the causes of the Bengal famine continue to be a subject of debate, none of the many distinguished historians and economists who have written about it – such as Amartya Sen, Paul Greenough or Cormac O’Grada, to name just a few – would claim that the British colonial state did anything remotely equivalent to this. More importantly it is a grotesque distortion to say that the Bengal famine was ‘covered up’ in the same way as the Holodomor – it was the subject of a public enquiry from 1944-5, which published a two-volume report whose statistics formed the basis for Sen’s Nobel Prize-winning work on the role of wartime price inflation and the consequent decline in the exchange entitlements of Bengal’s poorest. While it had many flaws, you will struggle to find any equivalent Soviet enquiry into the Ukrainian or Kazakh collectivisation famines, the very existence of which was denied until late perestroika. Stalin even deliberately suppressed the inconvenient results of the 1937 census which revealed the vast scale of the resulting demographic collapse.

Here and in an earlier (but curiously similar) article Monbiot goes on to cite Mike Davis’s Late Victorian Holocausts in support of the claim that the terrible Indian famines of the 1870s were also a deliberate product of British rule. Davis’s work, first published in 2001, is a staple of those wanting to claim an equivalence between Nazi or Soviet crimes and those of the British Empire, and he is regularly cited by Priyamvada Gopal and Priya Satia, amongst others, as the unquestioned authority on famine under British rule. But Davis’s book is a polemic, riddled with elementary errors of historical fact and tradecraft. Its central arguments have long since been undermined. Nor is any of this is in any way a ‘hidden history’ – all the famines which occurred under Crown rule in India were followed by official enquiries which sought (very imperfectly, it is true) to learn lessons that would help prevent them in future – Tirthankar Roy has suggested that by 1915 those efforts had in fact yielded considerable success in reducing famine mortality. Above all, this is the reason why we know so much about famine in British India, and why poorly-trained historians like Davis have taken the abundance of evidence available for this period as proof that famine became more frequent than it had been in pre-colonial India (when of course no such enquiries existed). It is equally untrue for Monbiot to claim that “Only when Caroline Elkins’s book, Britain’s Gulag, was published in 2005, did we discover that the UK had run a system of concentration camps and ‘enclosed villages’ in Kenya in the 1950s” – He surely ought to know about the public and parliamentary campaign which Barbara Castle led from 1954 to expose the truth about the camps. As a devastating review of Elkins’s book by the Kenyan historian Bethwell Ogot put it: “much of this is not new. One therefore wonders why Elkins thinks she is telling an untold story”.

The violence and oppression of the British Empire – whether this was the brutal response to the Indian rebellion of 1857, the Boer concentration camps, the Amritsar massacre of 1919, the suppression of Mau-Mau or the Malayan insurgency – were topics of open political debate at the time, and have been exhaustively and critically studied by historians since at least the 1950s. The point is not that Western, Liberal states do not do bad things or tell lies about them – it is that even in colonial settings they have fostered a culture of dissent, enquiry and free speech that allows these lies sooner or later to be exposed, and for a measure of justice to be done. This was not true in the USSR, and it is not true in Russia today. That bitter critic of the British Empire, George Orwell, understood this distinction – in 1949 he noted that M. K. Gandhi’s extraordinary success in rallying opposition to British rule in India by non-violent means was dependent on his ability to command publicity:

“Without a free press and the right of assembly, it is impossible not merely to appeal to outside opinion, but to bring a mass movement into being, or even to make your intentions known to your adversary. Is there a Gandhi in Russia at this moment? And if there is, what is he accomplishing? The Russian masses could only practise civil disobedience if the same idea happened to occur to all of them simultaneously, and even then, to judge by the history of the Ukraine famine, it would make no difference.”

Russia also had a colonial empire – in Siberia, the Caucasus and Central Asia – but if the Tsarist and early Soviet periods produced some prominent critics of Russian colonialism, notably Leo Tolstoy, that tradition was largely crushed under Stalin, while today there is a near allergic reaction even to the use of the term ‘colonialism’ to describe any aspect of the Russian Empire or Soviet Union’s history. In 2016 Russia’s National Security Council decreed that “Speculation on the Colonial Question” was a form of “historical falsification” that should be combatted by the state. Today this state-led assault on historical truth is even fiercer, and its deadly consequences in the real world have now become apparent. There is no monocausal explanation of Russia’s war in Ukraine, but it is rooted in a profound intellectual corruption which has long sought to prohibit the discussion of this and other aspects of Russia’s past, whilst throwing the power of the state behind a series of false historical narratives – the “historical unity” of Russians, Ukrainians and Belorussians is one. Another is that Russia is always a victim, and never the initiator of aggression, which always comes from the West. This is seen very clearly in the Putin regime’s account of the Second World War, in which little or no reference is made to the Soviet invasions of Poland in 1939 or Finland in 1940, while the worst crime of the Nazi regime was not the Holocaust, largely elided here as it was in Soviet narratives, but the invasion of the USSR in June 1941. Much of this work of historical falsification has been overseen by Vladimir Medinskii, former Russian Minister of Culture and proud non-author of two wholly plagiarised doctoral dissertations, who is probably behind the text both of Putin’s ‘essay’ on Russian-Ukrainian relations and of his address to the Russian people on the eve of the invasion. He is currently the head of the Russian delegation at the peace talks with Ukraine, which does not bode well for their outcome.

The Russian regime did not learn to tell lies from the west – and we should not believe those who tell us that our own history, culture and politics are morally indistinguishable from those of Russia today, and just as compromised by falsehoods and delusions. At the end of that protest in Oxford against the Russian invasion, a Ukrainian student read out Churchill’s speech of 9th June 1940: ‘We shall fight on the beaches.’ Western democracy is full of imperfections, and has often been guilty of terrible crimes – but it is still an alternative to Russian or Chinese authoritarianism that is worth fighting for. Thank God the Ukrainians understand that, even if we don’t.

Dr Alexander Morrison is a Fellow and Tutor of New College, Oxford, and Associate Editor (History) of Central Asian Survey.  His most recent book is The Russian Conquest of Central Asia. A Study in Imperial Expansion, 1814 – 1914 (CUP, 2020)