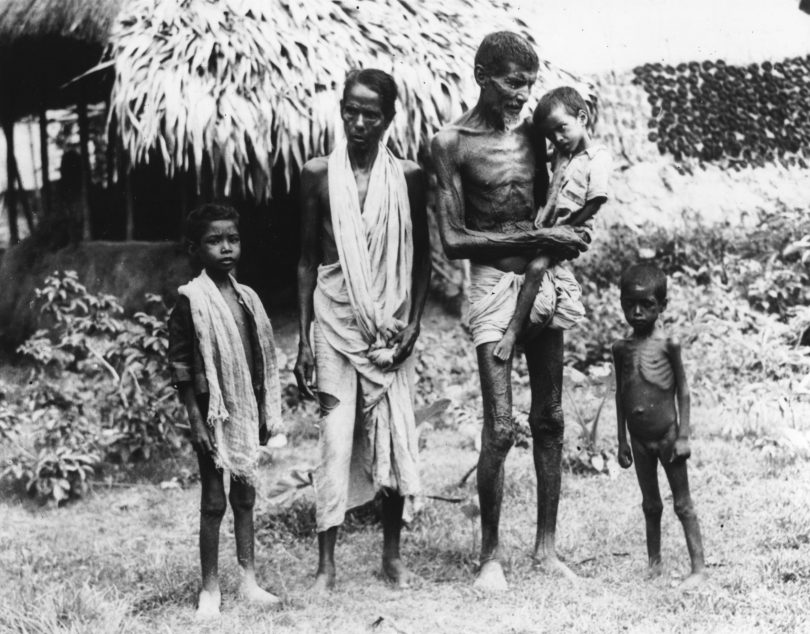 South Asian history is dynamic and not unchanging, yet certain canards are set in aspic. I have no stomach to explain why Sir Winston Churchill isn’t India’s Hitler. If I’m understood, more words are unnecessary; if I’m not likely to be understood, they are useless. The latter is the default mode of existence of Hindu nationalists. On to the famine.

The famine absolutely happened, it was, surprisingly due to a number of factors and not engineered by a cartoon villain.

The plurality of opinion is that the famine was caused by a combination of poor regional administration (price controls on the transportation of rice between regions enacted by Indians in the provincial legislature, poor general colonial administration of the food system), inadequate methods to combat price inflation due to profiteering by merchants at the start of the shortage), supply issues caused by a climate disaster (a major cyclone), crop failure due to brown spot fungal infection, as well as the war with Japan in India and Burma (the collapse of the Rangoon-Bengal trade route due to the war with Japan and the need to supply the British Indian army in north eastern India and Burma).

Tauger and Padmanabhan broadly claimed the supply issue due to the fungus and cyclone was the chief cause. The latter saying so clearly:

“Though administrative failures were immediately responsible for this human suffering, the principal cause of the short crop production in 1942 was the epidemic of Helminthosporium oryzae…Nothing as devastating as the Bengal epiphytotic [i.e. plant disease] of 1942 has been recorded in plant pathological literature. The only other instance that bears comparison in loss sustained by a food crop and the human calamity that followed in its wake is the Irish potato famine of 1845.”[1]

Tauger further states that the actions of the Japanese hindered effective relief efforts and points out to successful handling of other contemporary Indian food crises, not exactly the workings of a government intent on mass murder of its own people.[2]

Amartya Sen claims it was an “entitlements famine” which saw a supply issue become a famine through ineffective inflation controls which fatally disrupted the entire rice market and saw hoarding and price gouging across regions.[3]

Ó Gráda says that, although there was an underlying food shortage, the focus on the war effort led the British to redirect food supplies to population centers required for the war effort, compounded this shortfall and caused the famine. Yet he does not suggest that the Bengal famine was deliberately created to starve the Bengalis. His general assessment being that the famine was ‘largely due to the failure of the British authorities, for war-strategic reasons, to make good a genuine food deficit’.[4]  Law-Smith blamed Lithlingow, the Viceroy, for not taking the problem seriously until it was too late and not challenging provincial autonomy and properly intervening.[5] Tirthankar Roy attributes the delayed response to rivalry and misinformation spread about the famine within the local government, particularly by the Minister of Civil Supplies Suhrawardy, who maintained there was no food shortage throughout the famine, while noting that there is little evidence of Churchill’s views influencing War Cabinet policy.[6]

So there it is, a short summary of the literature on this tragic event, utlimately one of a number of famines caused by the Nazis and their allies and collaborators such as the rest of the Axis Powers and Subhas Bose’s militia.

Hira Jungkow is a student in economics at the London School of Economics. His parents are Indians who fled Uganda during the reign of Idi Amin, and came originally from East Bengal.  He is fluent in Hindi and Bengali.