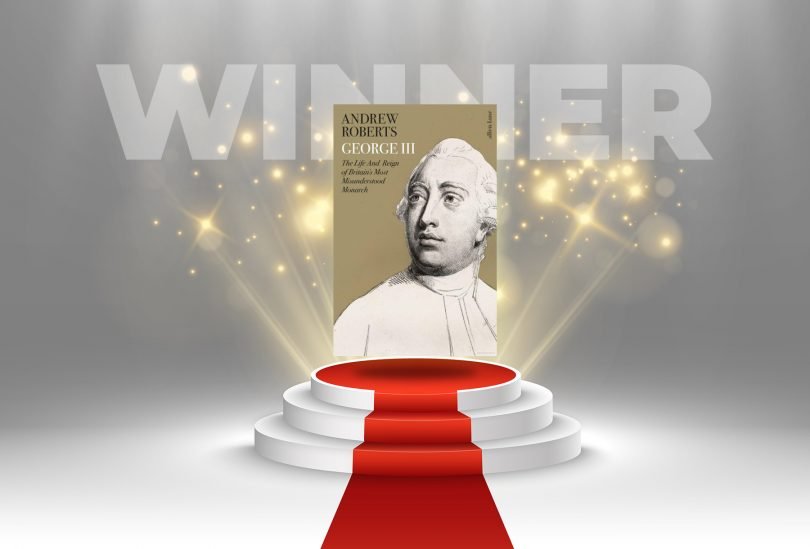 We had a very strong shortlist, drawn up by a subcommittee I was glad to chair. We were impressed by the range and quality of work being done in many historical fields, from medieval Russia to twentieth-century Britain.

By a strange coincidence, as we were preparing to announce the result of the prize, we read in last week’s Sunday Times an exposé of the foibles and iniquities of so many of today’s cultural, artistic and literary prizes: judges who don’t read the books, for example, or who choose according to the author’s photograph.  Or prizes awarded in reality for political activism and political correctness.  But this prize, we can confidently say, is different.  This is because it was the readers of History Reclaimed who made the initial nominations, and they who have now made the final choice.

We had a very strong shortlist, drawn up by a subcommittee I was glad to chair.  We were impressed by the range and quality of work being done in many historical fields, from medieval Russia to twentieth-century Britain.  All these books are marked by originality of research and careful analysis.  They tackle important, new and sometimes controversial topics. History must not just be a subject for academics.  Nor certainly should it be a pretext for ideological propaganda.  It is an important and ever evolving part of a nation’s culture, and shapes our shared heritage.  These books show that serious research can be made attractive to a wide readership through lively and lucid writing.

History Reclaimed has taken the opportunity to interview our shortlisted authors and ask them to talk about their books and their reasons for writing them.  This alone, we think, is a justification for having set up the prize.  All these podcasts are now available on the History Reclaimed website.

All the shortlisted works attracted support.  There was, however, a clear winner: Andrew Roberts, for his biography of George III.

At an earlier stage, after he had first been nominated, Professor Roberts thought that, as a member of History Reclaimed, he ought to withdraw.  The editors firmly persuaded him not to do so.  It would for one thing set a precedent that no History Reclaimed historians could be considered for the prize, which would partly negate the purpose of celebrating brave and challenging historical writing.  So the editors decided that the winner should be chosen by vote of the readers, and they asked me to act as independent chair of the whole process, which I was delighted to do.

It is my pleasure now to announce that the winner of the 2021 History Reclaimed Book of the Year Prize goes to Professor Andrew Roberts’s George III: the Life and Reign of Britain’s Most Misunderstood Monarch, published by Allen Lane.

Our shortlisted books for your reference:

An exploration of the history of Russia through the Volga from the seventh century to the present day. An artery for trade and a testing ground for the Russian Empire’s control of the borderlands, it featured in Russian literature and art, and was crucial for the outcome of the Second World War at Stalingrad. Named a Best Book of 2021 by the Financial Times.  “A memorable journey into the heart of Russian social, political, and cultural history.” Jennifer Eremeeva,  Moscow Times.

Colonisation is almost universally condemned now, but this book presents it as a process by which societies achieve an equilibrium with each other when they come into contact. This is the irreducible organising principle of all colonisation. It is organic, unwilled, and possesses an inner determination that transcends the best-laid schemes of every type of coloniser. The importance of this book lies in the new model it creates for interpreting colonisation, and how it reveals that the process is fundamentally the consequence of a Newtonian-type natural law rather than of ill-intent.  [Note: it is priced at £120 in hardback, but is available to the general reader as an e-book at £31]

Nicholas Orme, Going to Church in Medieval England (Yale UP, 2021)

A richly illustrated account of parish churches and churchgoers in England, from the Anglo-Saxons to the mid-sixteenth century. Parish churches were at the heart of English religious and social life in the Middle Ages and the sixteenth century. This book shows how they came into existence, who staffed them, and how their buildings were used. Orme explains who went to church, who did not attend, how people behaved there, and how they—not merely the clergy—affected how worship was staged.

A boldly revisionist view of a king generally regarded as boring and unimaginative.  “Apart from being a wonderful biography – indeed, the best royal biography to be published since James Pope-Hennessy’s Queen Mary (1959) – this book makes a revelatory distinction between two modes of being. Until now, George V has widely been regarded as one of the dullest monarchs, perhaps dullest human beings, who ever lived. Jane Ridley, however, asserts that he was not dull, he was ordinary. … Ridley’s is actually a book about innate, quiet decency, surviving in an indecent, rowdy world.”  A.N. Wilson in TLS

“There are only a few books which receive universal acclaim in almost every review, by academics, popular historians and figures in public affairs, and which deserve it. This is one of them. Not only is it a provocative and hugely detailed reconsideration of George III – a monarch more misunderstood in America than in the UK – it is also probably the most important, well-researched and sensitive fresh study of any British monarch in the last 50 years.”

Edward Shawcross, The Last Emperor of Mexico: A Disaster in the New World  (Faber, 2022).

“Edward Shawcross’s entertaining history explores one of the most reckless political and military adventures of the 19th century … the attempt in the 1860s to establish a monarchy in Mexico under Maximilian, the brother of Franz Joseph, emperor of Austria.  A superbly entertaining and well-researched account that sets a new standard for histories of the doomed escapade.”  Financial Times

“Caroline Shenton’s vigorously researched and highly entertaining new book explores … the safe-keeping of artistic treasures during the Second World War. It is not a tale of high drama – there’s no heroism or derring-do – but the dogged patience, hard work and quiet intelligence on display are as heart-warming as the tetchiness and snobbery are all too human. ‘Ordinary people were called upon to achieve extraordinary things in the middle of a national crisis,’ Shenton claims – and with a bit of fuss and muddle, they did.” Rupert Christiansen, Daily Telegraph.

“It is based on deep research and is particularly good on the personalities involved and the unusual political climate in the aftermath of the First World War. In a reflective epilogue, Townshend reiterates the late John Hume’s assessment that the border is one in people’s minds, one of identity, and, as the ongoing Brexit imbroglio and the recent upsurge in violence attest, there is still some way to go on that front.” Marianne Elliott, TLS. “A model of research and analysis … Townshend’s concise and intelligent book tells a painful story that is probably not yet over.” Simon Heffer, Daily Telegraph.  A New Statesman, Telegraph and Financial Times Book of the Year.

Please vote by using the facility below.