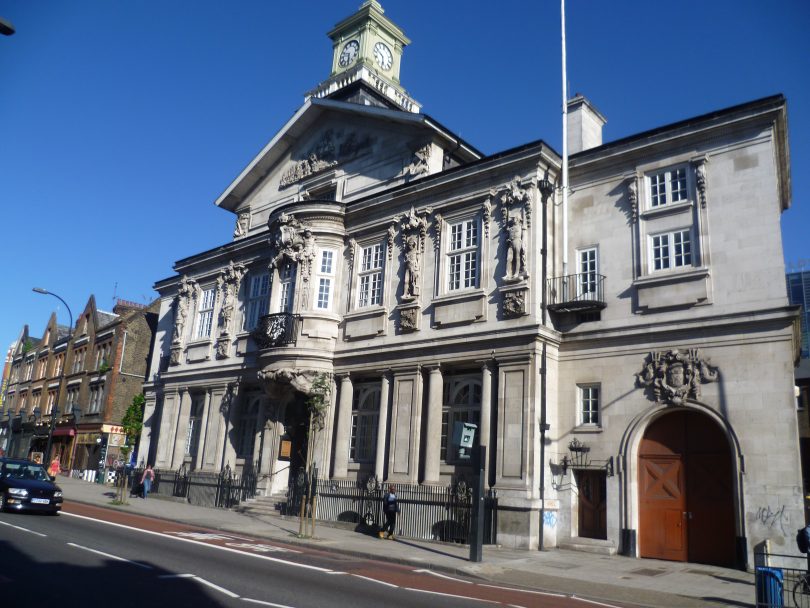 HR has discussed the historic significance of the statues on Deptford Town Hall, now part of Goldsmiths University. But there are important aesthetic considerations too.

See our previously discussed article here:
Submission by History Reclaimed to the public consultation on the Deptford Town Hall Statues

Deptford Town Hall (1905) is an outstanding example of turn-of-the-century Edwardian Baroque revival architecture by perhaps the foremost practitioners of that style and era: Lanchester & Rickards. Their works include the Methodist Central Hall in Westminster and Cardiff Town Hall. This is architecture of grandeur and panache, admired even by upholders of the modernist architecture that succeeded it, such as Nikolaus Pevsner. In the hands of Lanchester & Rickards, Baroque is handled with supreme confidence, perhaps evoking British power and self-esteem of the period: think Buckingham Palace and the Queen Victoria Memorial.

Ornament – and more elaborate architectural sculpture – was integral to the aspirations and achievements of Edwardian Baroque. Susan Beattie in her definitive book The New Sculpture (1983) regards architectural sculpture as a hugely significant component of the ‘renaissance’ that British sculpture underwent during this period and calls the outcome ‘the triumph of the collaborative ideal’ between architects and sculptors. Lanchester & Rickards’ designs would have envisaged the integral role of sculpture from the outset, and in this instance they collaborated with the eminent sculptor Henry Poole, an Associate of the Royal Academy, who was a particular specialist in the genre. In a brilliant analogy, Beattie likens buildings of the period to caskets, and their sculpture to jewels: would anyone in their senses propose knocking jewels off caskets?

Anyone bothering to study the façade will see that Poole’s architectural sculpture doesn’t just comprise the four admirals but also incorporates the central feature of a round arched doorway flanked by figures of Tritons as corbels on the ground floor; there is an oriel window on the first floor with a carved relief of a ship’s prow and a pediment containing a tympanum depicting a naval battle above that: in short, this constitutes a concerted, meaningful and highly attractive programme of architectural sculpture which helps to define the entire building.

The parallels with the Rhodes building at Oriel College, Oxford by Basil Champneys, a contemporary of Lanchester & Rickards, are striking. Precisely the problems of removing Rhodes apply – four times over – to the Deptford Town Hall statues. Both are protected by law as Grade II buildings. As well as raising contentious issues of erasing history, the removal of the statues would erase heritage and would involve complex and contentious legal challenges and counter challenges that would not obviously materially benefit any Black Lives. The connections between the murder of George Floyd and the violation of Edwardian Baroque architectural sculpture would be almost risibly tenuous were it not for the tragedy that unwittingly caused this controversy.

Even more than the Rhodes building, Deptford Town Hall and its future must involve ‘town’ as well as ‘gown’: till 1998, when it was acquired by Goldsmiths, Deptford Town Hall belonged to the people of Deptford and in a sense it still does. Deptford does not have the richness of heritage that Oxford enjoys and to potentially vandalise its crown jewel in the name of anti-slavery is a terrible prospect. In this consultation exercise, Goldsmiths should go out of its way to gauge local people’s opinions, not just the transitory student population.

If I can be excused for citing a New Zealand parallel, we could do much worse than look at the award-winning work of Associate Professor Grant Duncan of Massey University, who noted how many called for the removal of colonial statues last year as part of anti-racism protests related to the Black Lives Matters movement. But more of Māori in the survey that he devised were in favour of leaving the statues than taking them down, “by quite a big margin”. “We asked what’s your opinion about removing statues and of those who ticked the Māori box, the range was quite wide,” he said. “You shouldn’t make generalisations about a person’s opinion based on their ethnicity.” It would not surprise me if Deptford people of all ethnicities feel similarly, with an additional element of concern for the wellbeing of a loved and admired historic building in their midst.