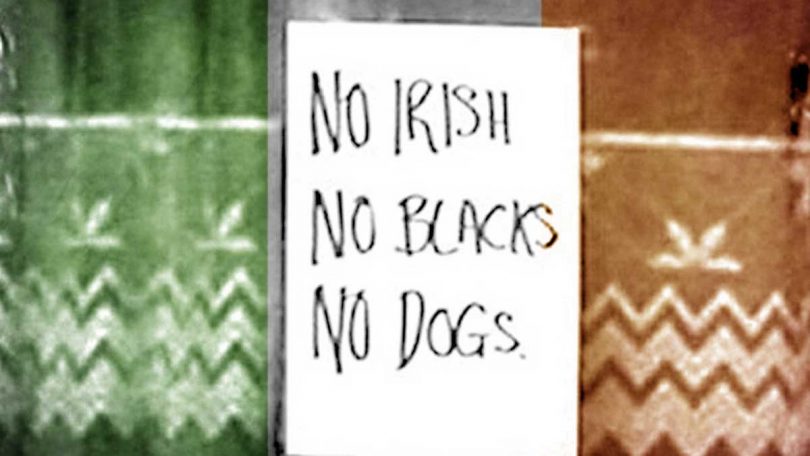 The notorious sign “No Irish no blacks no dogs”, supposedly widespread in rented accommodation, has become a symbol of anti-Irish prejudice in Britain. The evidence, however, suggests that this sign may have been invented later, and that anti-Irish feeling barely existed.

Folklore suggesting the Irish in post-war Britain faced prejudice comparable to that suffered by Commonwealth immigrants is encapsulated in the phrase no Irish no blacks no dogs.

The term emerged in the 1980s initially as “no Irish no coloureds no dogs” which a polemical pamphlet claimed was “all too common” in 1950s Britain.[1]  One historian believes the subsequent word change (from coloured to black) undermines this assertion.  Terminology changes but not what was supposedly written on publicly-displayed notices in a moment in time.[2]  No verification exists for either version.

Professor Margaret MacMillan in a 2018 BBC Reith lecture said 18th century English taverns displayed “no beggars, no soldiers, no dogs”.  So this three-part phrase may have long been an adaptable template.

Surveys in 1958-59 by Professor Ruth Glass found frequent racial references in newspaper accommodation ads in London: she summarised these as “no coloured, Europeans only, white people only”.  She speculated that some ads disguised anti-semitism; she did not mention the Irish.[3]

No version of no Irish no blacks no dogs appeared in the London-based West Indian Gazette (1958-65) which reported that “‘Sorry No Coloured’ and ‘Europeans Only’ are the order of the day” (November 1960).  In Colour Bar (1954), Sir Learie Constantine wrote warmly of the Irish but made no assertion of shared victim status as immigrants.

An Irish government commission on emigration (1948-54) said Britain generally presented “the Irish immigrant with no difficulties of language or barriers due to race thus causing him a minimum of personal and social adjustment”.[4]

During a week-long Irish National Festival in Birmingham in 1953 thousands marched for St Patrick’s Day, with a Tricolour and shamrocks being presented to the Lord Mayor and Lady Mayoress.[5]  Oliver Reilly visited Birmingham in 1957 for the Irish Catholic magazine The Furrow “to find out for myself the truth about the lot of our people over there”.  He was shocked at slum lodgings but “amazed” at the “courtesy and kindness of the English everywhere”.

A large-scale 1960 study by English Catholic sociologists reported “social prejudices against the Irish are dying fast thanks largely to the impression made by Irish nurses and Irish radio and television stars”.[6]  In 1954 the Irish Press London correspondent said the BBC was “doing us proud” for St Patrick’s Day.

English sociologists noted “the complete political acceptance of Irish immigration in Britain”.[7]  When a local newspaper in London did suggest immigration controls including “Eire”, Sir Oswald Mosley’s paper Action responded with an article headlined “Hands off the Irish!”  Action referred to “the coloured invasion” but insisted “Irishmen have long earned the right to come here”.[8]  One man told BBC radio: “I don’t mind Irish, Scotch; they all belong to the same country.  You don’t want a load of foreigners.. especially black anyway.”[9]

Paul Foot said Britain had “a strong pro-Irish element”; “resentment and propaganda is directed almost exclusively at the coloured immigrant”.[10]  Irish Democrat editor Desmond Greaves proclaimed: “Throughout Britain Irishmen are honoured by their fellow workpeople by being elected shop-stewards and trade union secretaries.” (July 1965)  After the Birmingham pub bombings the organiser of an anti-IRA protest in Manchester told the Guardian: “We are telling people not to panic into taking revenge against the ordinary decent Irish community.”[11]

BBC TV and Getty Images documented post-war notices targeting Commonwealth immigrants but with none referring to the Irish.  News photographer Paddy Fahey chronicled the Irish in England over the 1940s-1970s.  A published collection of his pictures conceded that nothing in his archive reflected “anti Irish feeling”.[12]

Then circa 1989 an exhibition in London by the Irish in Britain History Group included a photograph showing a window with “Bed & Breakfast NO IRISH NO BLACKS NO DOGS”.  A contemporary news clipping about the exhibition named the photographer as someone in the 1980s picturing what she believed had existed years earlier.[13]  Unsubstantiated claims were later made that the photograph dated from the 1960s though a landmark race-relations study (1964-1967) involving lodgings houses made no mention of such notices.[14]

More images with identical wording followed online persuading many people (including my relatives) that they had witnessed this.  One author cautions that “individuals [may] interweave a well-known communal memory into a personal life story”.[15]

The anti-Irish sign has lured academics.  J.A. Jackson in The Irish in Britain (1963) believed “the Irish immigrant enjoys equal opportunities in the job market”.  Yet in a well-referenced work he included unverified stories of anti-Irish accommodation notices.

Among 50 million Britons some such instances may have occurred, though anti-British sentiment in Ireland often primed emigrants to expect English antagonism thus stoking the rumour mill.[16]

Jackson concluded that anti-Irish prejudice existed “not as a major problem, but as a dangerous latent possibility”.  The first bit was right.

John Draper is a journalist and a subscriber to History Reclaimed

[4] A.E.C.W. Spencer, Arrangements for the integration of Irish immigrants in England and Wales (1960; published 2012 by Irish Manuscripts Commission) p 11

[13] News item on exhibition (undated): “Signs proclaiming ‘No Blacks, No Dogs, No Irish’ as pictured above by GABRIELLE HUMPHREYS were a disheartening sight not so very long ago for Irish immigrants…”