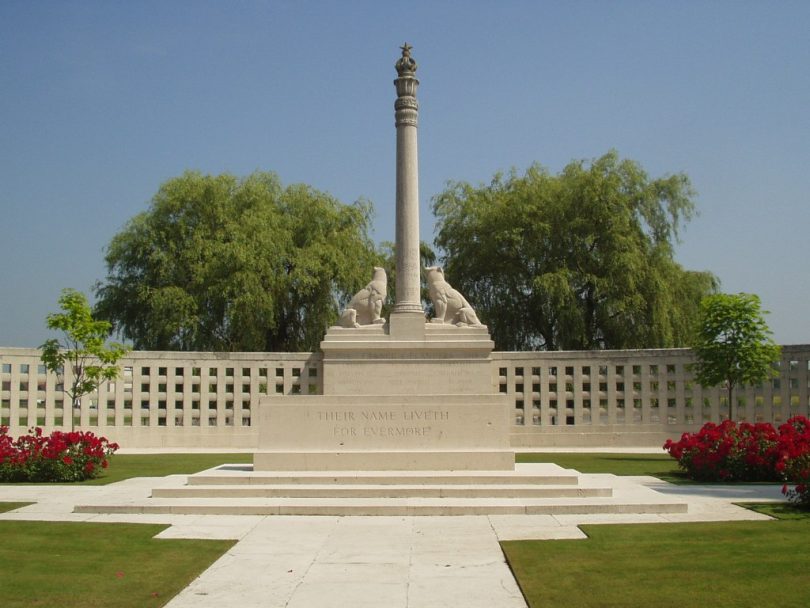 A debate over war graves threatens to mislead the public. A recent report asserts that treatment of war dead from the Empire showed “the entrenched prejudices, preconceptions and pervasive racism of contemporary imperial attitudes.” But the evidence shows the contrary: the Imperial War Graves Commission was committed to a racially egalitarian policy which it overwhelmingly followed.

The movement to “decolonise” that is sweeping feverishly through our schools, universities and cultural institutions is propelled by three axioms. The first is that British colonialism was essentially racist; the second, that British society today is structurally racist; and the third, that the latter is caused by the former. That is why we have to topple statues and erase street names that celebrate colonial heroes, since only by so doing can we repudiate the colonial roots of contemporary racism and liberate ourselves from its persistently, systemically poisonous influence. Or so it is claimed.

Two recent reports, however, have strongly challenged the first two axioms, and thereby dislodged the third. March saw the publication of the Sewell report on race and ethnic disparities, which presented hard social scientific data calling into doubt the assumption that unequal outcomes for non-white racial groups are always, or even usually, attributable to racism. It also bluntly contradicted the claim that contemporary Britain is structurally racist. Predictably, its conclusions were greeted with howls of protest, with several commentators simply unable to digest the idea that a racial inequality might not have racism as its cause.

The second report, which appeared last month, verbally endorsed the axiom that British colonialism was essentially racist, while substantively undermining it. This was composed by the Special Committee to Review Historical Inequalities in Commemoration, which had been set up by the Commonwealth War Graves Commission. It revealed that up to 54,000 Indians and Africans who died in the service of the British Empire during the First World War had been commemorated “unequally”, and at least a further 116,000 had not been commemorated either by name or at all.

The report itself attributed the unequal treatment ultimately to “imperial ideology”, that is, “the entrenched prejudices, preconceptions and pervasive racism of contemporary imperial attitudes”. The fateful phrase “pervasive racism” was then picked up and broadcast by the press from the Guardian to the Times, and by television stations such as the BBC and Al Jazeera. Asked to comment, historian David Olusoga provocatively summarised what the report had discovered as “apartheid in death”. Casual onlookers could readily be forgiven for walking away confirmed in their conviction that British colonialism was essentially racist, and that the sooner the British “decolonise” themselves, the better.

Yet closer inspection reveals a very different story. The report makes clear that the Imperial War Graves Commission (as it was known then) was committed to the principle of the equal treatment of all the Empire’s fallen troops in the commemoration of their sacrifice, whatever the colour of their skin. Writing in 1926, the Commission’s founder, Fabian Ware, was unequivocal in stating that “all the soldiers of the Empire should be treated alike”. The report also makes clear that this principle was consistently realised in Europe, something which can easily be confirmed by a visit to the Menin Gate, where the names of Indians with no known grave join those of fallen British comrades cascading down the walls; or to the cemetery at Noyelles-sur-Mer, where the burials of members of the Chinese Labour Corps are marked by individual headstones, just like those of British soldiers elsewhere.

Outside Europe, however, this egalitarian policy was sometimes compromised. Many Indian and African casualties were commemorated, not with individually marked graves, but collectively with their names inscribed on memorials or, if missing, in memorial registers. Other, mainly East African and Egyptian personnel, received no commemoration by name and perhaps none at all. This deviation from the norm in Europe, the Commission’s report tells us, was due to “problems largely born out of distance, communication, local conditions, and on-going instability”.

Practical obstacles, however, were not always the reason for unequal treatment. There was also the view that, since most of the African dead came from peoples that were not accustomed to burying the deceased and so would not appreciate marked graves, they should be commemorated on collective memorials. Thus, F. G. Guggisberg, Governor of what is now Ghana said in May 1923 that “the average native of the Gold Coast would not understand or appreciate a headstone”.

The report’s comment on this and similar perceptions is stern: “Sweeping judgements such as these, which chose to ignore the intricacies of faith, culture, and customs in Africa outside Christian and Islamic traditions, played a significant role in shaping the IWGC policies that led to unequal treatment”. Worse, they were not just innocently sweeping, for their failure to do justice to cultural particularities was rooted in an “overarching imperial ideology” that was based on ideals of progress and civilisation that generated hierarchies of race and religion. Here, then, is where “pervasive racism” is supposed to appear.

Yet, it is notable that the report does not actually say that the views of the officials were empirically mistaken. That was wise, since it seems that the authors had not read any authority on the funerary customs of Africans — no such work appears in the report’s Select Bibliography. In fact, the ethnography of the period indicated that African peoples did often eschew burying their dead in marked graves. As reported in Volume IV of the 1911 edition of James Hastings’ classic Encyclopedia of Religion and Ethics, “the Masai, whose reason for not burying ordinary persons is said to be that the bodies would poison the soil, bury [only] their medicine-men and rich men”, while “some African tribes, as the Latuka and the Wadjagga, leave the slain warrior unburied”. Another group, “the Barotse … bury in secret, from which we may probably infer that the object is to leave no clue as to the burial place lest it be violated by wizards”.

Whereas the Commission’s report is quick to attribute the colonial officials’ view of African burial customs to imperial disdain for “primitive” peoples, in fact it might well have been born of close attention to them in the form of ethnographic research and direct experience. In their African colonies the British were so thin on the ground that their rule was only sustainable by persuading native peoples to cooperate. But in order to be persuasive, the British had to make themselves well-informed. For sure, African custom varied a lot over a vast continent, but if the quoted colonial officials were in fact mistaken about the burial customs of their war-dead, the report has not shown it.

However, allegedly ignorant claims by colonial officials about African burial customs are not the only evidence of the “pervasive racism” that the report claims to have exposed. Lying beneath them are the theoretical “hierarchies of race and religion that underpinned empire”. It is clear that the officials did regard the cultures of many African peoples as “primitive”. But I doubt they deserve blame for that, since — whether in terms of science, technology or medicine — African cultures were, compared to European ones, obviously underdeveloped in the 1920s. Moreover, when it came to deciding to commemorate the wartime sacrifice of native Africans collectively rather than with individual headstones, the reason was often respect for native custom, rather than disdain for it.

Further still, it is most remarkable that discrimination was usually religious rather than racial. Thus, the IWGC regarded non-white members of the West India Regiment, the British West Indies Regiment, and South African units as Europeans, because they were presumed to be Christian (or Muslim) monotheists, according them individually named commemoration wherever possible.

Divergence from the norm in Europe because of serious practical difficulties or out of deference to native religious custom was not racist at all. What would have been racist is the differential commemoration of African or Indian dead because they were regarded as less worthy than their British or European counterparts simply on account of their ethnicity or race. Did that occur? The report does not present much unequivocal evidence of this, but it does present some. So, for example, at the Beira Christian cemetery in Portuguese East Africa, the graves of eighteen named native African soldiers were intentionally left unmarked — since the deceased were to be commemorated on the nameless Dar es Salaam African Memorial — while the graves of white South Africans and Europeans now remain.

In sum, then, what the Commission’s report actually shows is this. Operating out of the metropolitan heart of the British Empire, the IWGC was committed to the racially egalitarian policy of commemorating all the fallen soldiers of the Empire alike. This it did consistently in Europe, marking the known graves of individuals while naming those with no known grave on collective memorials, regardless of their race. Outside of Europe this policy was sometimes adjusted out of practical necessity or respect for native religious custom, with good moral justification. In certain cases, it seems to have been unjustifiably compromised by racist preference for Europeans. That was lamentable, but it does not add up to evidence of pervasive — far less, systematic — “apartheid in death”.

Parts of the report confirms this conclusion. To assert the success of the policy of equal commemoration in Europe, it tells us, “is not to say that it was only there that the IWGC realised this goal or where it worked to make it a reality”. As for those occasions when it was set aside, it comments that “[i]n many ways it is understandable that IWGC operations during and following the First World War were not perfect”.

However, the report never quite manages to bring into clear focus the truth that not all inequalities are unjust — and that it pays no less respect to African or Indian fallen who would have received a headstone in northern France, to deny it to them in Africa or the Middle East, not because of their skin colour, but because of the dangerous remoteness of where they fell and were originally buried or out of deference to what was believed to be native custom. Because of its unresolved confusion on this ethical point, the report insinuates guilt where it should not, as when it writes that the IWGC was “complicit” in decisions that compromised its principles and treated the dead unequally.

When, to this ethical confusion is added the axiom of post-colonialist theory that the British Empire was informed by a single “imperial ideology”, which involved thinking of race and religion in terms of a fixed hierarchy of (white) superiority and (non-white) inferiority, the judgement is reached that the IWGC’s inequalities of commemoration were ultimately attributable to “pervasive racism”. Except that, as we have seen, that is not what the data says. So, this judgement does not follow from the evidence; it precedes it, and in doing so it brings with it its own, 21st-century, prejudice.