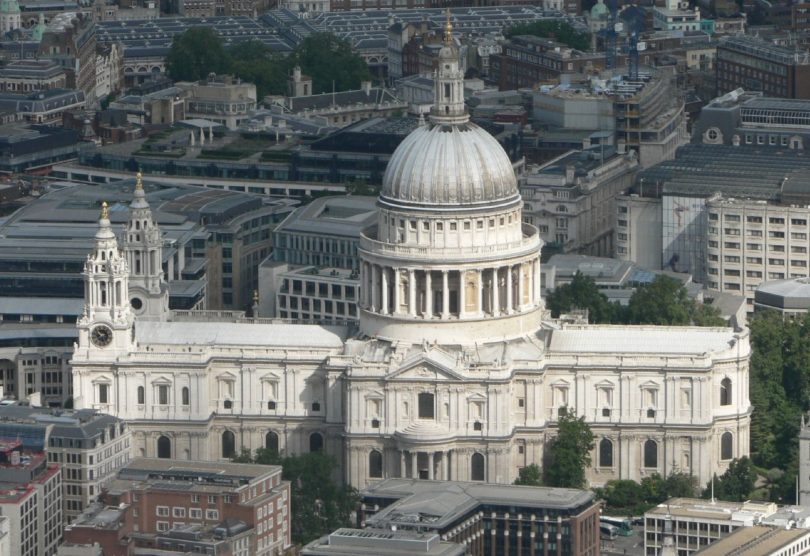 This is the headline that you will not read on the BBC news site or the Cathedral’s own website, but nevertheless, it is accurate.

The Church of England, our national church, while it publicly contemplates removing memorials to long-dead Englishmen whom it considers guilty of inhumanity, has just installed what it calls “a bold new artwork” — a huge (12 feet tall) garish monument to the ruler of the African kingdom of Benin, Oba Ovonramwen, who was deposed by a British expedition in 1897.  It has been placed in the Nelson Chamber of the Cathedral’s Crypt, near a small commemorative plaque to Admiral Sir Harry Rawson, who led the expedition, presumably as a reproach.

The Dean of St Paul’s, the Very Reverend Dr David Ison, says “When they visit St Paul’s, many people are struck by the vast number of monuments and memorials to past figures … the installation of Victor Ehikhamenor’s artwork contributes to the ongoing task of understanding the complexities of these monuments in 21st-century Britain.”

“Sometimes we have to remind people that [atrocities] happened,” says the artist, Victor Ehikhamenor.  But only some atrocities, it seems.

Benin, ruled by its obas, was a slave raiding and slave trading society.  It was notorious for its ruthless cruelty towards the weak, including those it enslaved.  It frequently practised human sacrifice.  Slaves were regularly buried alive or horribly butchered.  Soon after the arrival of Rawson’s expedition in February 1897, slaves were freed and slave trading in Benin City prohibited.

“This is me reawakening Oba Ovonramwen and every other person that was violated during that oppressive attack on the Benin Kingdom,” said Victor Ehikhamenor.  The Church of England is thus honouring the slave-owners and dishonouring the liberators of slaves.

And the enslaved people whose lives and freedom were won, and who hastened to Benin city after Rawson’s arrival?  They appear to be as insignificant to those in power today as they were in the days when Ovonramwen ruled by terror.

“There is something very powerful about seeing an oba standing there next to the panel memorialising the Benin campaign,” the cathedral’s chancellor, Dr Paula Gooder, told the BBC.  Indeed there is, though ‘powerful’ is not the word I would have chosen: scandalous, insulting, provocative …

By what religious or secular morality can a display deliberately glorifying a slaver be permissible?  Perhaps the Chancellor, Dr Gooder, or the Dean, Dr Ison, would tell us.