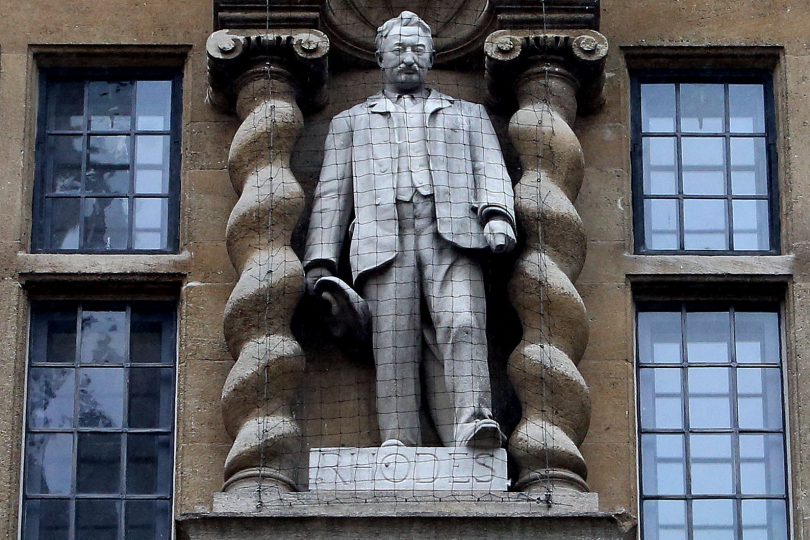 In accord with the government’s preferred policy of ‘retain and explain’ in dealing with controversial monuments, Oriel College has displayed an ‘explanation’ of Cecil Rhodes which we believe is incomplete and misleading. After consultation among experts, we offer this text to the College as it seeks a permanent resolution to its long dispute over Rhodes and his benefaction to Oxford:

Controversial in his own time, Rhodes had made his money largely through diamond mining in South Africa. Inspired by a widely shared vision of the British Empire as a force for global progress, he invested his profits in the building of railways and agricultural development in southern Africa, and in a (posthumous) scheme for Rhodes Scholarships to be awarded regardless of ‘race’.

As an MP in the parliament of the Cape Colony, Rhodes supported the restriction of the voting rights of black Africans on two occasions. In 1899, however, he opposed an attempt at the virtual abolition of the African franchise. He also supported the foundation of Izwi Labantu, the newspaper of a forerunner of the African National Congress, as well as the cause of Irish Home Rule.

In Rhodesia (now Zimbabwe) in 1896, misrule by Rhodes’ British South Africa Company provoked the Ndebele and Shona peoples into violent rebellion, in which thousands of Africans and hundreds of settlers died. Rhodes initiated peace talks to bring the conflict to an end, bought back settlers’ land for Africans to farm, and committed himself to reconciling black and white in South Africa.

When Rhodes died, the leaders of the Ndebele granted him a royal salute never given to a European before or since, and undertook to tend his grave. Five years later the first black (African-American) Rhodes Scholar was appointed: Alain LeRoy Locke (1885-1954), the philosophical architect of the intellectual and cultural revival known as `The Harlem Renaissance’.”