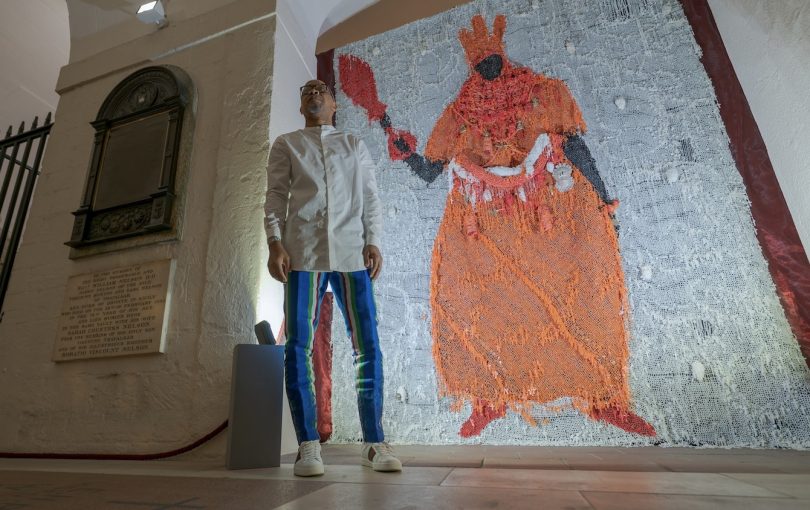 The Church of England, and other national institutions, express determination to root out or stigmatise individuals connected with the slave trade or slavery. So how did St Paul’s Cathedral, aided by two universities and a leading charity, acquire a new art work celebrating a brutal slave trader? Here are some answers.

Readers may recall that I have previously written about the work of art honouring the slave-trading and slave-owning Oba Ovonramwen of Benin, exhibited until recently in the crypt of St Paul’s Cathedral.

So extraordinary did this commemoration seem, given the Church’s much trumpeted policy of removing monuments to people involved in the slave trade, that I decided to use the Freedom of Information Act to try to discover how and by whom this was decided, and what discussion took place—if any—on the ethics of the display.  The Church is not subject to the Act, but Universities are, and the information they disclosed is sufficient to retrace the decision.

The idea originated with Professor Jason Edwards, at the University of York, who specializes in the sculptures at St Paul’s Cathedral, British art in its global and imperial contexts, queer theory, critical animal studies and vegan theory.  He leads a project called 50 Monuments in 50 Voices at St Paul’s.  In the University’s own words:

“The project is part of a larger, three-year, £1 million, UK Research Institute interpretation scheme at the Cathedral, Pantheons: Sculpture at St Paul’s Cathedral, c.1796-1916 which represents a partnership between St Paul’s and the University of York. The project has been doubly galvanised by both the global Black Lives Matter movement and the Government’s decision that the most appropriate course of action public institutions should take in relation to their collections is to ‘Retain and Explain’ them.”

Professor Edwards approached the Pitt Rivers Museum in Oxford.  Although the FOI information Oxford has provided has individual names obliterated, we know from the University of York (less assiduous in blanking out) that the person concerned was Professor Dan Hicks, a Curator at the Pitt Rivers, and Professor of Contemporary Archaeology.  He seems to have something of an idée fixe concerning Benin, about which we have written before.  Professor Edwards wrote:

“This is where you come in. We’d like to invite you to respond, in any way you choose, to the Army and Navy Company’s monument to Arthur Blyford Thruston (1897-1899) [sic], who, as you may know, is one of the key players in the burning and looting of Benin City. Your response might be in the form of a written text, something historical, academic, or interpretive, but it could just as easily be a poem, a song, a piece of art, an autobiographical or personal reflection or meditation, whatever it is that the monument inspires in you. Indeed, the only real criteria are that whatever you produce should be fairly media-friendly and accessible, so something an average viewer, listener, or reader could engage with in a couple of minutes. We don’t want to be prescriptive, we want this to be about your relationship with your monument.”

It would seem that Professor Edwards may not be quite expert on this subject, as he misidentifies Admiral Sir Harry Holdsworth Rawson; anyway, he was happy to leave it all to Professor Hicks.  It was the latter’s idea to initiate a much more elaborate and expensive project: a large work by an artist named Victor Ehikhamenor, described on his Wikipedia page as “a Nigerian visual artist, writer, and photographer known for his expansive works that engage with multinational cultural heritage and postcolonial socioeconomics of contemporary black lives.”  The original suggestion was that the proposed work should cover up the Rawson monument completely.  As Professor Hicks saw it, “a temporary shroud does open up the possibility of remembering the tens of thousands killed in Benin in 1897 (and the more than ten thousand sacred artworks desecrated and looted) as some balance after a century of remembering Admiral Rawson.”  We have previously criticised Professor Hicks’s cavalier and inaccurate portrayal of the 1897 expedition.

Covering up the Rawson memorial seems to have been the only thing the Cathedral authorities thought “problematic”, as otherwise they were keen to go ahead, as long as they were not required to pay.  But Professor Hicks offered to raise the necessary money.  As Mr Simon Carter, Head of Collections at St Paul’s, informed Professor Hicks:

“The cathedral’s senior leadership team has approved the proposal to pursue an art work by to be displayed in the crypt adjacent to the Rawson memorial for the 125th anniversary of the looting of Benin City as part of the #Voices project. Covering the monument would be problematic here, in terms of the extent of intervention and the permissions required, so we will need to investigate a work which could be juxtaposed to it. The location of the monument is slightly awkward but there are plenty of possibilities. I believe the next steps will be for you to contact to explore whether [the artist] wishes to participate, and ascertain his costs. We will need to collaborate on the project budget in case there are any costs at this end before you seek funds, and if you and he wish to visit I am happy to facilitate as soon as possible.”  It is hardly necessary to point out that Mr Carter seems not in the least troubled by the subject of the art work, and subscribes uncritically to the tendentious interpretation of the 1897 expedition as looting.

The Cathedral was not suggesting a discreet display.  On the contrary: “the proposed location would be visible from the Nelson chamber, the most visited part of the crypt, and would therefore be seen by the vast majority of our visitors.”  This was fortunate, as Professor Hicks and Mr Ehikhamenor wanted “something big”, which would make the work more attractive to potential buyers after the Cathedral display came to an end.  The authorities were happy to oblige: “There is still scope for the work to be a good size – there is an aperture to the right of the monument which is 9 feet 7 inches (to the top of the string course) by 8 feet 3 inches wide, which provides a possible place to hang the work. I’m sorry a larger scale isn’t possible”.

The work was to be an effigy in red beads, entitled Still Standing.  According to the artist, “This is me reawakening Oba Ovonramwen and every other person that was violated during that oppressive attack on the Benin Kingdom.”  Oppressive for whom?  The Nigerian historian Philip Igbafe observes that “a general emancipation of slaves followed in the wake of British occupation of Benin”.

Simon Carter pointed out that “As an art installation the response proposal does indeed leap cathedral committee boundaries so I have to circulate a proposal to some of my colleagues here before permission in principle can be achieved.”  The various St Paul’s committees apparently raised no objections, and indeed “The rosary Oba and the rationale for its display were very well received”.  In short, St Paul’s welcomed the apotheosis of a slave owner, and a reproach to those who had freed slaves.

The Dean of St Paul’s, the Very Reverend Dr David Ison, later explained that “When they visit St Paul’s, many people are struck by the vast number of monuments and memorials to past figures … the installation of Victor Ehikhamenor’s artwork contributes to the ongoing task of understanding the complexities of these monuments in 21st-century Britain.”  One might wonder what complexities were thus clarified.  Dr Ison may wish to explain.

The price of the bead-work effigy was £50,000, and an application for a grant to cover the full cost was made to the Art Fund.  This is the “national fundraising charity for art”, whose object is “to help protect and enrich the UK’s museum and gallery collections and to ensure as many people as possible can access and enjoy them.”  The Art Fund trustees seem to have discussed the application in some detail, to the extent of asking for sketches and examples of other work by the artist, but whether they considered the ethics of paying for a work glorifying a slave owner is unknown.  They did however make the necessary grant to acquire the work.

As a charity, the Art Fund is not subject to the Freedom of Information Act.  After a courteous exchange of emails, they decided not to provide me with information other than this statement:

“Art Fund … in 2021 committed £3.3m towards supporting museums, galleries and historic houses with grants for acquisitions. The charity has supported the acquisition by Pitt Rivers Museum of the artwork Still Standing by Victor Ehikhamenor.  Ehikamenor [sic] is one of West Africa’s leading contemporary artists and this acquisition represents the first time his work will enter a UK public collection.”

The Pitt Rivers Museum, at the prompting of Professor Hicks, was thus able to take possession of the work after its display at St Paul’s ended.  St Paul’s Cathedral press office reported that “Still Standing has been purchased by the Pitt Rivers Museum with generous support from Art Fund”.  The director of the museum, Professor Laura van Broekhoven, thought it “very exciting, and I find Victor’s work particularly powerful and agree it would be a brilliant acquisition”.

The University has informed us that “The subject of the artwork was not discussed by the University prior to commissioning and left to the discretion of the artist.”

It is a small world.  Professor van Broekhoven’s research interests include “repatriation and redress, with a focus on the importance of collaboration, inclusivity and reflexive inquiry.”  Professor Hicks has written a book entitled The Brutish Museums: The Benin Bronzes, Cultural Violence and Cultural Restitution.  Victor Ehikhamenor is a member of the Benin Dialogue Group and the Legacy Restoration Trust, which campaigns for the repossession of the objects confiscated in 1897.  The Pitt Rivers Museum has recently decided to return a large number of ‘Benin Bronzes’ to Benin, as have other Oxford and Cambridge museums.

What conclusions can we draw from the details of this episode?  There seem to me to be three that stand out.  First, the present government’s policy of “Retain and Explain” leaves itself open to manipulation by people wishing to put forward their own particular views, however disputable.  Second, the individuals actively involved were very few, and largely unaccountable: this seems to be a recurring pattern where so-called “contested heritage” is at issue.  The decisive figures in this instance seem to have been only two: Professor Hicks and Mr Ehikhamenor, both of whom had a strong personal commitment to a highly partial view of the Benin expedition of 1897.  Third, and in my view most important, the various individuals and bodies that had, or should have had, oversight seem merely to have rubber stamped the process: the University of York, the Pitt Rivers Museum, the Trustees of the Art Fund, and most extraordinary of all, the Dean and Chapter of St Paul’s Cathedral.

There is no sign in the documents supplied under FOI that any of these people raised the slightest concern over the ethics of this commemoration.  No one apparently turned a hair at the idea of glorifying in London’s cathedral a man who was an owner, a trader and a killer of African slaves.  I admit that I am at a loss to comprehend their intellectual processes or their moral compass.