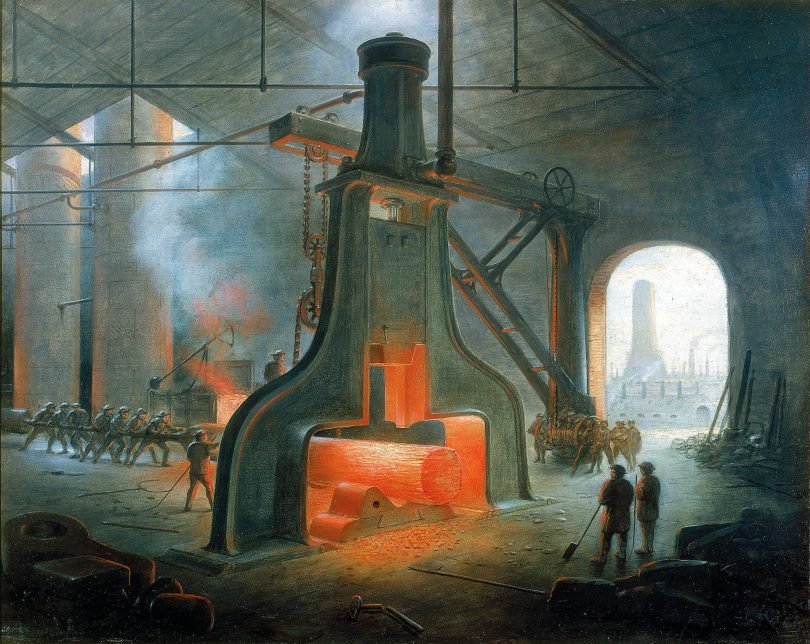 The Prime Minister recently suggested that we had some responsibility for global warming because we initiated the ‘Industrial Revolution’. This term has always been politically loaded. But was there really an ‘Industrial Revolution’ at all? And if not, what does this suggest about the idea of a ‘green’ equivalent today?

As late as 1940, C. R. Fay reported that one could ask any undergraduate being viva’d in Modern Greats “Who invented the term Industrial Revolution?” and be sure of getting the answer “Arnold Toynbee [1852–1883], who got it from Marx.”[2] Today the outcome would very likely be rather different, and one wonders whether many specialists could be relied upon to recall with even the superficial detail of Fay’s examinee the odd way in which this crucially important term has entered both academic and general discourse.

We seem to have forgotten that the term was originally employed by the French revolutionaries, and others, to describe their own hopes for an economic transformation to correspond with their political achievement, and indeed that it had at first nothing to do with England at all. We have largely forgotten that it was not until 1837 that the term was first applied to British economic history, by J.B. Say’s successor at the College de France, Jérôme-Adolphe Blanqui, writing in his Histoire d l’Economie Politique en Europe, expressed surprise that “revolution industrielle” had not occurred in France, as expected, but that something along those lines was clearly and paradoxically transpiring in England. We need to remember more precisely the reasons that Engels then adopted this reference from the French literature as a key term for his own discussion in The Condition of the Working Class in England (1845 in German, but not in English until 1885), passing the term on to Marx, who used it in Capital (1867 in German, English in 1887). And, finally, we should be crystal clear as to why it was adopted by the academic social campaigner Arnold Toynbee and enthusiastically publicised by his friends, pupils and followers, amongst which we can number the Master of Balliol, Benjamin Jowett, the imperial civil servant Alfred Milner, and the distinguished economic historians William Cunningham and William Ashley, to name only a few. To varying degrees all shared Toynbee’s vigorous political interest in liberal, Christian social reform, and so had particular reasons to find a revolution in the history of the industrial development of Britain. Only then will we understand how, paradoxically, it has also become a totem of the right. As J. C. D. Clark has suggested, the origins and development of this term are a pregnant question:

Since Englishmen in the old society (who knew their business better than we know it) did not adopt the category ‘Industrial Revolution’, it becomes an historical and not merely a semantic question why that category was imposed upon them.[3]

Briefly, the answer is that the use of the words “Industrial Revolution” in application to British history was a highly tendentious mid to late nineteenth century imposition and part of several active political programs, that of Engels and Marx and the Fabians after them (the term is a key term in Sidney Webb’s contribution to Fabian Essays, 1889) and also of moral campaigners such as Toynbee who were only ambiguously socialist in their views.

Indeed, examination of the literature indicates that, slight and unfocused references in Mill (1848) and Jevons (1865) aside, the term “Industrial Revolution” has no significant statistical presence in English before Toynbee’s public lectures of the 1880s, collected as Lectures on the Industrial Revolution in England, in 1884.[4] After and because of the lectures and the book, it quite rapidly became commonplace. Indeed, one can track the penetration of the term in the various editions of William Cunningham’s standard academic history, The Growth of English Industry and Commerce. The first edition of that work appeared in one volume in 1882 and makes no reference to an Industrial Revolution, a fact that is all the more remarkable since Cunningham’s preface thanks Toynbee for his “valuable suggestions”.

However, the Second Edition of 1890 (volume 1) and 1892 (volume 2) is permeated throughout by Toynbee’s coinage, though Cunningham’s interpretation stops short of full submission to Toynbee’s argument, and by the Fourth Edition of 1907, the term Industrial Revolution was fully normalised, capitalised, and ubiquitous.

Then, in 1908 the Cambridge University Press decided to extract and “reprint the portions […] which deal with the revolution that occurred, both in town and country, during the eighteenth and the first half of the nineteenth century.” This single volume of just over five hundred pages was inexpensively produced for a wide readership and published under the new title of The Industrial Revolution, proving sufficiently popular to support reprints in 1917 and 1922.[5]

Significant in itself, the development of Cunningham’s history may be taken as an indicative landmark as well as a causal factor in the habilitation of the term Industrial Revolution, and though by no means the only indicator that Toynbee’s wording and the views that it implied were triumphing within the universities as well as in the outside world, it is certainly one of the most important. Cunningham was not only a fellow of Trinity College, Cambridge, but a prominent Churchman, becoming Archdeacon of Ely in 1907, as well as a founding fellow of the British Academy. Once again Marx and Engels had found via Toynbee support within the British establishment for a revolutionary history and historiography.

Yet, in spite of this rapid acquisition of dominance in public understanding, criticism was early, authoritative and accurate, Alfred Marshall, no less, rejecting in it in these terms in 1919:

England, afterwards incorporated in Britain, was at one time a pupil of other industrial lands; though she always had certain, rather narrow, specialities. In the course of a few centuries she became, first their competitor on even terms; and afterwards their leader in many great industries. The four or five decades, in which her leadership was chiefly developed, are sometimes described as those of the Industrial Revolution: but in fact what then happened was not a Revolution; it was merely one stage of Evolution which had proceeded almost without interruption for several hundred years.[6]

And this is no inconsequential, technical point. As Landes notes, “The abruptness of the social shock of industrialization” has “always been a staple of […] negative appraisal”.[7] Without the sudden character of the event the negative appraisal itself is thrown into question. Engels, Marx, Toynbee and many others subsequently have embraced the “Industrial Revolution” as an operational term because it describes a coup d’economie perpetrated by a selfishly liberal bourgeoisie seeking to evade moral responsibility by, and I used Maine’s terms advisedly, replacing stable status arrangements with free contract. The sharp temporal focus implied by term “Revolution” permits the clear and sometimes personal identification of winner and loser, of robber (baron) and victim, and much, perhaps all, of the guilt-inducing rhetorical and emotional power of the Engelo-Toynbeean argument would evaporate if the ills to which they were pointing, and insofar as those ills are demonstrable, are ascribed to a gradual process stretching back several centuries, involving a much larger number of agents, most lost in the fog of history, and each individually carrying only a fractional share of blame. Such a view would prevent the construction of a spurious melodrama, with one, top-hatted, class driving another from the door without a penny.

Furthermore, by reminding ourselves of Toynbee’s importance as a conduit for Marxist history, we also become acutely aware of his contribution to embedding Marxist historiography in the assumptions of even the most determinedly anti-Marxist thinkers, Sir Keith Joseph for example, whose “new entrepreneurial version of the great Industrial Revolution myth” was rightly mocked by D. C. Coleman.[8] However, it was mocked in vain, for the assumption that history and particularly economic and technological history is the record of a series of discontinuities, or revolutions and rapid changes, has if anything become more widespread rather than less, resulting not only in the over-diagnosis of historical discontinuities but false and misleading expectations with regard to future Great Leaps Forward. If there was a first Industrial Revolution then we may, with confidence, expect other discontinuities as and when they are most needed, the currently longed-for “Green Industrial Revolution” for example. If, on the other hand, the “English Industrial Revolution” is the artefact of a tendentious political and moral programme, and with little or no basis in socio-economic data, then we should be bracing ourselves for immediate disappointment followed by a very long and uncertain wait.

[1] This article summarises a few of the findings of a longer study, Misconceptions of the “Industrial Revolution”, presented to the Mont Pelerin Society meeting of 2021 in Universidad Francisco Marroquin, Guatemala City.