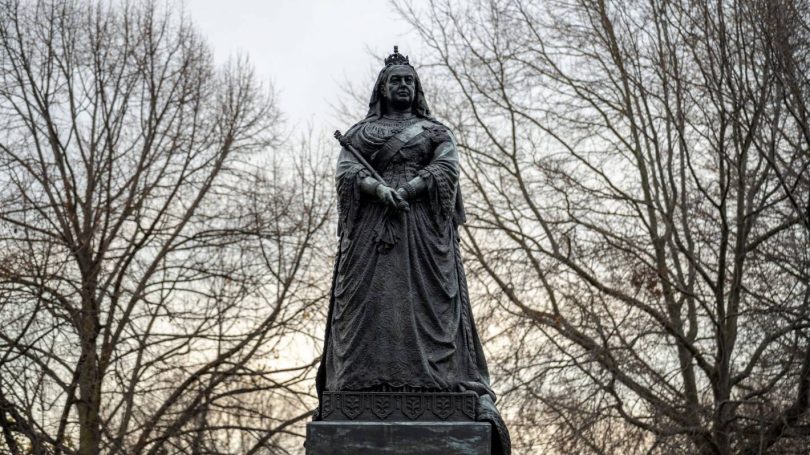 This article tells the story of the Queen Victoria memorial in Ohinemutu, New Zealand. Presented to loyalist Māori shortly after the New Zealand Wars, it comprised a wooden portrait, and eventually a support post and canopy, carved by local practitioners in the early 1900s. It constitutes a distinctive, indeed unique memorial to a much-loved Queen and Empress that deserves to be a far better known artefact which challenges stereotyped beliefs about colonialism and indigenous subjection. 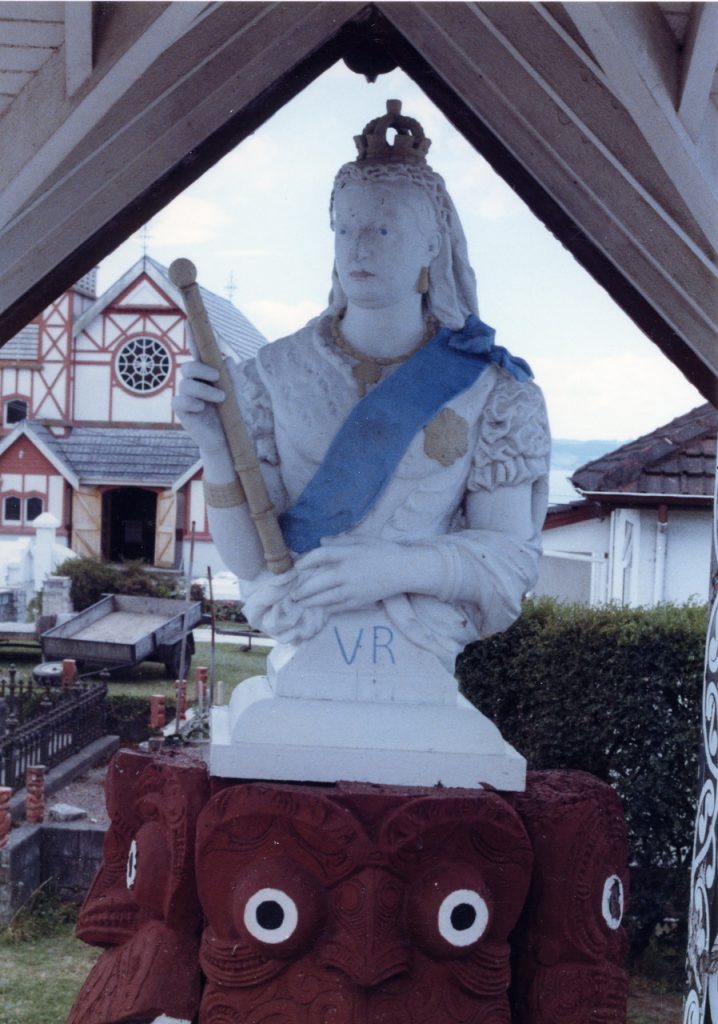 The Ohinemutu Queen Victoria is unique: she is remarkable enough for being sculpted in middle age – the vast majority of her statuary dates from the Golden Jubilee (1887) to the mid-1900s. She is in neither marble nor bronze but is carved from wood – by an unknown Italian hand – a material which has a particular Māori resonance. She is bigger than a bust but smaller than a statue. And for much of her history, she was spectacularly housed, firstly in a wharenui (meeting house) and then on a specially carved post, underneath a canopy.

Her origins are in the colonial government’s ‘thank you’ to the Arawa confederation, and particularly the Ngāti Whakaue iwi (tribe), whose epicentre is Ohinemutu. Not only were they colonial allies in the later New Zealand Wars (1860–72), but they hosted the first New Zealand royal visitor, Prince Alfred, Duke of Edinburgh, whose horsemanship, canoe paddling and not least his kilt (akin to the Māori piupiu) made him a huge hit. The promise of a sculpture of his mother was made on his behalf.

It took time to reach Ohinemutu – for several years it gathered dust in the parliamentary library in Wellington, a repository for miscellaneous artefacts. Following understandable Ngāti Whakaue pressure, strongly supported by Native Affairs Minister John Bryce who has gone down in history as a racist ‘baddie’, the Queen was unveiled by the governor, Sir William Jervois, in 1884.

The Queen’s first Ohinemutu home, inside the great wharenui Tamatekapua, appalled the sensibilities of puritanical Pākehā (European) New Zealanders as she was ‘placed among the obscene Maori carvings’. But she was honoured: for the 1885 Christmas dinner she was adorned with bouquets and a greenstone hei-tiki pendant was suspended around her neck. Our hosts hoped ‘Her Majesty would know of their proceedings that day’; if she did, that contrary to the cliché, she surely would have been amused – and touched. 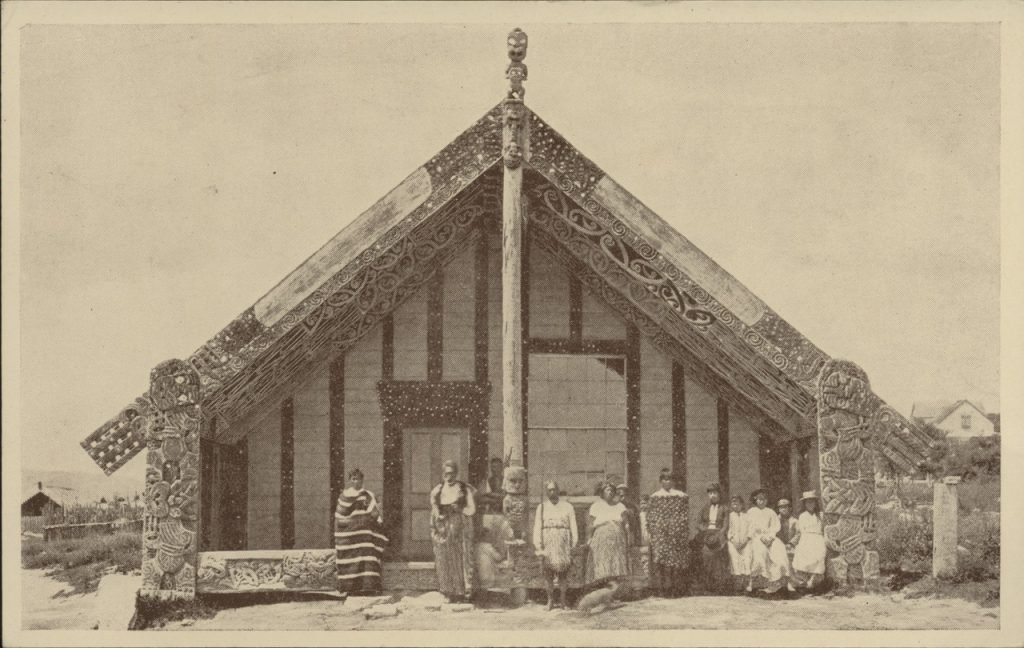 The construction of a new wharenui meant Victoria was relocated in 1900 to an open-air setting on the surrounding marae (communal and sacred space). A special post and canopy were made for her. The former bristled with teeth-bared corbel masks, while the latter was a more elegant structure by the celebrated Tene Waitere, the Michelangelo of Māori carving, perhaps. Documentation of the recent Diamond Jubilee celebrations also suggests that Ohinemutu locals wished to do their bit too. Although it eventually yielded to the more standard dark red, white and blue-black, the post was originally black. Ngāti Whakaue explained to the visiting Dowager Countess of Sutherland: ‘We paint it black for the great Queen, our white mother, constantly mourns and weeps for her braves who have fallen in South Africa, and we too mourn for our brothers lying under the sod for the cause of freedom and for our great nation’. The Queen replied to this message with her ‘gracious thanks for the devoted loyalty shown by the Maoris.’ She was ‘much touched by their feeling for her in the very many sorrows and anxieties which this sad year has brought.’ She added: ‘Tell my dear Maori subjects how I love them. I am proud of their sympathy and devotion’. This was dated 1 December 1900. Seven weeks later Queen Victoria was dead. 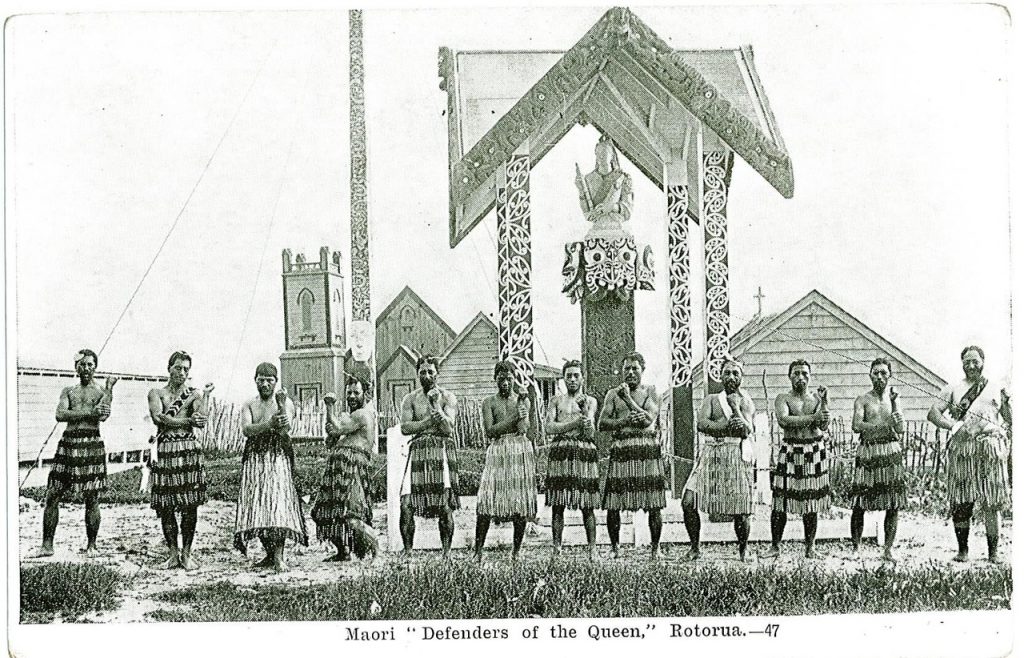 While – to talk the talk – the Ohinemutu Queen Victoria is a potent signifier of integrated acculturation and hybridity, here it takes a ‘loyalist’ form not necessarily congenial to postcolonial orthodoxy. But even more obviously, it is triumphantly indigenous. Ngāti Whakaue proved themselves readily and selectively capable of borrowing material culture and ideas that were compatible with and adaptable to their own, ever-changing world. Indeed, the new memorial represented a singular appropriation of that supposedly most imperialist of cultural forms – the public sculpture of a monarch and empress: Queen Victoria now became ‘Kuini Wikitoria’, Ngāti Whakaue’s beloved and revered ‘white mother’, protected and supported by her infrastructure.

The coda to this remarkable story is unquestionably sad. For almost a century, the memorial remained largely intact, although the sculpture received numerous patriotic paint jobs. Then, in 1995, Victoria was effectively kidnapped: wrenched from her pedestal by activists in moves that paralleled the earlier decapitation of Sir George Grey’s statue in Auckland. The Rev. Wihapi Te Amohau Winiata, invoking his role as a priest, carver and rangatira (chief), passionately appealed for the carving’s return. He refrained from pronouncing a makutu or curse (that wouldn’t have been Anglican) but warned those responsible that bad karma would otherwise emanate. Sure enough, Victoria reappeared as mysteriously as she had disappeared eight months previously, deposited on the nearby doorstep of Te Ao Mārama church hall, sans crown but with a damaged arm. 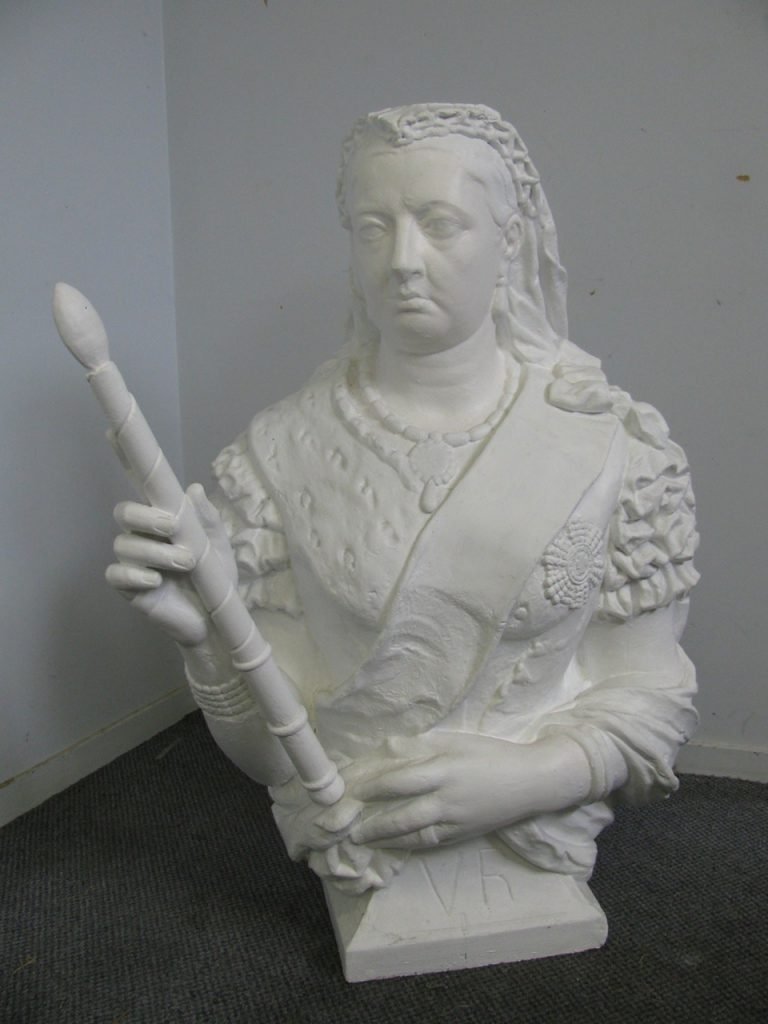 Although professional restoration and reinstatement was initially proposed and the arm was repaired, security concerns and perhaps a dolce far niente mindset have meant that the carving languished for many years in the basement of the Whakaturia dining room complex. Periodically however, as on the occasion of Prince Andrew’s visit in 2007, Victoria was removed and temporarily reaffixed to her pedestal.

What next? My discussions in 2013 with Ngāti Whakaue kaitiaki (curators and custodians), revealed understandable dissatisfaction about the ‘empty plinth’. My suggestion that the hallowed precedent of Michelangelo’s David should be considered and a crowned replica in bronze or resin of the Queen substituted, with the original restored according to current ‘best practice’ and housed in a suitable museum, was noted. We can surely compare the quotations of Giorgio Vasari on David (who had ‘protected his people and governed them justly’) and Te Arawa political leader Sir James Carroll on Queen Victoria (‘the guardian of our rights and liberties’). But in the event, this wasn’t followed and sadly the sculpture became the symbol of intense Ohinemutu politics where family rivalries compare with those of the Montagues and Capulets. In 2018, a garishly painted Queen Victoria, with brown hair and blue eyes, was given a new crown and placed once more on top of her post, though with part of her base missing. I wish I could be happier. To me her former mana (the Maori word for a combination of charisma, prestige and spiritual power) has been gravely compromised, and she now resembles a relation of Cecilia Giménez’s notorious Ecce Homo restoration. But who am I to comment other than to observe that her current condition, subject to an object conservator’s analysis and a change in the balance of power in Ohinemutu politics, is very likely reversible and something of her mana therefore potentially retrievable?