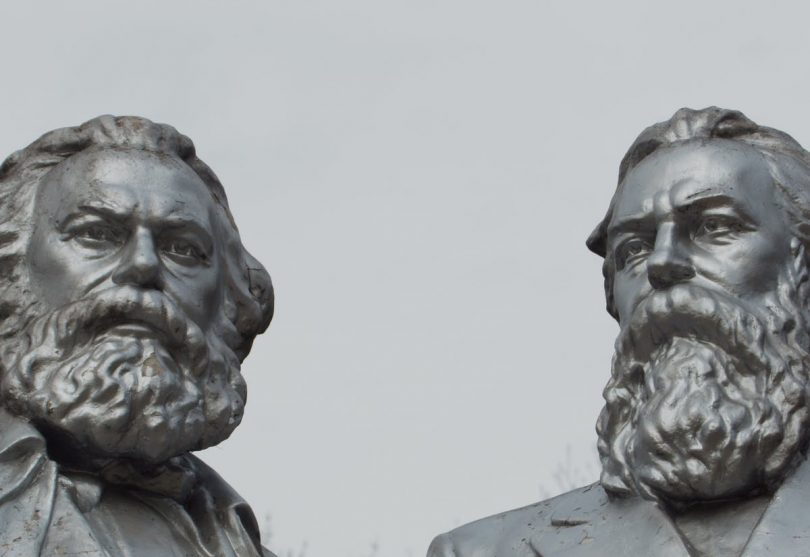 If a hint of support for racism, imperial conquest and genocide are sufficient reason for ‘cancelling’ historical figures, can Karl Marx and Friedrich Engels long escape?

To believe in the superiority of certain races and the consequent subjugation and even elimination of inferior races is rightly regarded as monstrous.  Those suspected of holding and publicly expressing such beliefs—even at a time when they were not uncommon and if the horrifying consequences were still largely theoretical—are now considered beyond the pale.  Many want their traces expunged from the public space, and their writings excluded from academic syllabuses.

Few eminent thinkers are more objectionable in this respect than Karl Marx and Friedrich Engels.  Moreover, few philosophers have had a greater political impact: as Marx put it, the aim was not merely to understand the world, but to change it.  Yet their works are widely taught in universities, and their ideas are still taken seriously as social and political analyses, and even as guides to political action by many who regard themselves as in the progressive avant-garde.

Their open advocacy of cultural genocide was particularly strident during and after the 1848 revolutions, when conflicting national and ethnic claims became central issues in European politics.  This was, wrote Engels, a conflict of ‘civilization against barbarism’.[1]  It was essential to prevent ‘the civilized West’ from being subjugated by ‘the barbarian East’.[2]  Small ‘degenerated’ ethnic groups—‘ruined fragments of peoples’ such as Bretons, Basques, Scottish Gaelic speakers and most Slavs, were rightly ‘destined to perish’.[3]  Even larger nations such as the Poles ‘are done for’: ‘let them stew in their own juice, send them into battle, gobble bare their land, fob them off with promises.’[4]

In Marx’s newspaper, Engels gleefully anticipated ‘a general war’ which would ‘wipe out these petty hidebound nations, down to their very names. The next world war will result in the disappearance from the face of the earth not only of reactionary classes and dynasties, but also of entire reactionary peoples.  And that, too, is a step forward.’[5]

Until that cataclysmic solution, they advocated the political and cultural domination and elimination of lesser nations by greater nations, principally Germany and Hungary, which were seen as forces for progress.  Further east, progress was in the hands of the Russians advancing into Asia—for if Russia was reactionary and backward in civilized Europe, it was ‘progressive’ as a colonial power among lesser breeds.  ‘Russian rule, for all its infamy, all its Slavic dirtiness, is civilising for the Black and Caspian Seas and Central Asia, for the Bashkirs and Tatars.’[6]

Given their acceptance of the progressive consequences of German and even Russian imperialism, Marx and Engels took a relatively favourable view of Anglo-Saxon expansion too, or at least condoned it as historically desirable.  America’s aggressive war with Mexico was ‘in the interest of civilization’, as ‘lazy Mexicans’ were displaced by ‘energetic Yankees’: what were independence and justice compared to ‘facts of world-historic significance’[7]  British rule in India, although condemned for cruelty and rapacity (Britain was seen negatively as a defender of the European status quo), was still historically progressive compared with the alternatives.  Much worse to have

India conquered by the Turk, by the Persian, by the Russian, to India conquered by the Briton. England has to fulfil a double mission in India: one destructive, the other regenerating: the annihilation of old Asiatic society, and the laying the material foundations of Western society in Asia.[8]

One can hardly imagine a more brutal justification of colonialism.  Such stark ideas about historical progress through ethnic conflict extended to belief in inherited superiority and inferiority of races—what Engels called ‘accumulated inheritance’: ‘among us, mathematical axioms seem self-evident to every eight-year-old child … It would be difficult to teach them … to a bushman or Australian Negro.’[9]

The championing by Marx and Engels of progress by violence, their airy support for cultural and even physical genocide, and their condoning of European imperialism were all publicly expressed and pored over reverently by generations of revolutionaries.  It has even been suggested that they were the first to create a political movement that included genocide within its utopian conception of progress.

Of course, History Reclaimed does not advocate ‘cancellation’ or ‘decolonization’ of historically important thinkers, nor the vandalization of Marx’s memorial in Highgate Cemetery.  It is necessary, we believe, to study and understand the most loathsome ideas.  But we are struck by the double standards of those who attack Hume or Huxley while being perfectly happy with Marx and Engels.