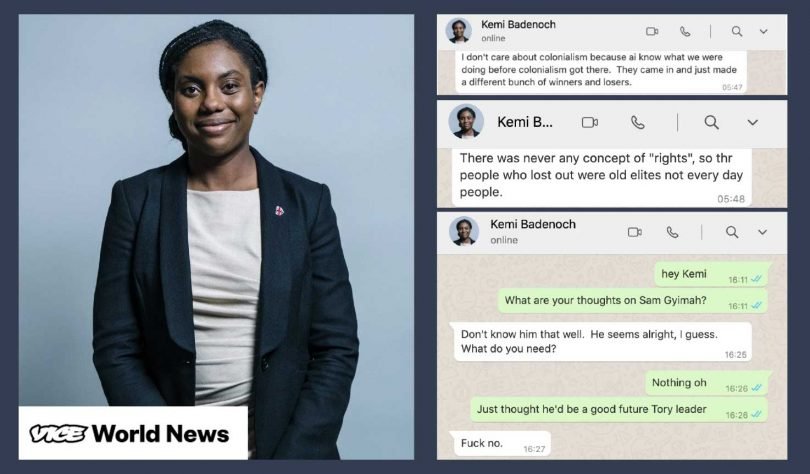 History Reclaimed opposes the abuse of history for political purposes. Here is an excellent example of what we mean. Kemi Badenoch MP has been attacked for a comment she made about colonialism. But she is right, and this is why. She has a far better grasp of history than her critics.

Vice article can be found here.

Kemi Badenoch, newly appointed Minister for Levelling Up, has come under attack for an off-hand remark she made on colonialism. In a leaked WhatsApp exchange, according to VICE World News, Badenoch wrote, ‘I don’t care about colonialism because [I] know what we were doing before colonialism got there. They came in and just made a different bunch of winners and losers … There was never any concept of “rights”, so [the] people who lost out were old elites not every day people.’

On this, the VICE reporter commented that, ‘The British Empire and its European counterparts believed in the superiority of white people, and indigenous groups experienced extreme exclusion, displacement and violence in order for the British to take control.’ And the source of the leak, Funmi Adebayo, founding CEO of the Black Monologues, justified sharing the messages by arguing that someone ‘with this level of ignorance, who doesn’t understand the history’ shouldn’t be given responsibility for managing international relations, given Badenoch’s additional Foreign Office portfolio.  Regrettably, the Labour Party called Badenoch’s comments ‘crass, divisive and painfully inaccurate.’

In fact, Badenoch has a far better grasp of history than her critics. She is clearly referring to the fact that centuries before European colonisers arrived, Africans were enslaving other Africans, mostly by capturing them in wars and raids, and sometimes taking them instead of debt. Often slaves were destined for profitable export, first to Roman markets and then to Arab ones. But they also had their local uses, which included supplying victims for human sacrifices. Such sacrifices served a variety of purposes: sometimes to appease the gods, but more often to supply a deceased master with servants in the afterlife, to make a conspicuous display of extravagant wealth, and to intimidate onlookers. Although wives, favourites, women, and foreigners were liable to serve as victims, slaves were the main source. Commonly, their fate was to be buried alive.

What’s more, while the British did follow Arabs and Africans into the slave trade, they were the first to repent of it — and of the ugly racism behind it. The British Empire was the first major power in the history of the world to abolish the slave trade and slavery in the name of a Christian conviction of the fundamental equality of all human races under God. In the last quarter of the 18th century, anti-slavery sentiment flourished widely among English Dissenters or Non-Conformists — especially the Quakers — and the Methodist or Evangelical wing of the Church of England. John Wesley prefaced his Thoughts upon Slavery (1774) with a quotation of the Book of Genesis: ‘And the Lord said — What hast thou done? The voice of thy brother’s blood crieth unto me from the ground.’ The context is Cain’s murder of his brother Abel and the implication is clear: African and Englishman, slave and master, are brothers, common children of the same God. This was the racially egalitarian view that triumphed in 1807 when the British parliament voted to abolish the slave trade throughout the Empire, and again in 1833, when it voted to abolish the institution of slavery altogether.

Then, from 1807 and throughout the second half of its existence until the 1960s, the Empire committed to suppressing the trade and its institution across the world — from Brazil, across Africa, to India and Malaysia. At one point, the Royal Navy was using more than 13 per cent of total manpower to suppressing slave trading between west Africa and the Americas. According to the American scholars of international relations Chaim Kaufmann and Robert Pape, Britain’s effort to suppress the Atlantic trade (alone) in 1807-67 was ‘the most expensive example [of costly international moral action] recorded in modern history.’

Badenoch is quite correct: the British did not invent slavery and Africans were deeply involved in it long before Europeans landed on their coasts. And sometimes when the British inflicted imperial violence on indigenous people, they did so in order to liberate indigenous slaves from indigenous slavers.

Nigel Biggar is Regius Professor of Moral and Pastoral Theology, and director of the McDonald Centre for Theology, Ethics, and Public Life, at the University of Oxford, where he runs the ‘Ethics and Empire’ project. He is on the editorial board of History Reclaimed.

This article was first published by Spectator Coffee House   https://www.spectator.co.uk/article/kemi-badenoch-is-right-about-colonialism