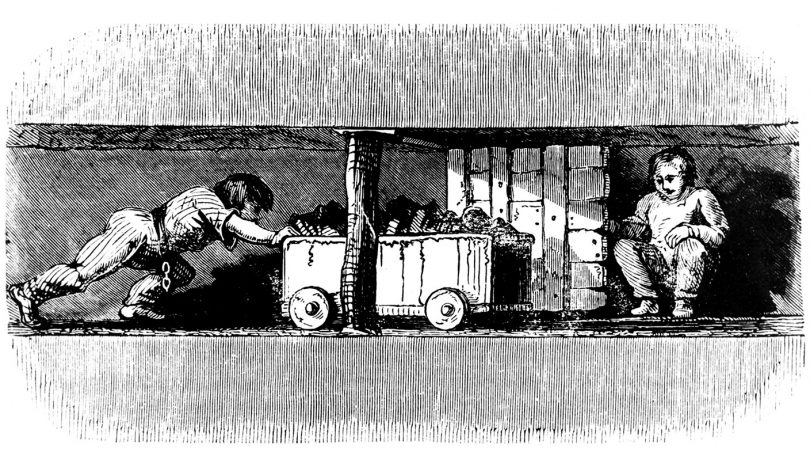 English Heritage describes the inventor Richard Arkwright as benefiting from slavery and exploited factory labour. But without the wealth created thanks to technological, organisational, economic and social changes such as those Arkwright pioneered, humanity’s lot on Earth could not have been substantially improved.

Describing the women he saw in 1787 between Füssen in Bavaria and Innsbruck in Austria, Adam Walker captured the toughness of manual work in the pre-industrial world:

‘I sincerely pity them. They are such slaves as I have heard the Negroes in the West Indies described. No uncommon sight to see them threshing corn, driving wagons, hoeing turnips, mending the highways.’

Such labour extended to children too.

In Britain, the increased demand for coal after 1750 led to the growing employment of women and children in mining, but many agricultural tasks had long been done by both. Child labour was not the product of Arkwright and industrialisation. Individual families had always coped with the problem of feeding children by defining childhood so that it included employment as far as possible and in so far as it was necessary, for example tending livestock.

Commentators approved of child labour, arguing that it prevented idleness and begging, educated children to useful employment, and accustomed them to work. Most families, however, needed no such encouragement; their problem was to find employment for the children and to feed them until they were able to work.

So English Heritage in adding factory labour to the benefits of slave labour in its assault on Sir Richard Arkwright, is both misrepresenting the consequences of industrialisation and presenting the latter in entirely negative and exploitative terms.

The ‘Industrial Revolution’ is not only our heritage, but also the word’s. Without the wealth created thanks to the technological, organisational, economic and social transformations described as the Industrial Revolution, it was not feasible to suggest that humanity’s lot on Earth could be substantially improved. Without economic growth, the secular philosophies of change and improvement were flawed, and it was not surprising that most radical thinkers were sceptical about the appeal of their views to the bulk of the population. Whatever their stated belief in the sovereignty of the people, it is not surprising that their imposed public virtue had only limited appeal. Besides being impractical, it was largely irrelevant to the problems of most people. The legislation issued in Revolutionary France brought no real improvement for the poor because the country lacked the necessary economic growth and tax base.

Developments in Britain were crucial. Cotton textiles were a major sphere of economic transformation as well as growth, as well as being linked to personal hygiene. The burning down of Arkwright’s new factory at Birkacre near Chorley in 1776 by rioters angered at the pay on offer, is a stark reminder of the divisiveness of this transformation, but the cotton mills he and his partners built from 1771 greatly increased production, and Arkwright was a key innovator, producing smooth, firm and even yarn in a continuous process of manufacture on his water frame. In 1773, he produced a cloth solely of cotton, an innovation in England, and in 1775 brought out a patent for a series of changes allowing the entire process of yarn manufacture to be performed on one machine. Initially reliant on water power, Arkwright in 1790 joined an increasing trend and installed a Boulton and Watt steam engine in his Nottingham mill. He was a key instance of industrialisation as a demonstration of potential, of the development of powerful comparative advantages in trade and manufacture in the British economy, and of the sense of progress that impressed foreign visitors and ushered in modernity with its complexity and possibilities for wealthier societies and ones in which large numbers were freed from arduous manual work.

To present industrialisation in terms of victims is an aspect of an anti-modernism that is incompatible with our living standards and the size of the world’s population. Moreover, it is an account of past, present and future in terms of losers and winners, with the latter seen as a destructive minority and our past identity and achievements only fit for relegation to obloquy. This might suit the disciples of Jeremy Corbyn and Greta Thunberg, but it is not English heritage or part of the national trust.