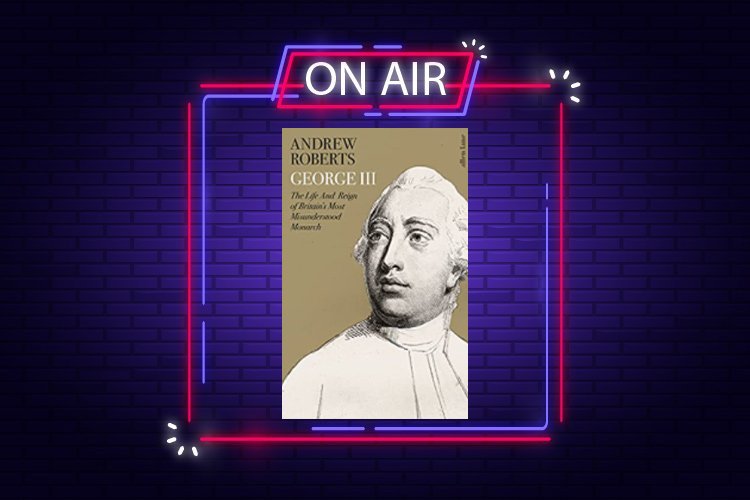 In a new podcast for the History Reclaimed Book Award we talk to shortlisted author Andrew Roberts about his acclaimed book: George III: the Life and Reign of Britain’s Most Misunderstood Monarch. 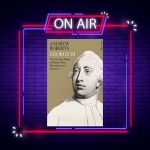 Described as a provocative and hugely detailed reconsideration of George III – who had the longest reign of any King of England – “myths” about his mental health and how he supposedly “lost” America are still referenced today. It is said to be the most important, well-researched and sensitive fresh study of any British monarch in the last 50 years.

The playwright Alan Bennett and the film and theatre director Nicholas Hytner also found George III to be good copy. Indeed Hytner’s 1994 film received serval Oscars. But Roberts says George’s mental illness, for which he received cruel treatments, would be recognised today as bipolar disorder, not porphyria, and that he should have been more sympathetically attended to.

Roberts’ research has also uncovered new fact about his wife Queen Charlotte, to whom he was lovingly and faithfully married, and had 15 children with, 13 of whom survived: “She was a fine Queen, and a very good woman. It was a loving and happy marriage until this dreadful disease killed it off”, he says. He later commented: “She was interested in music and reading, and she comes over as a much more engaged figure and completely different to the one portrayed in Bridgerton.”

Roberts explains how he conducted his research: “Since 2015 The Queen has put some 200,000 pages of The Georgian Papers Programme online. It is a wonderful collaboration between Kings College London, where I am a visiting Professor, and the Royal Archives. About 100,000 of them are George III’s papers and correspondence. They shed a completely different light on the personality and character of George III.”

Roberts was curious about George III’s mental illness and thought Whig historians had given him a “bad time” in the 19th and 20th Century. He also explores and re-explains some of these other myths, including that he was a “tyrant”, and that he “lost” America.

Roberts continues: “The doctors didn’t understand mental illness at all then. He was treated in exactly the wrong way for someone who has bipolar disorder. He was straightjacketed for days on end, he was cupped, which is a horrible process, he was shut way. It was a brutal sort of torture process and all un-necessarily.”

On the Declaration of American Independence Roberts says only two of the 28 charges against George III hold water (Parliament’s powers over taxation and vetos over legislation): “There are criticisms of things about George III that he never did and for things every King and Queen did going back.”  He says that to justify their actions, they had to demonise their legitimate sovereign by portraying him as a tyrant, although the time was right for Independence: “It came at the right time and the Declaration, although it gets so much wrong, it was an incredibly powerful rallying cry for the Americans,” he says. His 28-chapter book covers this in detail.

Furthermore, George III never brought or sold a slave in his life and never invested in a company that did that. He signed the legislation that abolished the slave trade. “It’s wrong for him to be held on a lower moral plain,” says Roberts.

Roberts tells the story in the podcast about George III wondering round the countryside by himself, dressed as a normal English gentleman: “He was nicknamed Farmer George, but it made him popular, at that stage 80 per cent of the population took their livelihoods from agriculture.”  He says there are “interesting parallels” between George III and Prince Charles who is known to admire him.

Roberts would like George III to be remembered for being: “An enlightened Monarch, whose library forms the kernel of the British Library today. Who was interested in supporting Georgian architecture, who had a great deal of interest in telescopes and the planet Uranus was named after him. He had a fascinating love of music and brought Mozart over here. He was really at the cutting edge of the enlightenment and his collection of scientific instruments was the largest in the World. He was interested in art and founded the Royal Academy. He was a misunderstood and underestimated figure and if my book helps rectify that I would be delighted.” 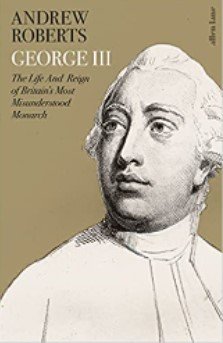 Grab your copy of the book on Amazon