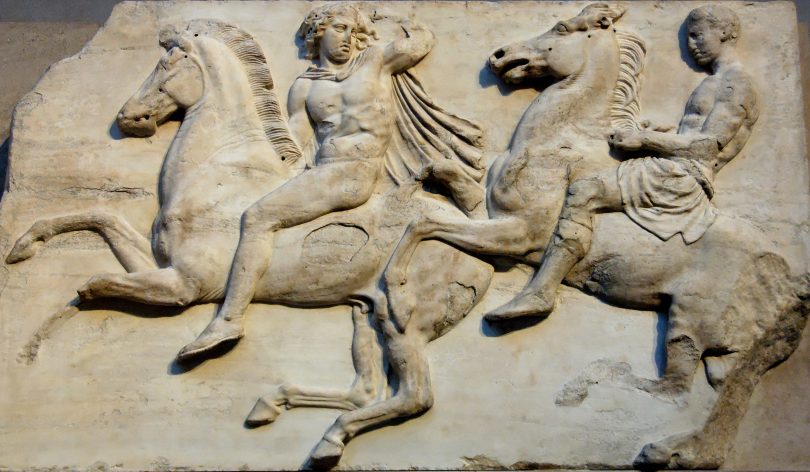 A new website on the Parthenon frieze, despite misplaced attacks on Lord Elgin, shows virtually as much of the great work as is possible, including how much has been irreparably lost and how much Elgin saved. Far from being an argument for removing the Elgin marbles from London, it enables the figurative cycle of the Parthenon to be at the same time split and whole, in Athens and in London. This material division is itself part of the history of our culture, and the key to the frieze’s universal fame.

Early this month, the Greek Ministry of Culture put online a new website honouring that great universal work of art that is the Parthenon Frieze. The carved blocks of the frieze are beautifully illustrated, unifying images from the British Museum, the Louvre and the Acropolis Museum in Athens, all with detailed explanations about each one of the figures represented, the themes, and about the building itself. As a Classical scholar, I could not praise the initiative enough.

Navigating the website though, while casual observers will limit themselves to appreciating the beauty of the carvings, the clever composition and the solemnity of the scenes, other more careful users will take note of some of the details, such as the little indication of the physical location of each slab. Of course, the fact that the frieze is split between London and Athens (with some minor portions elsewhere in Europe) is well known among scholars, estimators and members of the greater public alike. Also known is the fact that the reunification of the frieze has been at the centre of a hotly contested diplomatic dispute for more than 200 years, with voices taking sides both in favour and against the reunification of the sculptures. My scientific reluctance to concede to the supporters of the emotional argument for reunification is already on the record, so here I shall focus on the website.

The first thing that jumps to the eye then is the continuous repetition of the two letters “BM” (for British Museum) slab after slab under what is the majority share of the frieze. Given the tone of the marbles debate, it is difficult to imagine that this may be aimed at anything other than sending a clear message to the user. All the more so if we consider that the site is a direct emanation of the Greek Ministry of Culture, which has the repatriation of the Elgin Marbles as one of its key policies. In its own subtle way, the website repeats to the user the same mantra: the frieze is no longer one and the greatest part of it is now in London. Just as expected, the historical note does not miss the chance to stress how Lord Elgin “violently removed from the ruined Parthenon as many sculptures as he could”, a much-abused cliché. I find it sad that an opportunity for historical communication should be turned into a tool for yet another ideological attack.

And yet, there is another aspect of this website that should catch our attention. Apart from the photographs of the extant blocks of the frieze, most of the missing parts are integrated with the sketches drawn by the painter Jacques Carrey during his visit to Athens in 1674 as part of the entourage of the French ambassador, the Marquis de Nointel. These drawings are extremely important, as they offer us a glimpse into what the frieze looked like just a few years before the building was hit by a Venetian grenade during the Turco-Venetian war. Additional drawings were made in 1751 by James Stuart, an English architect and antiquarian who published his measured drawings of the monuments of Athens with Nicholas Revett between 1762 and 1816, and these are included on the website as well.

During Lord Elgin’s time, these drawings were the best and most complete pictorial representations of the Parthenon available to Western travellers, and they had been instrumental to the diffusion of the knowledge of the monuments of the ancients among the cultured. They also constitute an unrivalled record of the state of the marbles before Elgin’s arrival, documenting the dilapidation of the monument over the preceding decades. Heads, pedimental figures and even entire slabs, present in the sketches, were already lost by 1801. This is the context in which Lord Elgin matured his resolve to remove the marbles, and I am happy to see the user being enabled to step into his shoes and even to understand the feeling of urgency he must have experienced.

What emerges clearly from those drawings is how much of the frieze has been irreparably lost to history: fragments and entire slabs being scattered by the explosion and then mainly reduced to mortar by the locals during the two centuries after the blast. Even more important is what they don’t give us: images of the sections of the frieze demolished when the temple was transformed into a Christian church, centuries earlier, and whose consistency we can only hypothesize upon. What this website is telling us – probably involuntarily – is that no matter what we do, repatriation of the Elgin Marbles included, the frieze of the Parthenon will never return whole again.

Despite the ideological subtext of the website, I praise the fact that there is a place in the digital world where the procession in honour of the goddess Athena can once again unfold in (almost) all its glory. The progress of virtual reconstruction techniques in the last decade has had a great impact on the way we perceive, communicate, and consume archaeological remains and understand the people who left those traces behind. The virtual world is the proper place where we can experiment with hypotheses and reconstructions, leaving behind the risks associated with the fragile state of the archaeological remains and the political or ideological implications involved in this delicate process.

And yet, once we are happy with the result, we should resist the temptation to consider it a sort of staging phase preliminary to a physical reconstruction. The divided materiality of the frieze has a place in the history of our culture, its bilocation the key to its universal fame. Thanks to the technological progress, the figurative cycle of the Parthenon can now be at the same time split and whole, in Athens and in London, in its local context and yet universal.

We should not have to choose one when we can have both. After all, as in many other circumstances of life, not all of what is possible on a computer screen must, because of this, also be done in real life.